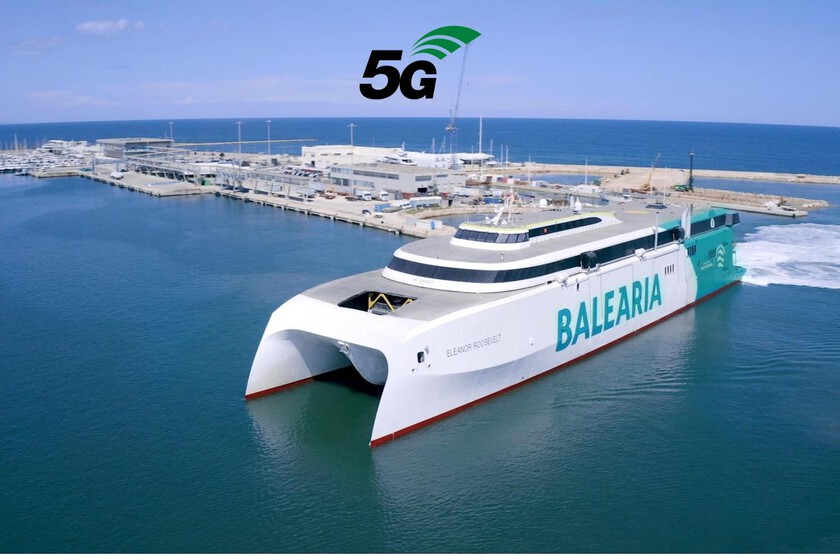 Share
Facebook Twitter LinkedIn Pinterest
The 5G not only does it bring with it the well-known advantages for users, but it also opens the doors to innovative proposals in network deployment, such as beam-forming techniques in mmWave, offering coverage where previously it did not reach 100% of the territory thanks to antennas carried into space, or have coverage on ships during their journeys at sea as Telefónica has just announced.

This is a new use case, made for communications with land from the ship ‘Eleanor Roosevelt’. use the 5G Ship to Shore solution which makes it possible to provide 5G coverage at sea from the coast up to a maximum of 100 kilometers away.


5G coverage in ships that are 100 km from the coast

Telefónica and Baleària have developed a 5G connectivity project on maritime routes with the application of these communications to the Eleanor Roosevelt ship on its Denia-Ibiza route. To do this, they have used the 5G Ship to Shore solution, which consists of providing 5G communications with antennas both on the coast and on ships that are sailing at a distance of up to 100 km. From the shore.

The aim is to provide a series of boat operation services such as data transmission, connectivity for the ship’s infrastructure, diagnostics and remote control, etc. with low latency communications more efficient than current satellite solutions.

In this pilot, Telefónica has deployed a 5G SA (Stand Alone) network in the 700 MHz band to get maximum range. In said coverage, a specific configuration of the antennas for long-distance communications called Extended Cell Range has been enabled, tested for the first time in 5G SA and which also requires antennas at heights greater than 150 meters above sea level to solve the terrestrial curvature. To maximize range, the ships also have high-gain antennas located on the upper deck.

This infrastructure is interconnected with a system that in the future will be able to transparently group all the ship’s communications (4G, 5G, satellite, etc.) as if it were a single end-to-end secure connectivity, for greater simplicity, and a fleet monitoring and management software.

As Leonor Ostos, Innovation Manager at Telefónica Spain, has pointed out,

This project represents a further step in future communications for maritime infrastructures. The needs for coastal connectivity are much higher than one might think and they do not stop growing. From passenger ships, merchant ships, coast guards, rescue services, etc. to future unmanned vehicles or USVs (the “drones of the sea”), where remote control will be essential to operate. In this case, we have deployed 5G SA communications with low latency, on which the use of state-of-the-art technologies such as artificial intelligence algorithms could be generalized for, for example, route automation, real-time decision-making or automatic tele-piloting.

The application of 5G connectivity in a Ship to Shore model will allow the ship to access updated information on passengers and operations, while the shore teams will have the necessary telemetry to be able to monitor and make decisions in real time.

As Francisco Abril, director of IT Infrastructures at Baleària, points out. “This pilot opens the doors to the reduction of the connectivity gap currently suffered by maritime transport users. With a range of 100 km from the antenna to the ship, this technology makes the creation of a 5G maritime corridor technically viable that allows uninterrupted, low-latency and high-speed connectivity, on routes such as Dénia-Ibiza or Ibiza-Palma” , he concludes.