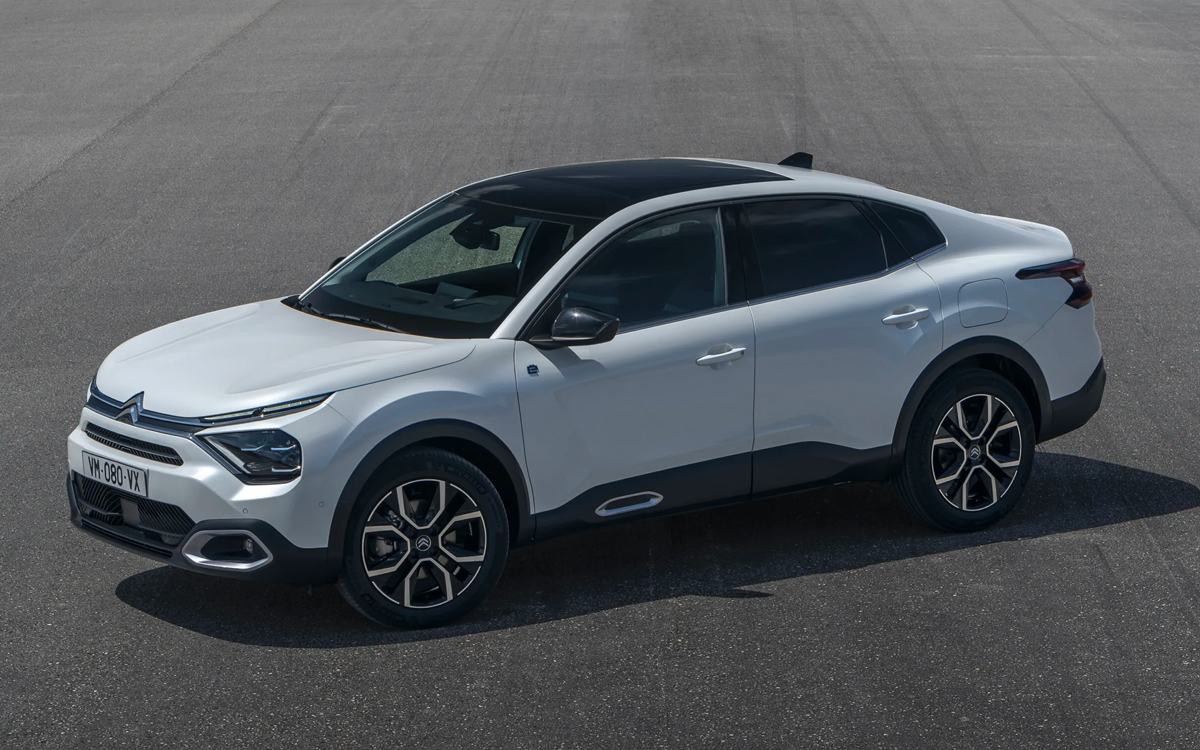 In January 2021, Citroën launched the ë-C4, a confirmed copy of the new C4 with electric motorization, based on the e-CMP platform common to all brands of the PSA group. With this car, we found this particular design, between sedan, SUV and Fastback. During our test, we also praised the comfort on board and the price/equipment ratios. Two good points unfortunately offset by consumption far too high and autonomy still too fair.

However, Citroën has decided to swell the ranks of the C4 range this Thursday, June 30, 2022 (the prices were revealed on October 14, 2022 and are displayed at the end of the paper). In effect, the chevron brand has just officially presented the C4 X and ë-C4 X, two new raised sedans. In this article, we will focus mainly on the electric variant of the latest Citroën. Motorization, autonomy, recharging, equipment, performance, we take stock together.

Contents hide
1 An atypical design between SUV, sedan and fastback
2 136 hp and 360 km of range for the ë-C4 X
3 Citroën expects prices significantly higher than those of the competition

An atypical design between SUV, sedan and fastback

As you can see with the different visuals, we find this characteristic silhouette on the border between a fastback and a coupe SUV. The presence of an electric motor is first materialized by its blue inserts on the rocker panels and near the foglamps, while the letter ë is engraved on the tailgate or on the fenders.

With a length of 4.6 meters, the Citroën ë-C4 X has a more generous trunk than the classic C4, with a capacity of 510 liters. Additional storage space is also accessible under the boot floor. Of course, the sedan is based on the e-CMP modular platform of the Stellantis group (the parent company of Citroën.

This battery gives the ë-C4 X an autonomy of 360 km in WLTP cycle, and thanks to the regenerative braking system, users will be able to recover some energy during braking and deceleration phases. For charging, we can reach 80% in just 30 minutes on a 100 kW direct current terminal. Using a 7.4 kW (32 A) Wall Box, charging will take 7.5 hours via single-phase power, or 5 hours via three-phase with the 11 kW on-board charger (available as an option).

In terms of equipment, the Citroën ë-C4 X focuses above all on comfort, with Advanced Comfort seats, a suspension with progressive hydraulic stops (for less jolts in the passenger compartment), and two control screens, one of which is dedicated to the 10″ infotainment equipped with the MyCitroën Drive Plus system. There are also several driving aids, such as collision risk alert, blind spot monitoring, driver attention alert, head-up display, or even Park Assist, not to mention Level 2 autonomous driving.

Citroën expects prices significantly higher than those of the competition

This Friday, October 14, 2022, Citroën has finally unveiled the prices and the different variants of its new thermal and electric sedans/SUVs. Regarding the C4, it will be offered in two petrol engines, and one diesel engine, from €27,650 including tax.

As for the E-C4 X, it will display up to 360 km range in WLTP cycle with an electric motor of 100 kW and 136 hp, as well as a fast recharge of 100 km/10 min at 100 kW in direct current. In the Feel version (entry level), which offers a jumble of dual-zone automatic air conditioning, Citroën Advanced Comfort suspensions, the Safety Pack, the automatic electric parking brake and 18″ Aerotech hubcaps, the price is set at €39,950 including tax.

The bill rises to €43,350 including tax for the Shine Pack version (top of the range), which notably offers level 2 autonomous driving features with Park Drive Assist and Highway Driver Assist. According to the chevron mark, the new C4 and E-C4 X are available to order in France since October 13, 2022and they will land in the usual points of sale from the first quarter of 2023.