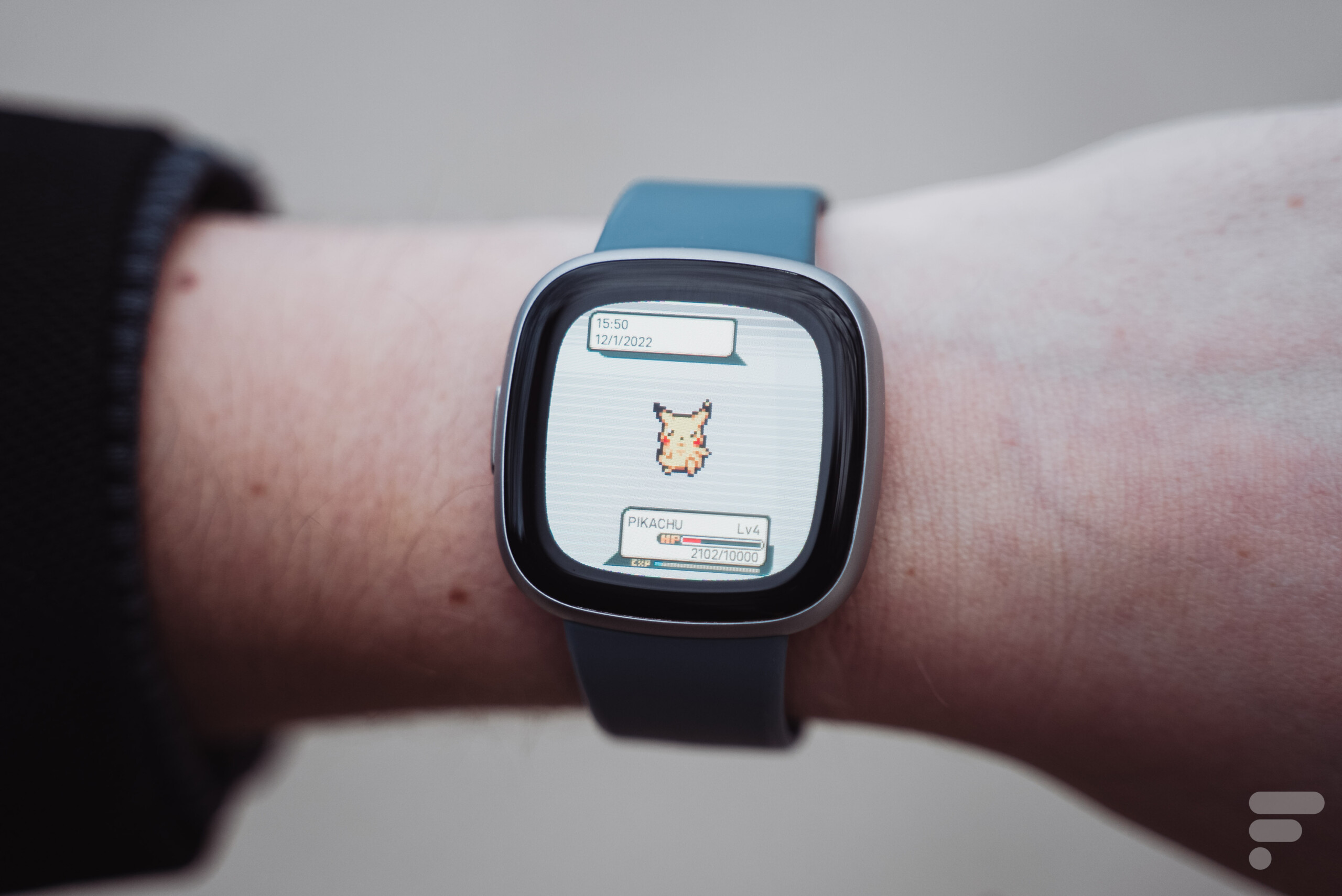 The Fitbit Versa 4 that we are testing here is very close to the Fitbit Sense 2, which disappointed us a little. It has the advantage of unloading its technical sheet and therefore its price a little by abandoning the most advanced functions, the ECG, as well as the sensors dedicated to temperature and stress.

Remember that Fitbit, owned by Google, must now deal with Google’s Pixel Watch. With this in mind and with its light technical sheet, is it interesting or should you go your way?

This test was carried out with a watch lent by the brand.

The Fitbit Versa 4 resolutely sports the same design as the Fitbit Sense 2, namely that it is a rectangular pebble to which two bracelets are attached with a proprietary clip. The silicone strap supplied with the watch is rather well designed with its double buckle fastening system which keeps it firmly attached. On the other hand, I had to suffer a trace of significant irritation at the level of the wrist. Difficult to accuse the watch with absolute certainty, but you have been warned.

The watch is light and easily forgotten on the wrist. Its metallic outline gives it a premium feel that works well. Under the watch, we find the sensors and their special arrangement that we only find at Fitbit, as well as a plastic coating. Note that I found many scratches on the latter.

Let’s not forget that the watch is resistant to both water and dust thanks to an IP67 certification.

The screen is definitely the same as that of the Fibit Sense 2, namely a 1.57 inch AMOLED screen with a definition of 336 x 336 pixels. The infinite contrast of course makes it possible to highlight the dials with a black background and to forget the rather wide borders. Another advantage: the autonomy comes out increased, since each black pixel is an off pixel.

The biggest flaw of this screen is undoubtedly its low refresh rate (we don’t know the figure), which gives an effect jelly when scrolling. On some dials or some menus, there is also aliasing which is a shame on a screen with a density of 301 pixels per inch (ppi).

Basically, five dials are installed, but you can of course get others on the Fitbit app on your phone. Be careful, a good part of them are paid or reserved for Fitbit Premium subscribers. More annoying, the price is never indicated on the front, which leads to disappointment when we see a dial that we like and which actually requires going to the cash register.

Three levels of brightness are offered to you, which are then coupled with automatic brightness management. I spent the majority of my time on the medium setting which I found to be quite effective, although a bit dark here and there. The sensor to turn on the screen is very effective, except when running, which is a bit annoying for a sports watch.

Most watch faces incorporate an always-on screen mode, which can be disabled with night mode.

Fitbit Versa 4Use and application

We need to talk about performance. Yes, with connected watches, usually, the subject is not the most pressing. From the moment it’s roughly running, there’s not much more to say.

Well precisely, the Fitbit Versa 4 does not run very well. I had frequent jerks, small freezes of a few seconds here and there. For a 200 euro watch, that’s still a problem. Moreover, I have never seen a watch take so long (20 minutes) to update. Some dial changes via the app were unsuccessful or took a long time to complete as well. I specify that I went through a Pixel 7 Pro which we cannot suspect the lack of integration with Fitbit, since they are brands carried by Google.

If we add to this general observation that the interface of the watch is completely outdated, whether in terms of aesthetics or functionality, and you will have an idea of ​​the experience of wearing this watch.

On your watch, you can’t do much. The settings menu is very light: display, vibration and microphone management, notifications, goal reminder, calm and shortcut modes. Almost every time, the settings are limited to a simple choice between enabling or disabling a feature, or choosing its intensity between various parameters. We are far from the freedom left by Wear OS watches, but even traditional sports watches generally manage to integrate a little more control.

As often with watches focused on health and sports, the app will bring together the bulk of the details and allow you to really take a step back. There for once, we feel more in line with the expectations of a connected watch in 2022.

The Fibtit app is clear, readable and pleasant. It incorporates many metrics such as stress management, resting heart rate, number of glasses of water taken that day, etc. The application, without being revolutionary, is suddenly a little frustrating to use as it meets the expectations of a connected watch buyer more than the latter. However, this opposition will undoubtedly be able to delight those who cannot stand being too connected. The watch offers a light connection just for sports and the application allows you to go further when you want. Why not.

Unfortunately, some features that are a little different from the mass are reserved for Fitbit Premium. At least the watch offers you six months of subscription after its purchase, but once this period is over, you will no longer be able to access it. Here are the five premium features: Daily fitness score, sleeper profile, noise and snore detection, advanced sleep analytics, wellness report.

Let’s start with what is perhaps one of the strangest decisions I have ever seen. So we have a watch with a button. When I was running, I tended to have a little trouble triggering the automatic motion sensor. Never mind, I tell myself, I’ll activate the screen by pressing the button. And there, whammy, pressing the button paused the training. It seemed to me to be total nonsense, because, in full effort, one does not always have the patience to wait for the motion detector (here very slow) to understand that one is trying to look at the watch to know what time it is.

Let’s move on from this inconvenience and now look at the real capabilities of the watch in sporting matters. We start with the GPS.

The Fitbit Versa 4 incorporates a single-band GPS chip. This allows you to follow your route without going through the smartphone’s GPS. Convenient to maintain the autonomy of this one or if you want to go on a sports session by giving him the wrong company.

The Versa 4’s GPS tracking does pretty well when compared to the Google Pixel 7 Pro, even if it sometimes gets off the mark. You can also have some tracks that intersect houses, but overall it performs its tracking role valiantly.

On the distance covered, it is a little more debatable. Where the watch measured 2.88 kilometers on a small outing, my smartphone recorded 3 km. In the other direction, on an outing, the watch recorded 5.09 km against 5 km on the phone. That being said, it should be noted that the watch apparently continued to record the race a few seconds longer than the telephone, which is altogether strange behavior and which can falsify the result if you are used to stop after stopping the exercise on the watch.

Let’s finish by pointing out the fix, that is to say the time to obtain the GPS connection, is relatively long before starting the race. For some reason, once the race started, however, it is done very quickly.

Fitbit is a brand that has become known for its positioning on connected health and sport. We therefore expect a good performance in terms of heart rate monitoring. It’s not exactly that.

On output at a relatively regular pace, we see that the watch takes a long time to start up, more than five minutes to display values ​​close to reality. For the rest of the race, we see more or less correct values, except in the last two peaks where the watch struggles to keep up. 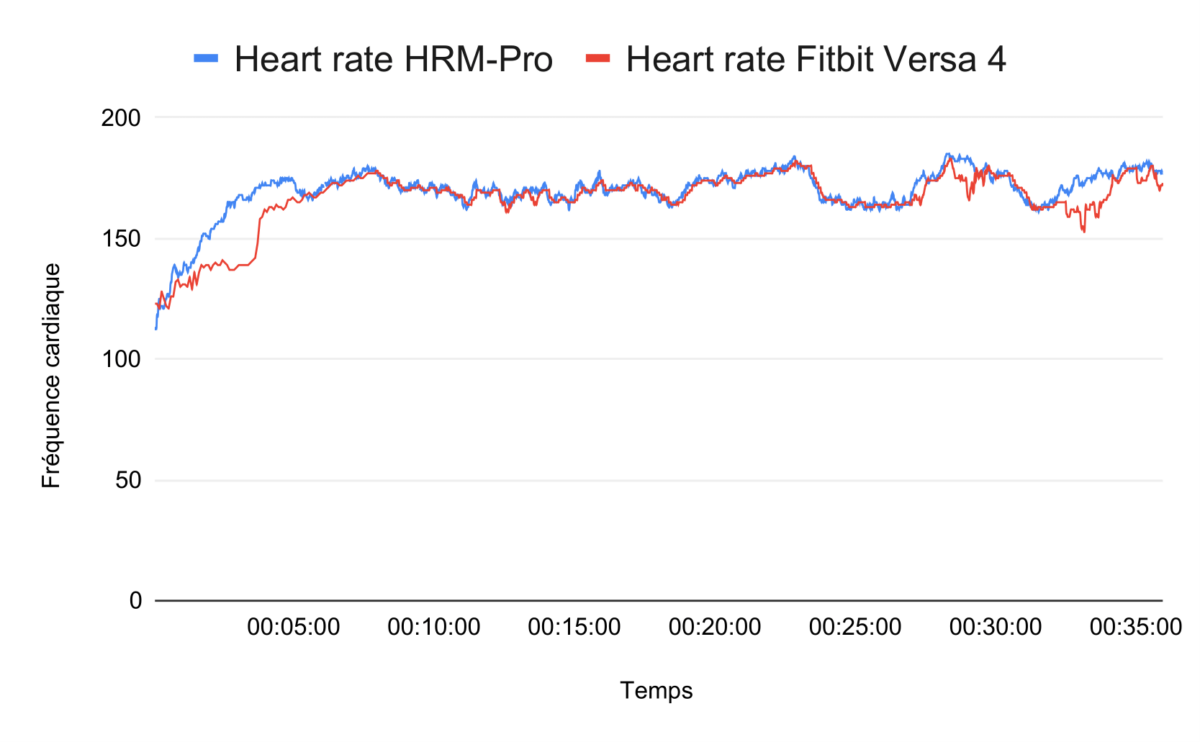 In interval training, we find these same defects: the start is bad, with more than five minutes to get up to speed. Then, the measurement is correct, there is a slight latency, but nothing serious as long as it is regular. On the third peak, we still see some values ​​very far from reality and the same applies to the last peak. 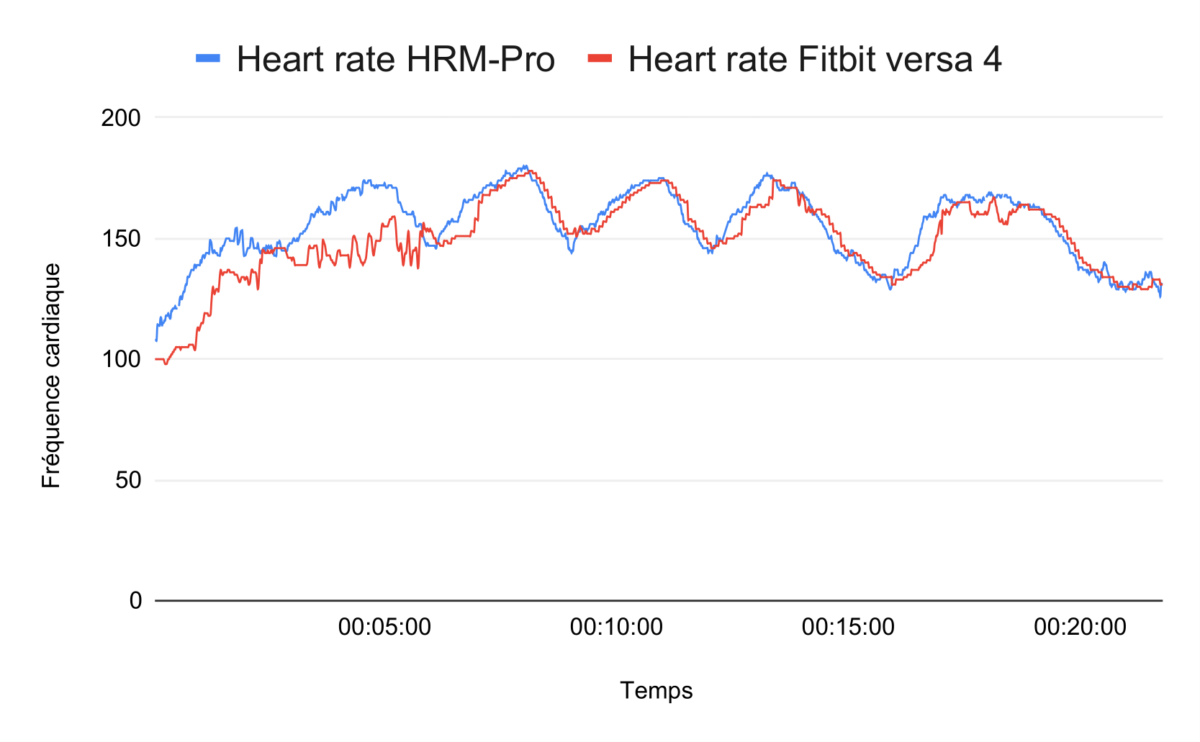 The autonomy of the watch can bring a little positive in this poor Fitbit Versa 4. The watch easily lasts ten days without always-on display and with sleep and heart rate monitoring on.

With the always-on, we drop between 5 and 7 days depending on your use of the GPS. The latter tended to reduce the autonomy by some 5% for a race of about forty minutes.

Like the Sense 2, the Fitbit Versa 4 only goes through the phone’s Bluetooth for all watchface updates and downloads. Wi-Fi is absent, despite an integrated modem.

For the rest, the watch includes a microphone that allows you to respond to text messages in voice dictation. You can also use emojis or pre-recorded messages. I haven’t been able to make calls with it.

The watch incorporates a satellite location chip. It is compatible with GPS and Glonass. Note also the presence of an NFC chip to pay with Fitbit Pay or Google Pay.

Fitbit Versa 4 at the best price?

24 technology news to start the morning informed of the latest

Samsung Galaxy S23 Ultra clicked such a picture of the moon! Elon Musk was also surprised to see

the government promises 100,000 terminals before the summer of 2023

The Common Ways Of Knowing About Bitcoin