Share
Facebook Twitter LinkedIn Pinterest
Contents hide
1 What should we avoid to clean a thermal paste?
2 How do you clean thermal paste from a processor and its IHS?
3 Products to remove thermal paste
3.1 Arctic Arctic Clean
3.2 Noctua wipes
3.3 Arctic MX Cleaner

What should we avoid to clean a thermal paste?

Before starting, we will tell you that what we are going to relate is perfectly applicable to both processors and GPUs of graphics cards, only it is much more likely that you will do it more times with your processors than with graphics.

In case of lack of isopropyl alcohol (which is not “bad” as such, but it is not recommended) we should not use substitutes such as lemon juice or its derivatives, something that seems to still have a reputation in certain sectors.

These do not help dissolve the silicone that binds the particles of the paste, but rather creates a chemical reaction with the nickel due to its high acid concentration and slightly oxidizes the surface and, above all, damages it microscopically speaking.

In the event that the thermal paste is solidified (because of time, temperature or because it is of poor quality), meaning that it is more or less hard, it should not be removed with any rigid element, be it spatulas, cards or the like. The remains could jump to nearby components in case we have the PC next to us.

In this case, the best is again ArcticCleanwe will only have to take a few drops and wait a few minutes for it to take effect and then begin to remove it. 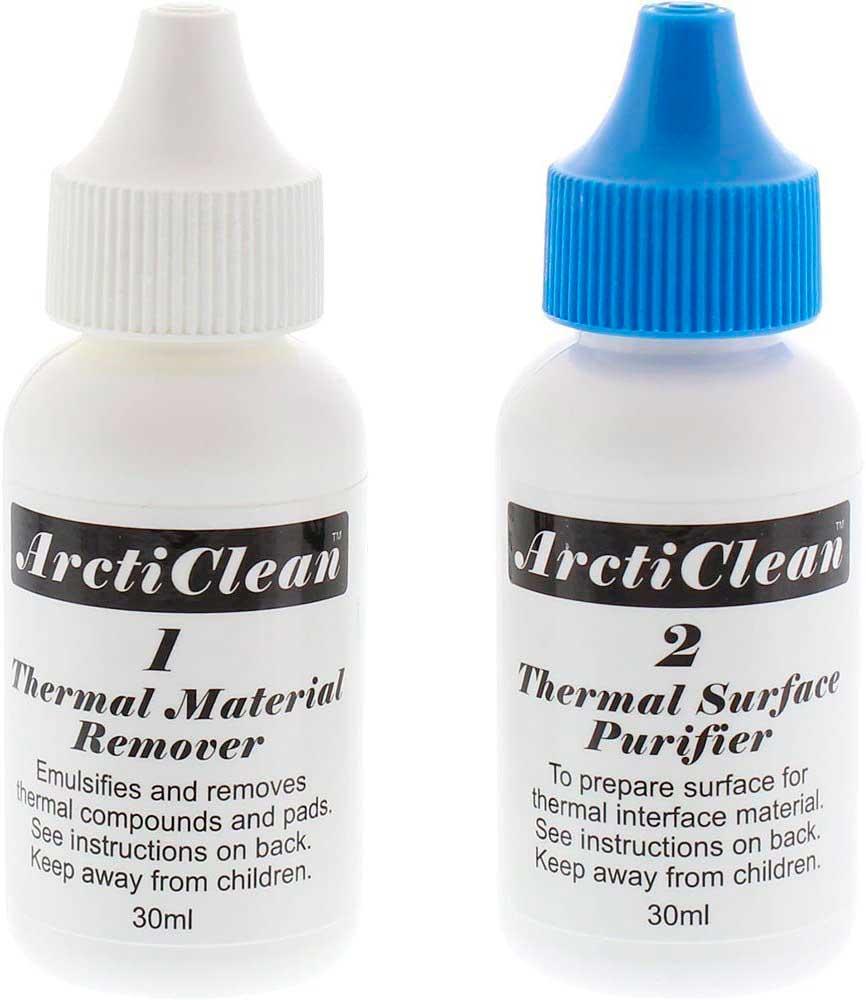 With the pasta already soft or dispersed, we will take a cotton cloth end that we have mentioned before and we will bypass the IHS of the processor. In this way, we will remove most of the thermal paste that is on its surface. Later we will rub the surfaces where there was paste until all traces of it are removed and always leaving the product to act. If we are talking about wipes, then the removal can be done without any problem and without waiting, but we have to make sure that the surface is perfect.

Of course, everything explained would be done in the same way in the CPU block or in the heatsink, except that in the second if it does not have a cold plate and it is Direct Touch through heat pipes, we will have to take into account that the thermal paste gets into between them and it is convenient to stop and try to get it out of there so that it does not interfere with the heat transfer.

Obviously, a liquid product will work better than wipes for obvious reasons. This done, we just have to let the processor dry a bit and the heatsink (a couple of minutes is enough) before apply the new layer of paste.

You have to be very careful with isopropyl alcohol, since it is a type of alcohol that occurs in a very high concentration and, if it is consumed in large quantities, it can reach be deadly to people. In the same way, since it is an alcohol, it is convenient that do not handle near a flame.

In fact, and we insist again, isopropyl alcohol is not indicated for this task, because despite the fact that the laboratory alcohol is very pure, it continues to leave traces of the same paste or powder, remember that it does not dissolve fats or materials. that make up modern pastes, so it only acts as a lubricant and separator like an oil between two friction pieces. It goes without saying that we should avoid any oil or type of alcohol (let’s not talk about 96º) to remove the thermal paste, and even less so when there are products for just over 10 euros that are safe and specific and will last us a long time.

How do you clean thermal paste from a processor and its IHS?

What may seem easy is not so easy. In the first place, what we must have are good materials to do it, something that we will address later and, above all, be clear about which ones we should not use.

To remove the thermal paste, the first thing we have to be clear about is that we must not do it with the processor punctured to the motherboard and much less if its retention system is open. The processor has to be removed and placed on a clean, soft or shelled surface (if not, its blister) and stable, lest it drop. 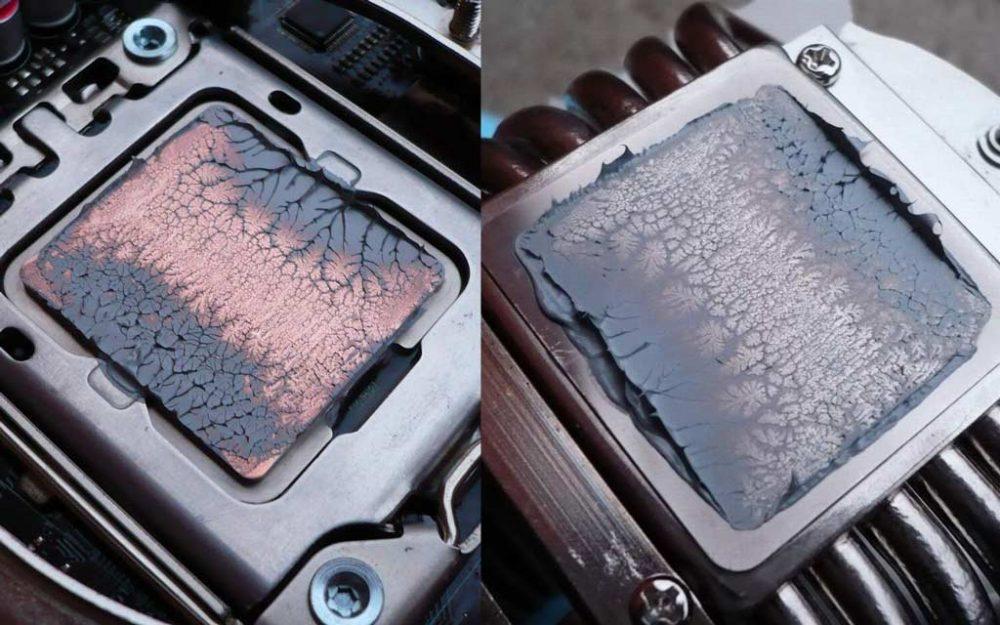 Once this is done we will have to have either a microfiber cloth that we are not going to use anymore, paper or even cotton swabs. Removing it from the IHS does not have any major complications with the products that we will see below, it is simply removing material from the surface of the IHS and replacing what is already with paste for a different area or unit.

What we do have to take into account are the edges of the IHS and the base of the processor that touches them, since there the excess thermal paste is a problem and must be removed so that it does not fall on the pins or socket. Here a cotton swab is ideal, especially one that does not come apart easily and is of quality.

In graphics cards, the system is the same, only you have to be more meticulous with the SMDs and resistors that they may have around them. The ideal is to remove the paste with cotton swabs also in these places, where we have specific products for this.

We know that for many isopropyl alcohol is like the holy grail in this matter, but the reality is that it has more shadows than lights. What we need is a product that either removes or dissolves the oils and fats/silicones that thermal pastes use as a base, whether they are liquid metal or traditional capacitive ones.

Isopropyl alcohol does not achieve either of these two things, the only thing it does is create a dispersion of the pastes that allows its partial removal and based on wasting material, with the consequent danger that it falls where it should not. 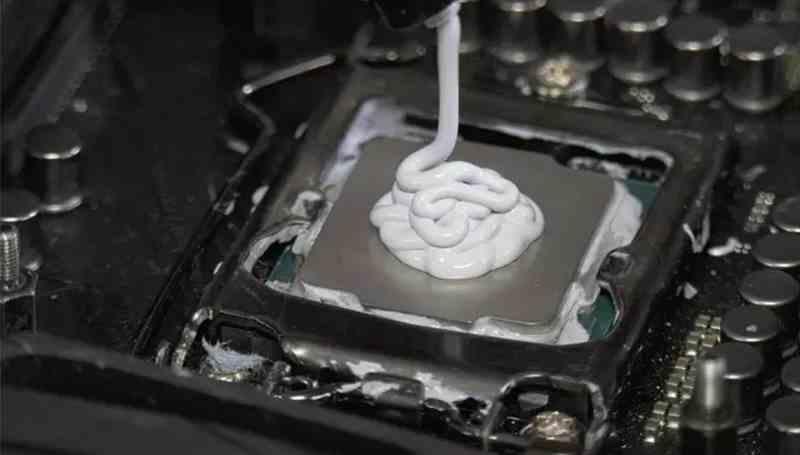 Not that it’s unsafe as such, but mixed with the paste it can cause damage if it falls where it doesn’t have to.

For this reason, we go with professional products that not only guarantee these two key points, but also protect from corrosion, IHS or die, leaving the surface ready for the thermal paste to adhere in the best way:

Is he best product existing despite the fact that it has been sold for more than 20 years. There is no product currently on the market that comes close to the dissolving power of these two compounds used in tandem. Nothing resists them, they clean, prepare and protect the surface, it’s cheap, it lasts a long time and it’s tremendously simple to use because with a few drops and letting compound 1 rest we will see how it dissolves or separates the paste to be removed.

What compound two does is purify the surface, finish cleaning it in case there is any microscopic remains and above all protect the silicon die or the IHS, depending on whether it is GPU or CPU.

Is another very valid option to clean the thermal paste. They are typical-shaped wipes in individual bags that have a detergent-based compound that, by keeping them moist, allows the paste to be removed without too much effort. The compound is safe, so there would be no problem and with the spikes we can remove it.

It is basically ArcticClean in wipes. Logically, it does not impact the surface like a liquid, but it is just as useful. It does not contain compound 2 to purify and protect the nickel, but for what we need it is more than enough and they also come in boxes of 40 units and are very cheap.

And this is all we need to know about how to clean thermal paste from a processor or graphics card, isn’t it simple?