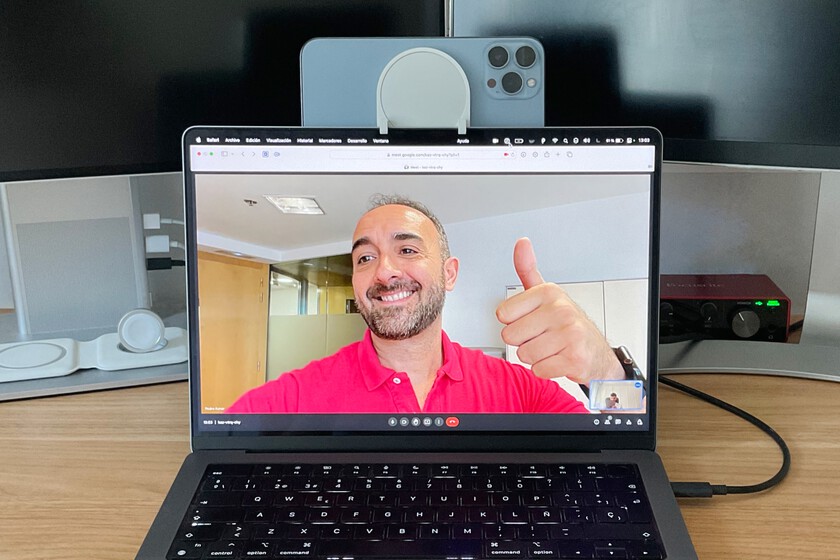 Share
Facebook Twitter LinkedIn Pinterest
A few days ago, the final boss of applesphere, Pedro Aznar, published a homemade and cheap way to create a support for the iPhone in order to use it as a webcam for the Mac, the function that macOS Ventura will release. While we wait for the final release, beta goes, beta comes; It is worth preparing the necessary infrastructure, even if it is with [música de suspense] an Ikea bag and a pair of clothespins.

One, who experienced a sudden pain in his left arm when he saw the final montage, recognized Pedro’s courage although perhaps his ambition could. And although the proposal of the tweezers is functional, there is no doubt, I thought it appropriate to look for more aestheticWhat does the youth say? A kind reader of this medium, triferoyou were kind enough to share with me some plans to print in 3D a support designed to “hang” the iPhone on the Mac screen. And in this way, being able to show your face in high definition during video calls.


Residual cost in material and a seamless experience

Once these plans are received, and while waiting for the usual suspects to launch their official proposals for thirty dollars or a similar amount, I went to Twitter to ask some Valencian with a 3D printer to help me print it, given that the business on duty was closed for the entire month of August… And someone appeared.

He printed the support in an hour and it was perfect. This model yes or yes needs a MagSafe charging base to be able to work, although only due to magnetism, it does not require power. That means that if we don’t want to sacrifice a MagSafe base, we can resort to a MagSafe clamping ring without electrical circuitry.

I tried to make a video call with Pedro and, beyond an incident with FaceTime attributable to using the Ventura beta, which forced us to switch to Google Meets, everything was perfect and he noticed the jump in visual quality when I went from the integrated camera on the MacBook to that of the iPhone. The adapter as it comes out of the 3D printer. The MagSafe charging base, inserted. It is necessary to be able to hold the iPhone.

The adapter weighs about 7 grams, so at the approximate price of rolls of PLA or ABS filament, about 20 euros per kilo, the cost of the adapter purely in terms of printing material would be around 15 euro cents. Then we would have to add the cost of electricity, amortization of the 3D printer, and of course, the work of the person in charge, who in this case did it kindly and altruistically. And so it is ahead.

An important nuance for those who dare to print this type of adapter: the screen of a MacBook is not designed to support weight, so it must be at a right angle. If we tilt it backwards, the iPhone will fall out of the adapter being embedded in such a fine thickness.

These types of objects are the ones that can get the most out of a 3D printer at home: everything that does not require wiring and can be printed in one piece, saving a lot of money compared to buying these products from third parties.

Now I have an adapter that will allow me to offer good quality video calls, without having to resign myself to a less than mediocre image on a 14-inch MacBook Pro from 2021. Because one can not help but think that if Apple’s solution to regular cameras , saying “now you can hook the iPhone to the Mac”, Samsung or Xiaomi would have given it, the laughter in these parts would have been heard in seven neighborhoods. But this is consumer electronics, like democracy, strange as well as beautiful.

Binance officially announced: It will be listed tomorrow

Binance announced in an official statement on Thursday, August 11 that it will add support…