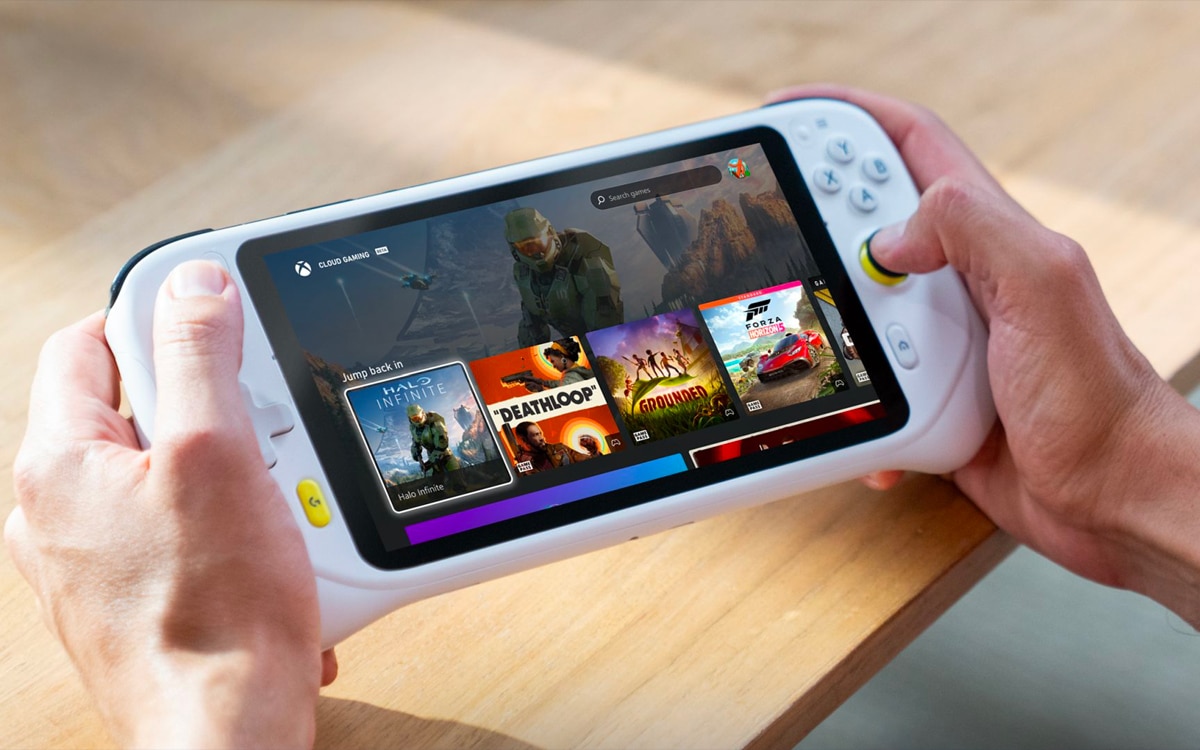 Share
Facebook Twitter LinkedIn Pinterest
Logitech has just officially presented the Logitech G Cloud Gaming Handled, a brand new portable console that looks like Nintendo Switch. This machine is dedicated solely to the use of cloud gaming services such as Xbox Cloud Gaming or GeForce Now, which are also preinstalled on the device.

On the occasion of its Logi Play conference, the Swiss manufacturer Logitech presented a brand new console: the Logitech G Cloud Gaming Handled. Although the machine shares similarities on the design side with the Nintendo Switch or Valve’s Steam Deck, the G Cloud stands out on one major point: it is dedicated exclusively to gaming via the cloud through the main services of the market like the Xbox Cloud Gaming, GeForce Now or even Steam Link.

Besides, these three services are directly pre-installed on the console and according to Logitech, the manufacturer has collaborated with the various publishers of these platforms to ensure optimal integration of console commands.

The thing was also announced with great fanfare by Microsoft via an official press release published this Wednesday, September 21. “Handheld consoles are a natural step in the evolution of cloud gaming, and it’s great to see a leader hardware world like Logitech to optimize Xbox Cloud Gaming for its new device”, can we read in the text of the Redmond firm.

Indeed, as soon as your Logitech G Cloud starts, it will be possible to directly access the Xbox Cloud Gaming service to enjoy hundreds of compatible titles from the Xbox Game Pass Ultimate catalog. Microsoft also specifies that the remote game function, Remote Play, is also accessible on the G Cloud. In other words, you will be able to stream all of your Xbox games in digital format directly to the Logitech machine.

But now let’s get to the technical part of the G Cloud. First of all, the console embeds a processor Snapdragon 720G as well as an October-core CPU clocked at up to 2.3 GHz. This SoC, which might seem limited for local gaming, is actually sufficient for the low-latency video decoding required by gaming via the cloud. The chip comes with 4 GB of RAM and 64 GB of internal storage spaceexpandable via microSD card.

In fact, note that the console has no fan, so it should be particularly quiet. By extension, the chassis is rather thin and light, as evidenced by its featherweight: 465 gramsalmost as much as an OLED Switch.

On the screen side, we can count on a 7″ IPS LCD panel in Full HD (1920 x 1080 pixels), with a refresh rate of 60Hz only. Too bad for subscribers to the RTX 3080 formula of GeForce Now, who will not be able to take advantage of 120 images per second allowed by their subscription.

In terms of audio, the G Cloud includes two stereo speakers, a microphone with ambient noise cancellation, a 3.5 mm jack portand supports Bluetooth 5.1 with aptXTM to keep latency to a minimum with wireless headsets and headsets.

A console for cloud gaming… without 4G/5G

In the radius of connectivity, it is here that the shoe pinches. Paradoxically for a console dedicated to cloud gaming, the G Cloud does not offer a 4G or 5G connection, but only an 802.11 ac WiFi connection (with 2×2 MIMO). In other words, the console is intended for home use only. To make up for this major pitfall, you should know that the G Cloud has a generous battery of 6000mAhwhich according to the manufacturer offers 12 hours of battery life.

For now, Logitech prefers to opt for a small-scale, limited-quantity launch. In effect, the console is only available in the United States and Canada at an introductory price of $299.99, before moving to the final price of $349.99. We suspect that the Swiss brand wants to wait to see how the G Cloud will be received in these territories before considering a larger-scale launch in 2023. In other words and in the event of commercial failure, there is a good chance that the G Cloud will never arrive in France.