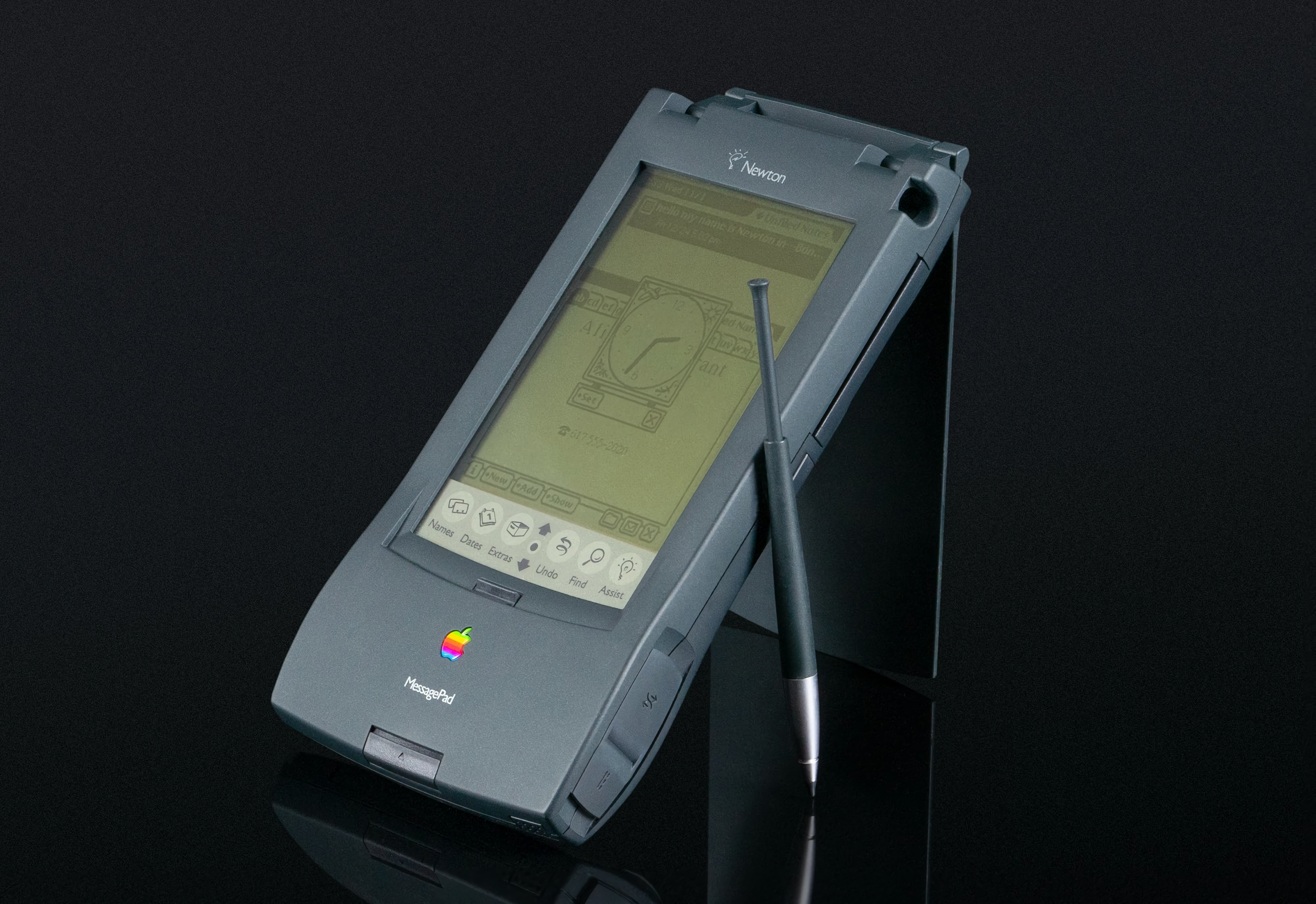 The nineties were not easy for Apple. Without Steve Jobs, the company was trying to carve out a niche beyond the traditional computing market, and that led to experimentation in other areas. This is how we came to know products such as the Macintosh TV, the hybrid between a video game console and an Apple Pippin multimedia player, or the Apple QuickTake camera, among many others. But none better represents that era than the Newton MessagePad.

For years, the Newton MessagePad—or Newton for short, to most—was one of Apple’s most recognizable products, but for all the wrong reasons. Although the device established the concept of PDA (Personal Digital Assistant) that later exploded from the hand of Palm, was the subject of all kinds of ridicule. The device was packed with bugs and it did not offer even a fraction of what it promised, at least not with the desired quality.

The most notorious case was handwriting recognition software, its most innovative feature. The technology was not advanced enough to achieve the results that Apple intended and promoted, and that earned it ridiculed ad nauseam. If it even served as inspiration for one of the most remembered scenes of The Simpsons…

In more recent years, and especially following the success of the iPhone and iPad, the press and public have begun to view the Newton MessagePad in a more positive light. Many consider that the Apple device he was ahead of his time and that, despite its technical problems and being a commercial failure, it established the foundations for what we see today —much more refined and better implemented, of course— in equipment with a multi-touch screen, such as smartphones and tablets.

Was the Newton MessagePad ahead of its time?

Before continuing, it is worth clarifying one issue. The Newton MessagePad was not a single device, but a family of multiple models released in a very short period of time. After all, Apple PDAs were on the market for only five years. However, in this article we will focus mainly on the first generation of the gadget.

The original Newton MessagePad debuted in May 1992 and did what Apple intended: grab the world’s attention. However, it did not go on sale until August 2, 1993. And once it was available on the market, it did not achieve the massive success that Californians expected. The reasons were various, from technical flaws in crucial features like handwriting recognition, to its high price.

When the Newton reached the public it cost no less than 900 dollars, which according to inflation calculators would be equivalent to about 1,861 current dollars. And what users got in return was a bunch of great ideas but poor execution. For handwriting, users had to “train” the device on their handwriting, but the process was cumbersome and didn’t work properly.

The other functions were far from being as revolutionary as they were proposed. The Newton MessagePad served as an address book, address book, calculator, and notepad. It also enabled connection to fax and email services, with accessories and services sold separately. But since the 4.5-inch screen was not backlit, it was necessary to have natural or artificial light in the environment to use it.

In its guts, the device featured an ARM 610 microprocessor with a power of 20 MHz, 4 MB of read-only memory and 640 KB of RAM. A very interesting function of the PDA is that it allowed send data between two Newtons through an infrared port. This not only served to share messages between teams, but also applications. Of course, the devices had to be in the same room.

In terms of energy, the first version required four AAA batteries that did not provide much autonomy and was also the subject of strong criticism.

It is worth noting that the software used by the gadget it was Newton OS, completely developed in C++; furthermore, the applications were created in their own development language, called Newton Script. The handwriting recognition technology was created by Russian Stepan Pachikov’s ParaGraph International, who licensed it to Apple.

Despite the original teasing, the platform evolved favorably with each software update, especially with OS version 2.0 that was released in 1996. However, by then it was already too late.

A complex and traumatic project

The idea behind the Newton MessagePad had its origins in the second half of the 1980s. The engineer Steve Sakoman began working on a secret project with the endorsement of Jean-Louis Gassee, who served as Apple’s vice president of R&D. Apple required the services of AT&T to develop the processor that would power the device, but the results were not as expected.

Those from Cupertino later discovered the work of Acorn Computers, the British firm behind the ARM architecture, and invested 2.5 million dollars to promote its development. Larry Teslaone of the key executives behind the project, published years later about it:

Apple had paid not one, but several million dollars to AT&T for the Hobbit processor. The Hobbit was riddled with bugs, unsuitable for our purposes, and too expensive. We resisted after AT&T demanded several million more dollars in development fees. Instead, we invested $2.5 million in ARM, less than we would have paid AT&T.

The move ended up being more than beneficial for Apple. According to Tesler, after ARM went public in 1998, those from Cupertino pocketed 800 million dollars; namely, a return on investment of more than 30,000%.

But back to the Newton MessagePad, Gassée and Sakoman left Apple in 1990 and the project was adrift. In between, those from Cupertino decided to create a separate company called General Magic, made up of several of the engineers who had originally been linked to the PDA. In this way they could continue their work outside the company, but with those from the block keeping a portion of the company.

However, Apple did not cancel its own plans with the Newton, but decided to reorient them with Larry Tesler and Steve Capps at the helm. This ended up being a source of conflict, since the developers who went to work in the new company they accused Apple of having betrayed them when he presented the Newton at the CES in Chicago, in May 1992. This subject has been treated in the documentary General Magic which was released in 2018.

When John Sculleythen CEO of Apple, showed off the Newton MessagePad in public, it was with a bit of cheating. The devices were connected to Macs for the demo, as they were too unstable to function on their own. A new test was scheduled for the CES in Las Vegas in January 1993. Those from Cupertino wanted the PDA to work completely independently by then, and this still required a lot of work.

The team in charge of developing the Newton MessagePad was put under an extreme level of pressure. It was even said that the stress of its members was comparable to that suffered during the development of the Macintosh, working up to 16 hours a day. The situation reached a breaking point with the suicide of software engineer Ko Isonoin December 1992.

After the traumatic event, Apple not only began to allocate more human resources to the project, but also psychological assistance to the workers involved.

The Newton MessagePad was a sales flop

When the Newton MessagePad finally hit the public in August 1993, initial sales were good, but they didn’t hold up. According to Apple, 50,000 units of the PDA were sold in the first three months. However, it is estimated that until its discontinuation barely 200,000 units were solddespite the launch of several versions with optimized software and hardware.

On the other hand, it is worth mentioning that Apple also licensed its operating system to third parties. This allowed similar devices from firms such as Sharp, Siemens and Motorola, among others, to be seen with the same software at the same time.

Despite improvements with each new generation, the Newton MessagePad could never get rid of the bad fame of the original version. Therefore, it is not surprising that Steve Jobs has decided to discharge him on his return to the company. Thus, the PDA followed the same fate as the 20th Anniversary Macintosh and many other products that were canceled by the founder and CEO, in his plan to make Apple profitable again.

The truth is that the case of the Newton MessagePad is quite peculiar. And despite having been a commercial failure, it left its mark on Apple. To the point that its main engineers and executives swore never again be the laughingstock of the press or industry. So made it clear nitin Ganatra, former director of engineering for the Californian firm, speaking about the development of iOS and the iPhone:

“Everyone on the team knew that Apple had tried to launch a touch device with the Newton, and the industry had laughed at them. Scott [Forstall] he was very focused on the fine points around the appearance. When we launched an app, it had to appear instantly. When you moved your thumb up or down, scrolling had to follow your movement without delay.”

As much as Apple may not like it, the Newton MessagePad is part of its history and also deserves to be remembered. At least it serves to reflect an era in which those on the block they were far from becoming what they are todaywhere virtually every product they launch is an instant hit.