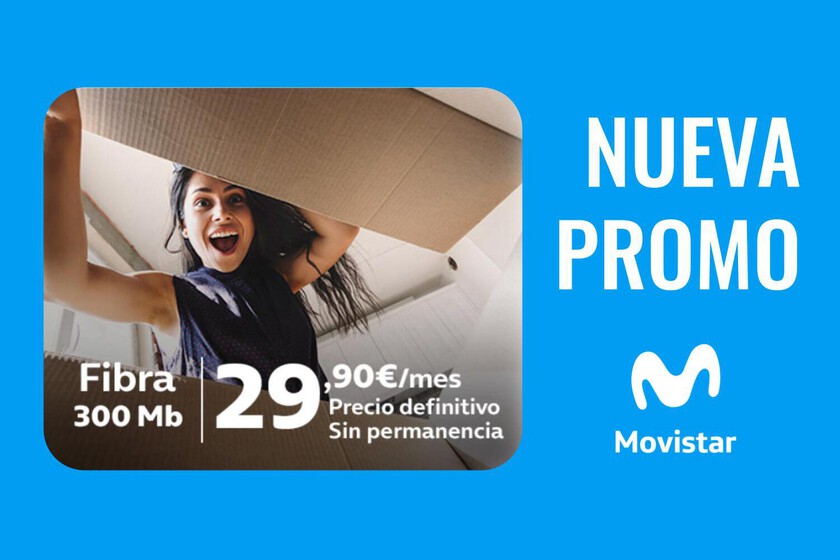 Share
Facebook Twitter LinkedIn Pinterest
For the past two years, a particular war has been reignited around the fiber only deals among the main operators that promote the Internet connection with prices without much competition, although only or sporadically, to boost the acquisition of new customers at specific times.

And with the current turmoil due to price increases, Movistar has considered that it is a good moment to rescue this type of promotions, which this time come with an important novelty to the operator: the discounted price is “final”. It is no longer limited to the first few months, as has been the case with the operator throughout its history.


Fiber and fixed for less than 30 euros

Movistar launches a new fiber rate to 300 Mbps symmetricwhich includes a landline with unlimited calls to national landlines and 50 minutes to mobile. And it does so for a definite price of €29.90 monthly, as long as you are in one of the 696 municipalities considered competitive.

In other words, the new fiber-only rate is 1 euro cheaper and three times faster than the cheapest official rate existing up to now, and it remains contractable for those who live outside the 696 populations indicated by the CNMC. In any case, yeswithout any type of permanence and with the Smart WiFi 5 router included.

With respect to the rest of the market, Movistar equates the price of its fiber to the official one of MásMóvil (but which has been reduced for 12 months to 19.99 euros), and it is the same price for which operators such as Digi, Oléphone or Jazztel offer 1 Gbps. Lowi, Digi, Simyo and, above all, Xenet, continue to have the cheapest 300 Mbps fiber, although none of them includes a landline, as summarized in the comparative graph: