Number 622 of Computer Hoy is already in your kiosk! 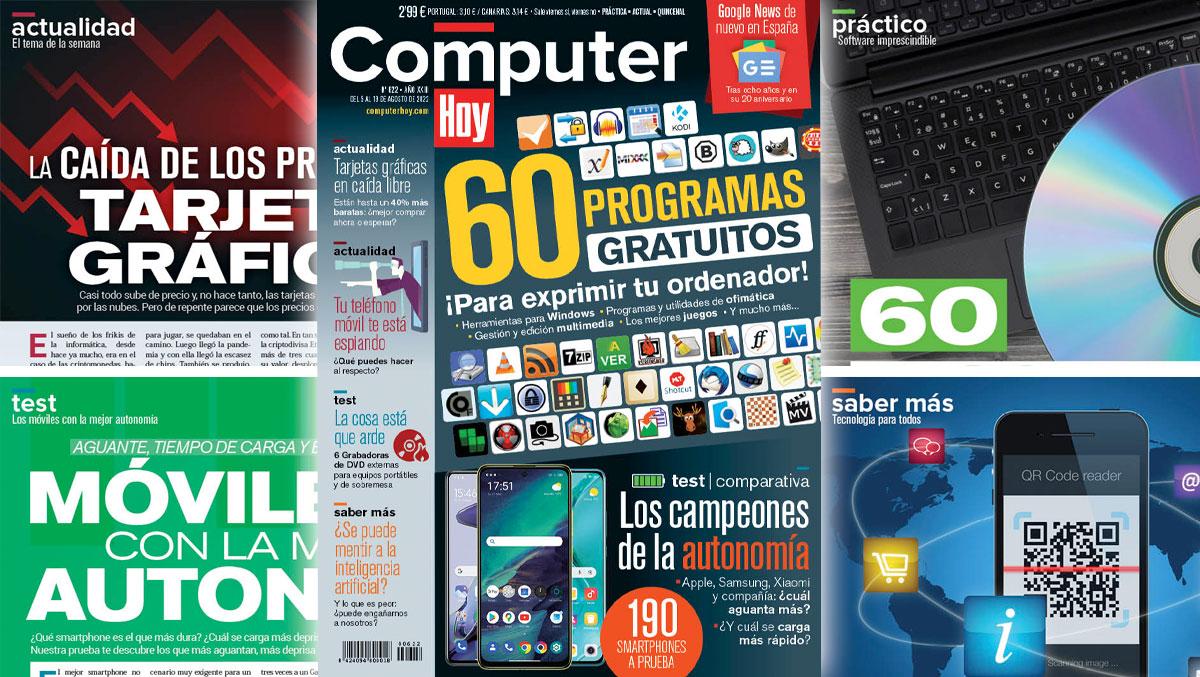 Seven decades of a success story. Year 1952. Axel Springer (then only 39 years old) is aware of users’ fascination with moving images and intends to anticipate them by giving the “printed answer to television”. He has the idea of ​​launching an “unconventional” newspaper that is not composed exclusively of text, like all the others. A newspaper that does not want to be a newspaper, but an illustrated book! Thus was born BILD, the largest newspaper in Europe, with great losses during its first year. “You will become poor,” warned a friend. But he did not give up and what began in a room at the Savoy Hotel in London became the greatest success story in the world of newspapers. The adventure of one of the most important publishers in the world began.

With the same enthusiasm with which Springer created BILD in 1952 and with the idea of ​​making a computer magazine that did not want to be a computer magazine, it was born in 1996 in Hamburg (the group’s original headquarters and 50 years after its foundation in 1946). Computer BILD magazine. Only two years later, in 1998, the Spanish edition was launched under the Computer Hoy brand, the best-selling computer magazine in our country. 24 years later – and 70 since BILD – the Axel Springer SE group, headquartered in Berlin, operates in more than 40 countries and publishes more than 150 publications under media brands (among others BILD or INSIDER) and advertisement portals (eg. StepStone Group).

Get the latest issue of Computer Hoy, the best-selling computer and technology magazine in Spain, without leaving home.

Let’s go back 10 years: 2012. There are many of you who have been wondering for some time when we are going to offer you online content from magazines such as Computer Hoy or Personal Computer & Internet. It is in October when ComputerHoy.com sees the light. As of June 2022, its audience amounts to 8,221,628 users according to Analytics. But something had not changed since 1998: our logo. On the cover of this issue you can see the result (on the web too) of what is to come: more space for photos, more clarity, more Computer Hoy. A work of months that I hope you like. Thank you, we have written this ‘unconventional’ story together.

Contents hide
1 Discover in video the main themes of this issue
2 PRESENT
2.1 The latest in social media: What is being talked about on the Net
2.2 The photo of the week
2.3 Top 5: Important news…
2.4 News: The hobby of the week
2.5 The topic of the week: Google News is available again in Spain
2.6 The topic of the week: The fall in prices of graphics cards
2.7 All about security: Is your smartphone spying on you?
2.8 The gadget of the week: EcoFlow DELTA Max, a dream come true
2.9 News: News
3 PRACTICAL
3.1 Essential Software: 60 Free Programs
3.2 Squeeze Windows 11: Trash that empties automatically
3.3 Best Tricks: 4 Samsung Easy Mode Tips
4 TEST
4.1 Endurance, charging time and efficiency: The mobiles with the best autonomy
4.2 6 External DVD burners: The thing is on fire
4.3 The latest technology
5 KNOW MORE
5.1 Technology for everyone: The curious origin of QR codes
5.2 Technology for everyone: That’s how it is and how Make-A-Scene works
5.3 Technology for all: Can artificial intelligence lie?
5.4 Technology for all: Reinventing the train to make it invincible
5.5 We solve your doubts: Questions & Answers
5.6 in the next number

Discover in video the main themes of this issue

The latest in social media: What is being talked about on the Net

The photo of the week

No humans on board.

…and what they mean to you.

News: The hobby of the week

The topic of the week: Google News is available again in Spain

Google’s news service had to close eight years ago in Spain but, after some recent changes, it is once again available in our country.

The topic of the week: The fall in prices of graphics cards

Almost everything goes up in price and, not so long ago, graphics cards were also through the roof. But suddenly it seems that prices fall. What’s going on?

All about security: Is your smartphone spying on you?

Your mobile phone is listening to you and helping marketing companies target you. What can you do about it? Next, we give you all the keys.

The gadget of the week: EcoFlow DELTA Max, a dream come true

It recharges 80% of its battery in 60 min by AC and in 280 min with solar panels, and offers hours of peace of mind thanks to its 2,016 Wh capacity. There is no portable generator that gives more.

Programs for the online office, photo and video editing tools, games, alternative programs for email management and much more. In this issue, we present a great collection of programs that you should not miss.

On a regular basis, it is common to empty the Windows Recycle Bin in order to recover space. But did you know that you can make the system do it automatically? We explain how.

Endurance, charging time and efficiency: The mobiles with the best autonomy

Which smartphone is the longest? Which one charges faster and which one is the most efficient? Our test reveals the ones that last the longest, charge the fastest and save the most.

6 External DVD burners: The thing is on fire

Many of today’s laptops are light, sleek, and so thin that they no longer have a DVD optical drive. So you need an external model. But which one is the best? Our comparison gives you the answer.

Technology for everyone: The curious origin of QR codes

QR codes have more and more applications. For example, in restaurants it is possible to access the menu from the mobile with a QR reader app. But this function is not new, since these codes are many years old.

Technology for everyone: That’s how it is and how Make-A-Scene works

Facebook, now Meta, already has its own AI image generation engine. It’s called Make-A-Scene and with it he intends to build immersive worlds in the Metaverse and create digital art.

Technology for all: Can artificial intelligence lie?

Today, we are urged to rely more and more on artificial intelligence. But can these types of systems be fooled? Or worse yet, can they fool us?

Technology for all: Reinventing the train to make it invincible

Innovative countries such as the United Kingdom, Spain and the United Arab Emirates have opted to automate their trains. Part of the technological developments are created by the Thales Spain company.

We solve your doubts: Questions & Answers

There are many questions about technical issues that you send us. In this section we answer all your questions.

in the next number

How ransomware gets from one computer to another