Oh amazing! Your smartphone and laptop will be charged by sunlight, this ‘jugadu’ device created panic 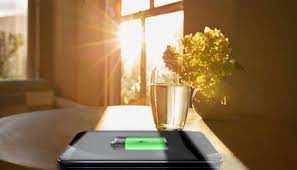 Share
Facebook Twitter LinkedIn Pinterest
Tech News Desk – Smartphones and laptops have become an important part of our lives. Nowadays all the work is done with mobile-laptop. It requires electricity to charge. If it gets stuck in a place where there is no electricity, then the battery of the phone and laptop runs out. But now such a device has come, which is charged by sunlight and can charge the phone and laptop many times. Yes, we are talking about Solar Power Bank. A company named Dexpol has started a Kickstarter campaign for a solar power bank. It has 65W USB-C charging support. This is a solar battery, which will fully charge your device with sunlight. Deexpole Solar Power Bank gets 24,000mAh battery and three inputs are available. It is a foldable device with 24 percent conversion rate. With the help of its solar plate, the device will be fully charged in 5 hours. The Dexpole Solar Power Bank sports a sporty design.

Four solar panels are available in the Dexpole Solar Power Bank. It also has the facility of wall socket, through which you can fully charge the device in about 2 hours. An LED display is available in the device, which shows the charging percentage. According to the company, this power bank can charge the iPhone 14 Pro Max four times and the iPad Pro twice. There are also two USB-A ports available along with a 65W USB-C port. Two USB-A ports can output 24W power. It is also very light, weighing 1.2KG and the device is water resistant. Under the Kickstarter campaign, 41 percent discount is being given on Dexpole Solar Power Bank. Its price is around $ 146 (Rs 11,871). Dexpole says that the power bank is compatible with all USB devices and can be used both indoors and outdoors. The device comes with one year warranty along with lifetime customer support.

The Dramatic Ways That Technology Has Changed Editing