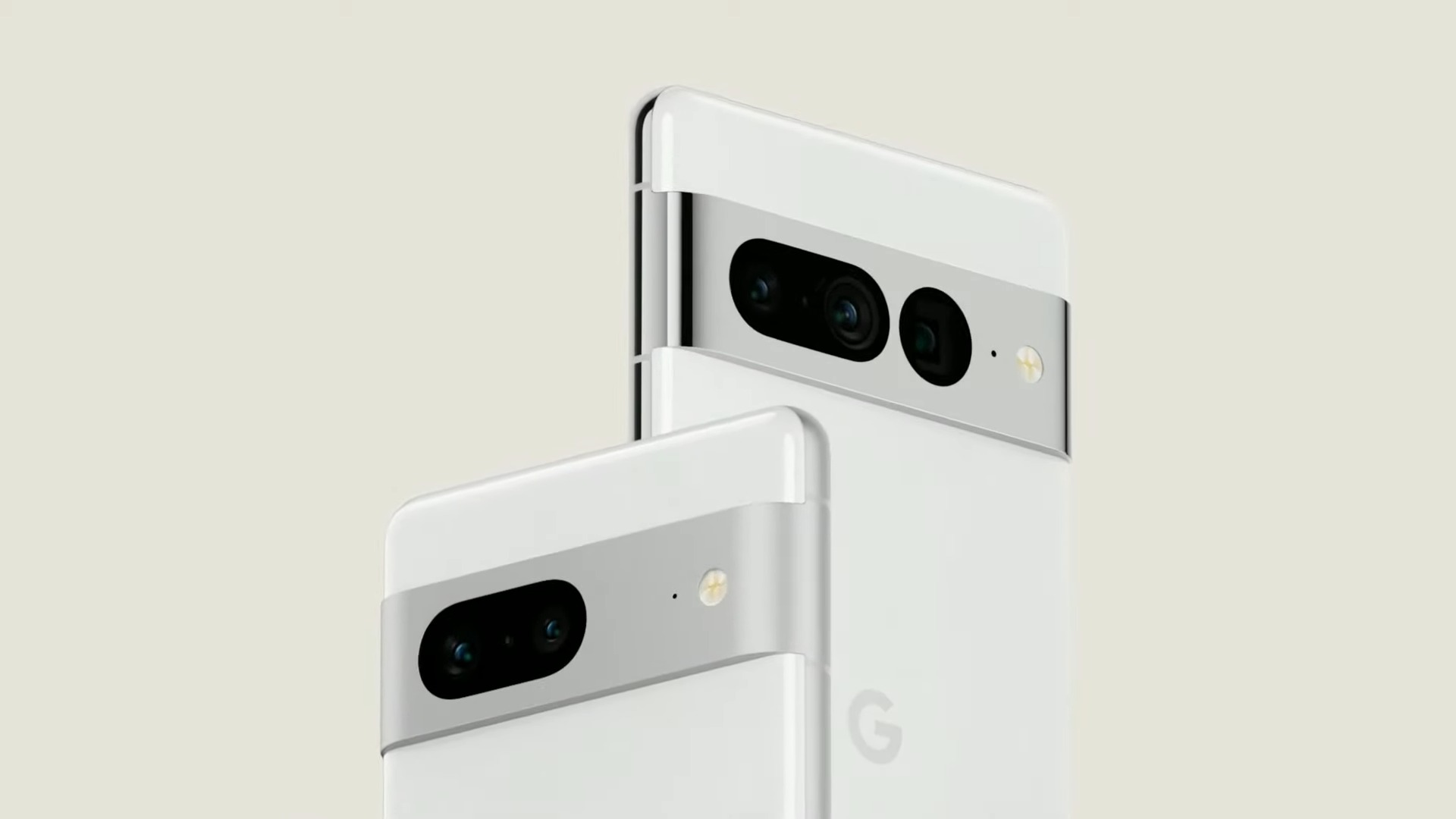 Google has announced the arrival of its Pixel 7 and 7 Pro, but the Mountain View company has not yet said everything. Release date, photo module, design, screen… We take stock.

After a very successful Pixel 6 in which the public seems to find themselves (Google claims that it sold better on its own than the Pixel 4 and 5 combined), the Mountain View company has finally formalized the arrival at the next fall of the Pixel 7 and Pixel 7 Pro.

Only, the giant has not said everything. So let’s summarize here the absolutely certain elements on these flagships, since they are put forward by Google, then let’s also look at the rumors that we deem reliable on the points not addressed during their teasing.

Contents hide
1 The aluminum that changes everything
1.1 Three colors for each model
2 Tensor 2 is confirmed
3 In the photo, why change a winning team
4 To a smaller screen
5 The gray areas
6 Release date and price

The aluminum that changes everything

When a launch is successful, moving on to the next one can sometimes be a complicated decision. Should we decide with the precedent or continue on its momentum? Google, for its part, has decided to keep the fundamentals of the Pixel 6, but by putting a little more resources into it.

By this we mean that the photo block, an element that is so visible on the back of the smartphone, will here be made of a 100% recycled aluminum piece. What immediately give a more premium look to its phones.

Especially since owners of Pixel 6 and 6 Pro complain precisely that their photo block is the first part of the smartphone to suffer wear. With a harder material, we can expect greater durability.

On the other hand, according to the Youtuber Brownlee Brands (aka MKBHD), Google would keep the same type of glossy glass, again passing on the idea of ​​a matte coating.

For the rest of the design, the two phones seem very close to their elders, except that the two wide-angle and ultra-wide-angle sensors will now be surrounded by an oblong bubble, while the third on the Pro, probably a telephoto lens, is isolated in its own punch.

One thing is certain, having shown the design so early should put an end to the rumors about it. However, the front face was not shown during the presentation. Does this mean that Google has still kept a revelation under the hat? We think for example of a front photo sensor hidden under the screen. For the moment, there is nothing to confirm it except perhaps a patent in August 2021.

Especially since a user has published photos of what he claims to be a prototype of Pixel 7 in order to sell it on eBay. This supposed Pixel 7 does indeed have a central punch.

As at Google, product leaks are a real tradition (see the Pixel Watch found in a restaurant), you will not be surprised to learn that another Internet user claims to have used the Pixel 7 Pro for several weeks. The poor guy naively thought he had acquired a Pixel 6 Pro. In response: Google formatted the phone and rendered it inoperative, thereby confirming that it was probably the famous model.

Three colors for each model

Another oh so important point, the first colors (we imagine that others may be revealed later) were shown just after the conference. 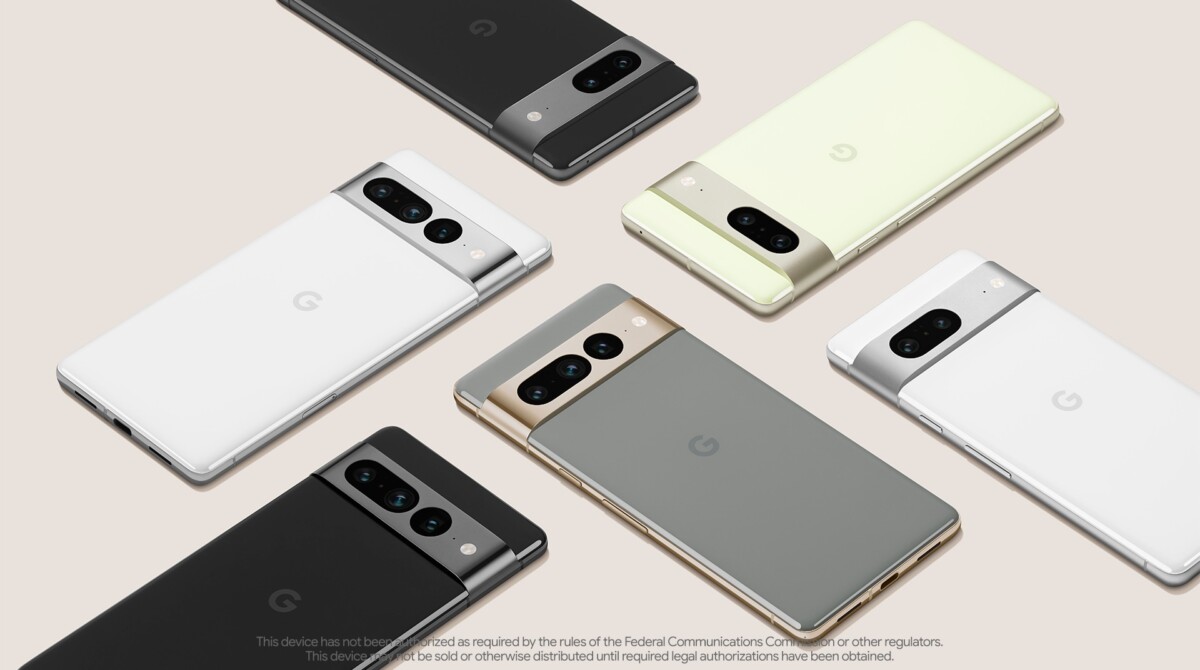 For the Pixel 7, you can choose between a black, a white and a lemon yellow, while the Pixel 7 Pro comes in black, white and gray green.

In addition, we notice that the back of the phones is completely plain this time. On the Pixel 6, we could detail two colors, one above the block, and another below.

The Pixel 7 range should be based on Android 13. Google is also working to avoid the avalanche of bugs that hit the Pixel 6 when it was released.

Second element confirmed by Google, the second generation of its in-house SoC, the Google Tensor 2, will equip these Google Pixel 7 and 7 Pro well. The chip would be manufactured by Samsung in 4nm.

Very good news since it is partly this chip that made the appeal of previous models, allowing management of algorithms dedicated to artificial intelligence, photo and video at the top. We hope, however, that Google will have been keen to make its chip more powerful, since the first Tensor clearly had a train of delay, especially on the graphics part.

In the photo, why change a winning team

Google did not deign to give details on the photo components of the Pixel 7 and Pixel 7 Pro. According to the leaker Yogesh Brar, the photo modules will be exactly the same as on the Pixel 6 and 6 Pro. A second leak in July 2022 corroborates this initial information.

This would not be very surprising on the part of the Mountain View company, which had kept the same sensors from Pixel 2 to Pixel 5, with a very convincing optimization perspective.

To a smaller screen

Another point ignored during the Google I / O, the Pixel 7 would go from a 6.4 inch screen to 6.3 inches. A small change that can make a big difference in handling and that does not seem totally illogical given the premium smartphone market. Indeed, the Xiaomi 12 and Galaxy S22, for example, have both tended to shrink in size this year.

The Pixel 7 Pro for its part would retain its large diagonal of 6.7 inches, again a logical choice for the brand’s most equipped smartphone.

In addition, we learned shortly after the presentation of the phones that they would retain the definitions and refresh rates of the Pixel 6 and 6 Pro, namely:

As you will have understood, despite the partial formalization of the Pixel 7 by Google, there are therefore still a large number of gray areas on this phone. For example, we do not know the phone’s charging power, even if we hope that the latter will exceed the 30 W of the Pixel 6, which is much too slow in 2022.

Google announced that the Pixel 7 and 7 Pro would be released in the fall of 2022. For comparison, the Pixel 6 and 6 Pro were announced on October 19, 2021 for availability on October 25. According to FrontPageTechthe date would be slightly advanced with pre-orders from October 6 and an official release on the 13th.

Prices are currently unknown. The Pixel 6 were released at a very aggressive price compared to the competition. To see if Google maintains the same strategy or not.