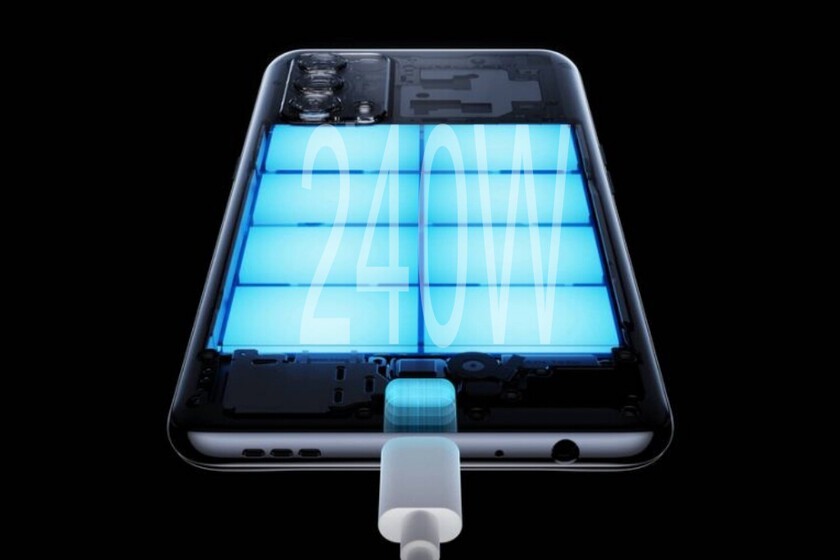 Share
Facebook Twitter LinkedIn Pinterest
A few months ago we knew the Realme GT Neo 3which came with a standard version with fast charging at 80 W and another that, at that time, marked the highest charging power in a smartphone with up to 150 W. Well, it seems that Realme wants to reign in this section again with his next upper-middle-range smartphone.

And it is that a leaker affirms that the Realme GT Neo 5 They are already preparing to incorporate a fast charge that would not only improve the 150 W of the previous generation, but also the record of 210 W currently held by the Xiaomi Redmi Note 12 Explorer. And that figure was already very high.

It has been standardized for a long time. fast charging on smartphones. As always, some with more and others with less. The fact is that being able to charge the mobile from 0 to 100 in a few minutes is an option for which there is an increasing commitment. The record currently stands at 9 minutes.which is how long the aforementioned Redmi Note 12 Explorer takes.

Realme will skip the ‘4’ in its Realme GT Neo series as is customary because that is the unlucky number in China, which would bring us a Realme GT Neo 5 that, according to the leaker DCS (Digital ChatStation) would have two versions: Being a leak, there is no concrete data about how long it would take to fully charge. However, and in view of what we have already verified, It would not be unusual for it to take around 5-7 minutes to complete a charge. According to our tests, the Realme GT Neo 3 with 150 W fully charges in 16 minutes, and it is noteworthy that it already has half its battery recharged in just 5 minutes, while Xiaomi claims that its Redmi Note 12 Extreme recharges in just 9 minutes.

A not insignificant fact is that, once again, a debate will be reopened that confronts capacity and fast charging by observing that the 150 W version is the one with the greatest capacity. Although it is not that we can say that 4,600 mAh is a small battery for that model with 240 W fast charging.

Other information about the Realme GT Neo 5 that reveals the same leaker is that it will have a main camera with a Sony IMX890 lens, with optical image stabilizer. It also reveals a possible 16 or 32 megapixel selfie camera. To this we would add other specifications leaked to date such as a 6.5-inch AMOLED panel at 120n Hz and with FullHD + resolution, as well as a 9-series Dimensity chip.

On possible filing dateWe don’t know anything at the moment. The previous generation was presented in China in March and ended up arriving in Spain in June. Having such early leaks about the new generation makes us anticipate that it can be anticipated, but there is nothing official from the manufacturer. That it will be already in 2023 does seem obvious.

Banking has changed a lot in recent years