Share
Facebook Twitter LinkedIn Pinterest
WhatsApp is premiere. After a long wait, just yesterday Mark Zuckerberg kicked off reactions to messages, although this is not the only promised function that begins to be activated for users: so do users. shipments of up to 2 GB and groups of 512 people.

In a blog post, WhatsApp has announced sending 2 GB for all, while in WaBetaInfo we can see that the maximum number of participants in a group doubles to 512 people. Of course, both changes -along with the reactions- are still in the deployment phase, so they may not yet appear on your mobile.

A few weeks ago WhatsApp officially announced three improvements that were to arrive “from that very day”: reactions, communities and sending files up to 2 GB in size. Yesterday the company announced exactly the same thing again, reiterating that the news, now yes, were being activated for all usersAt least two of them, or three, depending on how you look at it.

Curiously, the reactions sometimes appear in the web version but not in the app, for the same account.

WhatsApp already counts reactions as active for all users, although we have been able to verify that the deployment is as slow as usual, and we will probably have to wait a few days or weeks before its use normalizes. WhatsApp also assumes that all users can already send files up to 2 GBalthough in our tests we have been able to verify that, again, the deployment does not yet seem to be generalized.

Where it seems that WhatsApp has been caught by the bull is with the communities. While the communities – and their tab, which will replace the camera tab – as the WhatsApp blog post explains that they are still working on its launch. As an advance, the maximum number of users in a group is increasing up to 512 peopleas we can see in this screenshot of WaBetaInfo. 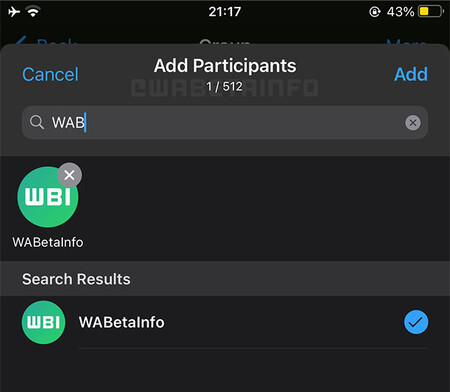 Again this is a server-side deployment, and a slow one, so chances are if you try to add more than 256 people (the old limit) to a group, you still won’t be able to. You can easily see the current limit on WhatsApp for iOS, but not on WhatsApp for Android.

Many news on WhatsApp, although we continue to depend that the server activates the functionAnd with over 2 billion users, this can take time. At the moment, the only thing you can do to “speed up” the process is to keep your WhatsApp updated to the latest version.