so you can open it and navigate with it (and no, we’re not talking about Edge’s ‘IE Mode’) 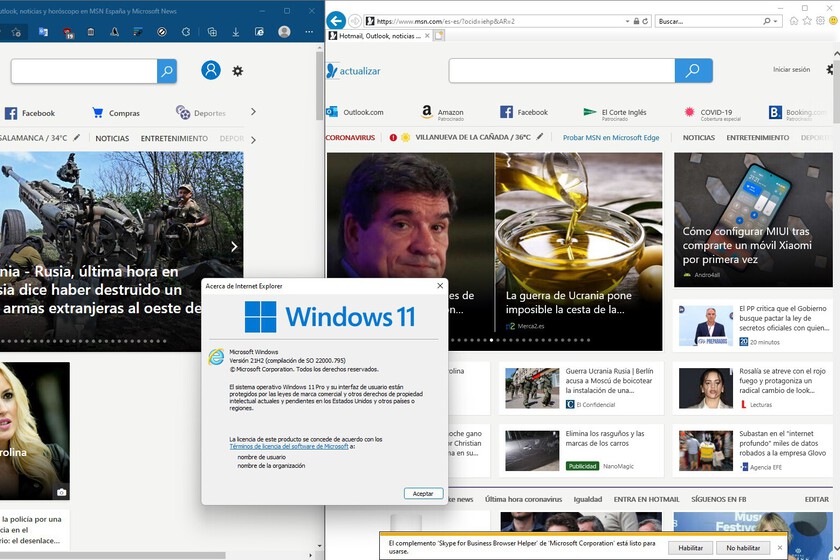 Official support for Internet Explorer —the historical program that only a few years ago monopolized the navigation of the WWW— ended on June 15, as Microsoft had already announced for a long time, although its total disappearance from Windows 10 will be slow, and it is still waiting for a update.

However, that is not a problem for users of Windows 11, an operating system that never included Internet Explorercounting from the start on its successor Microsoft Edge: IE is, officially speaking, 100% absent in Windows 11. Or is it?

No emulators, we are talking about the genuine IE

“I know what you’re going to say”, you must be thinking, “you’re going to remind us that actually Edge has ‘Internet Explorer Mode’ that allows you to open tabs while preserving compatibility with websites adapted to that browser”. Well, yes, for that reason alone it could be said that, in a way, IE still remains in Windows 11…

…but not, the news is that the real and genuine Internet Explorer can still run on Windows 11 outside of MS Edge. And yes, it comes standard with the operating system, no need to install any software extra.

If your first reaction was to type ‘iexplore‘ in the Run window—a method that would have worked on any pre-eleventh edition Windows— You must have been disappointed, no doubt: all it does is open an MSN.com tab in Edge (and it doesn’t even do it in ‘compatibility mode’). A scam, come on. So how can we open IE in Windows 11?

The solution is a little less obvious and more intricate, of course: Microsoft has covered its tracks well. But By following these steps, you will be able to open your Internet Explorer window in a few clicks: Thus, if Edge’s ‘compatible mode’ isn’t enough to make a website of our leading Public Administration work, or if you simply you miss the ‘retro’ experience to use the historical default web browser of most versions of Windows, this trick will be very useful.

How S works, the ultra-secure mode of Windows 11 to turn your PC into a safe

The series that the world is talking about is coming to Netflix in September!