the Argentine fighter that wants to recover its shine 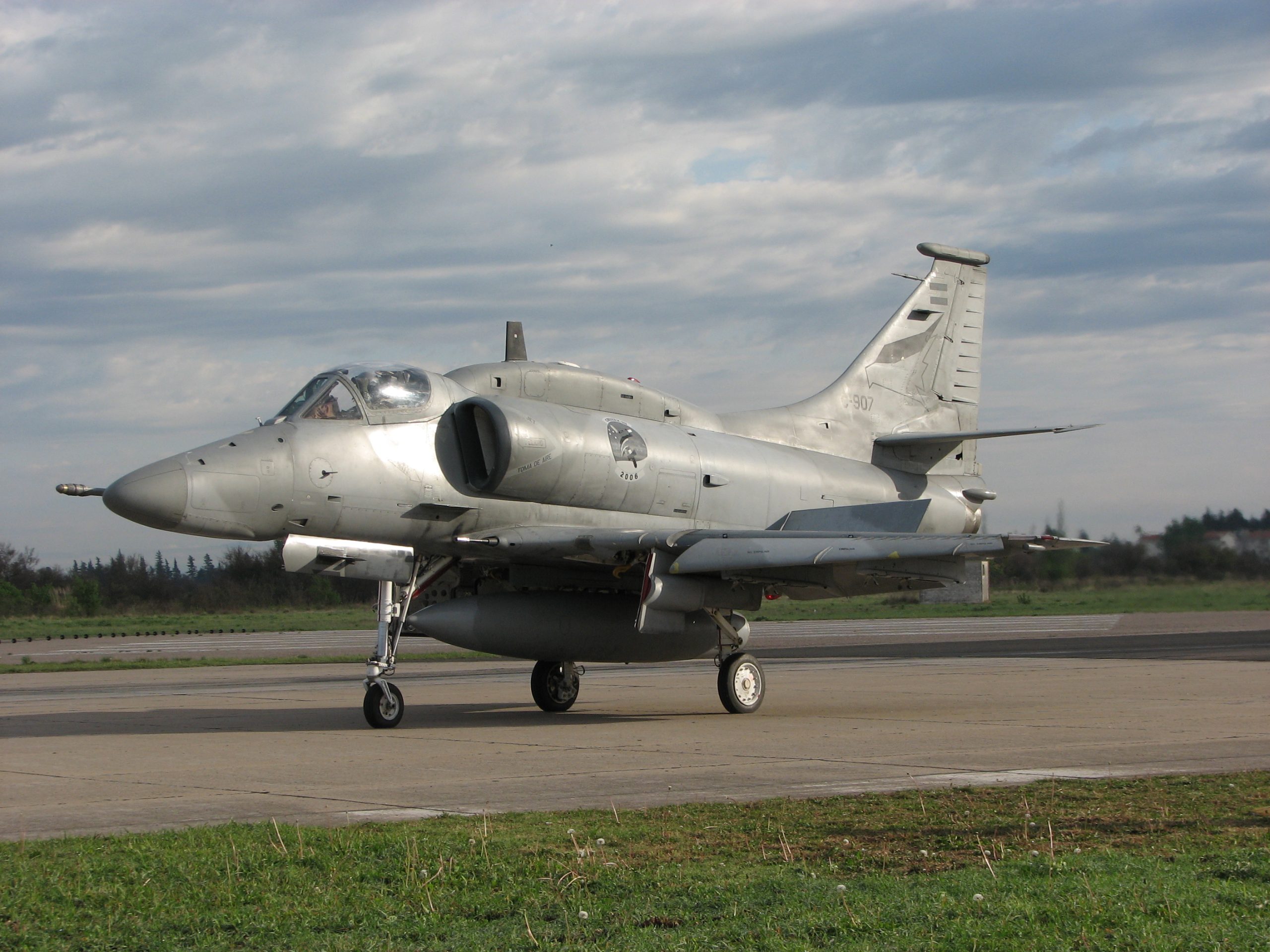 After the Falklands War, the Argentine Air Force moved forward with an upgrade program for its main combat aircraft. This allowed the Mirage weapon system, made up of Israeli Mirage IIIs and IAI Daggers (later upgraded to the Finger program), to fly until 2015. However, in the 1990s the Argentine government and the FAA undertook an ambitious project to incorporate a modern fighter-bomber that led to the development of the A-4AR Fightinghawk.

We are talking about a truly unique piece of engineering, and for different reasons. In the first place, because it involved merging the characteristics of different existing aircraft into one. But also because it was the last great project of the international arms industry designed specifically for the Argentine Air Force.

The A-4AR Fightinghawk has become a cult object among fighter aircraft enthusiasts. Today it is the spearhead of the Argentine military aviation, but unfortunately in recent years the number of operational units has fallen drastically.

Of the more than 30 that were available in the late 1990s, only six are still active. And while hard work is being done to recover many of those who are out of service, Argentina’s complex economic situation makes the process slower and more difficult.

Contents hide
1 A-4AR Fightinghawk, much more than the modernization of an old acquaintance
1.1 Single and two-seater models
1.2 Main features
1.3 St. Louis, the home of the A-4AR Fightinghawk
1.4 Problems
1.5 recovery efforts

A-4AR Fightinghawk, much more than the modernization of an old acquaintance

As you may have noticed from the name of the aircraft and its design, the A-4AR Fightinghawk has its origins in the Douglas A-4 which entered service in 1956. However, it is not just a modernized variant like so many others that have been launched since its introduction.

We are talking about a development that merged many of the good features of the A-4, an aircraft widely used by both the Air Force and the Argentine Navy, with the modern instrumentation of the F-16.

In fact, that the A-4AR bears the name Fightinghawk is not on a whim. In recognition of their “hybrid” nature, it was decided to merge the distinctive Fighting Falcon and Skyhawk designations of the F-16 and Douglas A-4, respectively.

However, the original idea of ​​the Argentine Air Force to modernize its fighter fleet in the 1990s was different. With the implementation of the Convertibility Law that established that 1 Argentine peso was equivalent to 1 dollar, added to the foreign policy of the government of then President Carlos Menem, which proposed a clear rapprochement with the United States, the initial plans were somewhat more grandiose. .

According to records from 1991 and 1992, the initial intention was to add units of the F-16 Fighting Falcon, the F-15 Eagle or even the F-18 Hornet. However, none of this happened.

The plan quickly mutated into the acquisition of a batch of A-4M Skyhawk He belonged to the United States Marine Corps. They would be handed over to Lockheed Corporation—later Lockheed Martin—for major rebuilding and modernization, using the F-16’s avionics. Let’s not forget that this company had acquired the aircraft manufacturing business of General Dynamics, so it had been left in charge of the production of that fighter.

The original cost of the program, in 1994, was estimated at 365 million pesos/dollars and encompassed the production of 36 A-4AR Fightinghawks. However, this figure was later cut due to economic problems caused by the “Tequila Effect”. This forced to dispense with some characteristics of the final equipment of the fighter-bombers, among other issues.

In principle, 18 units would be produced in the United States and as many in Argentina, although finally the North American versions were less. As part of the agreement, it was agreed to the privatization of the Military Aircraft Factory located in Córdobawhich passed into the hands of Lockheed Martin in mid-1995.

Although all units of the fighter-bomber produced for the Argentine Air Force are commonly referred to as the A-4AR Fightinghawk, there are actually two versions: a single-seater and a two-seater. Of the first 32 were manufactured, while the remaining four correspond to the second variant. The latter bears the formal name of OA-4ARbecause its development follows from the Douglas OA-4M Skyhawk.

The delivery process of the A-4AR Fightinghawk began in 1997 and ended in early 2000. Since then, all units of the fighter-bomber have been operated by the Argentine Air Force Fighter Group 5. As it works in the V Air Brigade of Villa Mercedes, in San Luis, this has earned it the nickname “Cradle of Falcons”.

All photos courtesy of Martín Otero.

Unfortunately, despite the fact that they have only been in service for 25 years, their operational capacity has been drastically reduced over time. Four units were completely destroyed in separate incidents — two in 2005, one in 2013 and one in 2020 — while another was damaged when it hit a hangar at its base in 2015.

Argentina’s recurrent economic problems have also taken a toll on the maintenance of the A-4AR Fightinghawks, which were temporarily inoperative in early 2016. The then Minister of Defense, Julio Martínez, confirmed that the aircraft could not fly due to corrosion problems and lack of vital spare partssuch as cartridges for ejection seats, among others.

It was even known that the intention was to deprogram them in 2018, which ultimately did not happen. At present, only six units are active, although a very promising A-4AR Fightinghawk weapon system recovery process has begun, with the appearance of possible new suppliers and the addition of more of its own capabilities.

Although the coronavirus pandemic and the devaluation of the peso have taken their toll, the Río Cuarto Material Area, in Córdoba, is currently working to put a seventh unit in operating condition. However, the plans are much more ambitious. The Argentine Air Force wants to return to having about 12 units in operation in the medium termto later recover six more and reach a fleet of 18 fighter-bombers.

Despite its operational and budgetary limitations, the A-4AR Fightinghawk is the only “powerful” combat aircraft possessed by the Argentine armed forces. It is true that the Air Force has incorporated units of the IA-63 Pampa IIIproduced in FAdeA —name received by the aircraft factory in Córdoba after being nationalized again at the end of 2009—, but it is an advanced training aircraft with light attack capabilities.

While the Argentine Navy is waiting to be able to fly the Super Étendard Modernise acquired in 2019. They have not yet been able to take off due to the UK veto on the provision of pyrotechnic cartridges for ejection seats.

Will the A-4AR be able to regain its glory? Today Argentina does not have many alternatives. In recent months, representatives of the Air Force have been in China evaluating the JF-17 Thunder fighter as a possibility to incorporate. However, the possible interest in acquiring said aircraft would be more to regain supersonic capability lost with the loss of the Mirage weapon system, than in getting a direct replacement for the Fightinghawk.

All ways to recover deleted messages on WhatsApp

After presenting its new ship of folding smartphones and its new generation of smartwatches, Samsung…

3 mechanical keyboards with Ñ that you can buy

The mechanical keyboards They became very fashionable among video game players. They offer a much…