The Google Pixels receive their largest ‘Feature Drop’ update to date: these are the news 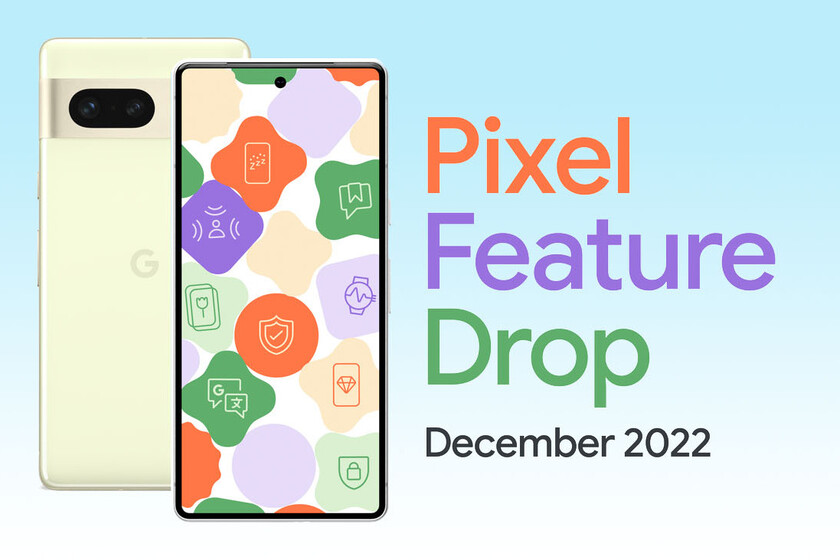 Share
Facebook Twitter LinkedIn Pinterest
After announcing a few days ago the news from Google that will reach all Android devices during the Pixel Christmas season, now the manufacturer launches the New features coming exclusively to the Pixel family.

Google Pixel devices, in addition to being the first devices to update to the new versions of Android and to receive security patches, also receive an update every quarter ‘Pixel Feature Drop’ which adds more exclusive features to its family of devices currently consisting of mobiles, a watch and headphones.

Contents hide
1 These are the news of the December Pixel Feature Drop
1.1 Browse safely with Google One VPN
1.2 New ‘Security and privacy’ settings
1.3 sharper calls
1.4 Google Recorder will now know who said what
1.5 More information about your dream
1.6 More wallpapers for the Pixel
1.7 More features

These are the news of the December Pixel Feature Drop

As reported by Google, this ‘Pixel Feature Drop’ update is the biggest to date, and the first for google pixel watch, receiving the family of Pixel devices news focused on making our lives even easier. Updates come from pixel 4a until the last pixel 7 Y 7Pro next to PixelWatch today. Here we review all its news:

Browse safely with Google One VPN

Starting today, all users of a Pixel 7 or Pixel 7 Pro can now activate the Google One VPN for free to enjoy safe Google browsing at no cost. The IP and browsing data will be protected to reduce the chances of being tracked and protect us from hackers if we browse on unsecured public Wi-Fi networks.

After months of waiting, the new unified configuration of ‘Security and privacy’ It finally arrives at the Google Pixel. In this new section we will be able to review our security and privacy settings, see the risk levels of our accounts and passwords along with other information that facilitates the protection of our mobile.

The Pixel 7 and Pixel 7 Pro thanks to their Tensor G2 processor are now capable of offering clearer calls. Thanks to the new function crystal clear calls you can eliminate the background noise of your calls to hear the other person much clearer.

Google Recorder will now know who said what

The google recorder now he is much smarter. Starting with Pixel 6, and in English, the application will be able to identify and label each participant in the recording, allowing you to later edit the names of the labels to know who is speaking at each moment of the transcription.

More information about your dream As Google announced a few weeks ago, the sleep profile of Fitbit Premium comes now the PixelWatch so that its users have more information about their sleep style, in addition to obtaining tips to rest better. The feature takes into account 10 different aspects of sleep, including duration, bedtime consistency, and disruption, to represent your patterns with one of six sleeping animals. This data will appear if the watch is worn to sleep for at least 14 nights each month.

More wallpapers for the Pixel to celebrate the International Day of Persons with Disabilitiesartist, poet, podcaster and author morgan harper nichols bring to the Google Pixel three new wallpapers inspired by real life interactions and stories. Google also launches a new collection of live bloom wallpapers to give life to the screen of the Pixels with images that move while scrolling through the home screen.