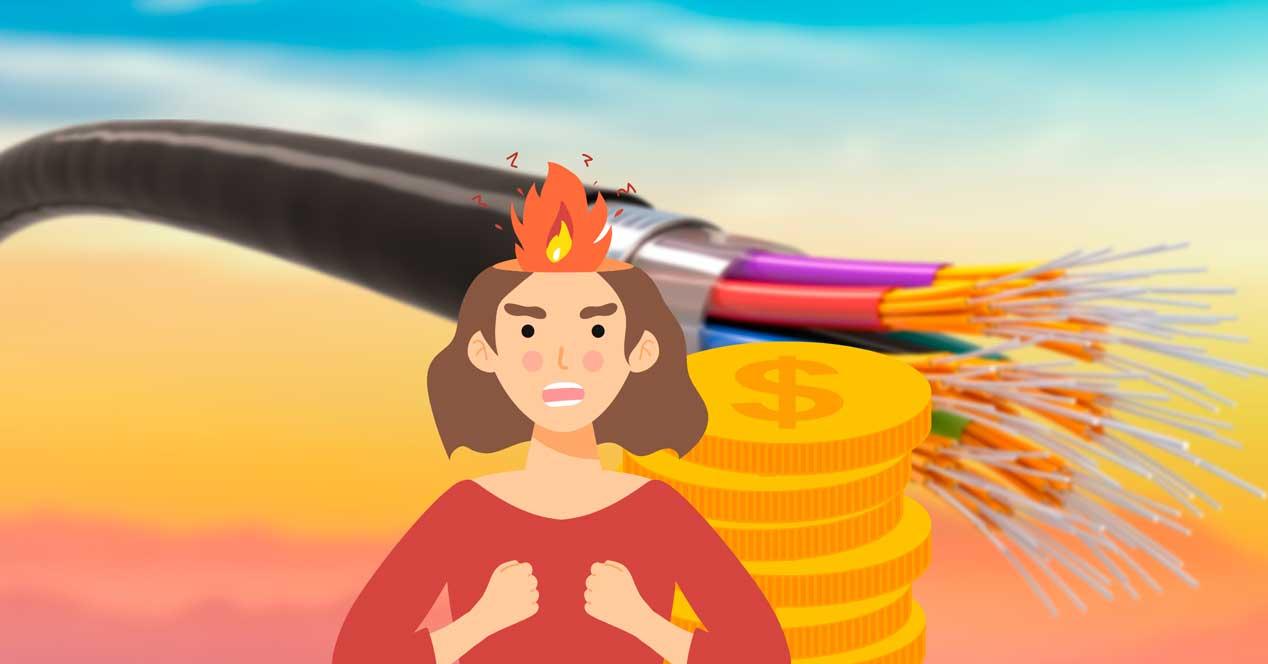 But, What happens if we don’t have Internet for several days? We can and must consult the legal conditions of each operator to find out if we are entitled to some type of compensation for damage or compensation in the event that the Internet does not work. This will depend on our operator and will depend on the type of failure that exists or why our line does not work for us and for how long it has not worked for us.

What can we claim? Generally we can claim if the interruption of the service is greater than a specific number of hours or if it occurs in a specific period of time (for example, during the day and not at night) but we must consult the specific legal conditions of our operator to know what we are entitled to, how we can claim or what money we can request if the Internet does not work.

Contents hide
1 What to consider
2 How much are they going to pay us?
3 Do I have to pay in case of breakdown?

Though it depends exactly on each operator and its legal conditions, there is a series of aspects that are always repeated in almost all companies: we can request compensation after six (eight, in some cases) hours of service interruption in the mobile line from 8:00 a.m. to 10:00 p.m. or we can do it if the fault has not been fixed within 48 calendar hours after you have notified that there is a fault and that the Internet does not work at home. That is, you do not have fiber or ADSL.

Generally, technicians have a fixed period of 48 hours to solve an incident and it is from this period of time when the period in which you can request compensation begins to count. You can go up to two days without Internet and you will not be entitled to compensation or to be paid. In other words, what do we have to take into account if the Internet does not work at home and we want to be compensated for it? The first, You must claim the incident as soon as it is detected because it will be the moment in which this term established in the legal conditions begins to count. Second, we must comply with the times and deadlines indicated by the operator. And, third, you must request compensation: they will not give it to you if you do not claim it.

How much are they going to pay us?

The amount they are going to pay us for the interruption of the service It also depends on the operator and we can find the amount or percentage in the different legal conditions. For example, Orange indicates that for fixed services the discount will be the “discount equivalent to the proportional part of the monthly fee corresponding to the fixed service during the days that the client is without service after 48 hours without service”.

Movistar it is also included in point 6.1.2 of the general conditions of its legal conditions: “will proceed to return to the client the amount corresponding to the proportional part of the service subscription fee during the time that the service is unavailable”

Vodafone it also tells us how much he will pay us… Due to the interruption of fixed Internet It will be an amount equivalent to the 10% monthly fee that we pay for the rate. The same in the case of the interruption of the fixed telephone. And in the case of Internet access from the mobile phone after eight hours, Vodafone states that it will return an “amount equivalent to the monthly fee for the service affected by the interruption, prorated for the time that the commitment has exceeded”

Do I have to pay in case of breakdown?

There is one last factor that we must take into account: the operators will not pay us if the Internet does not work due to our fault. Orange explains this in its legal conditions: “in the event of Service interruptions for reasons not attributable to Orange and attributable to the Customer, the latter will be exempt from any liability of any kind that may arise in this regard. There will be no compensation whatsoever for the interruption of the Service due to breach of the Contract by the Client”. Of course, they will not pay you compensation if you have removed a cable and that is why the Internet does not work, if you have turned off the router or if you have ripped out the fiber cable.

Can the opposite be the case? Can the operator charge us in case of a breakdown in the Internet or if the connection does not work for some reason and we have made the technician come home to fix something that we have broken? It is unlikely but it can happen and it will depend on where the fault is or the reason why you called the technician. There are cases where yes the fault will be considered billable but there are usually few occasions in which this happens. It will depend on the technician, who will be the one to check the box so that the operator charges the customer in the event that the error is “his fault”. And it will depend on the company in charge or the operator, since not all of them have that box where it is explained that it was the fault of the client.

In other words, if the Internet doesn’t work because you hit the router with a hammer or because you didn’t have it turned on and that’s why it didn’t work, the technician can notify your company so that they charge for the trip and for the effort of having gone to the home to solve a problem that you have caused. But this will depend on the operator you have contracted (some will never charge you even if it is your fault) and, generally, we will not have to pay anything and it is unusual for these breakdowns to be considered “billable”

Pros and Cons of Bundling Internet and Streaming Services

This plan of BSNL will make everyone a holiday, ‘Danadan’ internet for a year at half the price, data will be available even after the pack is over