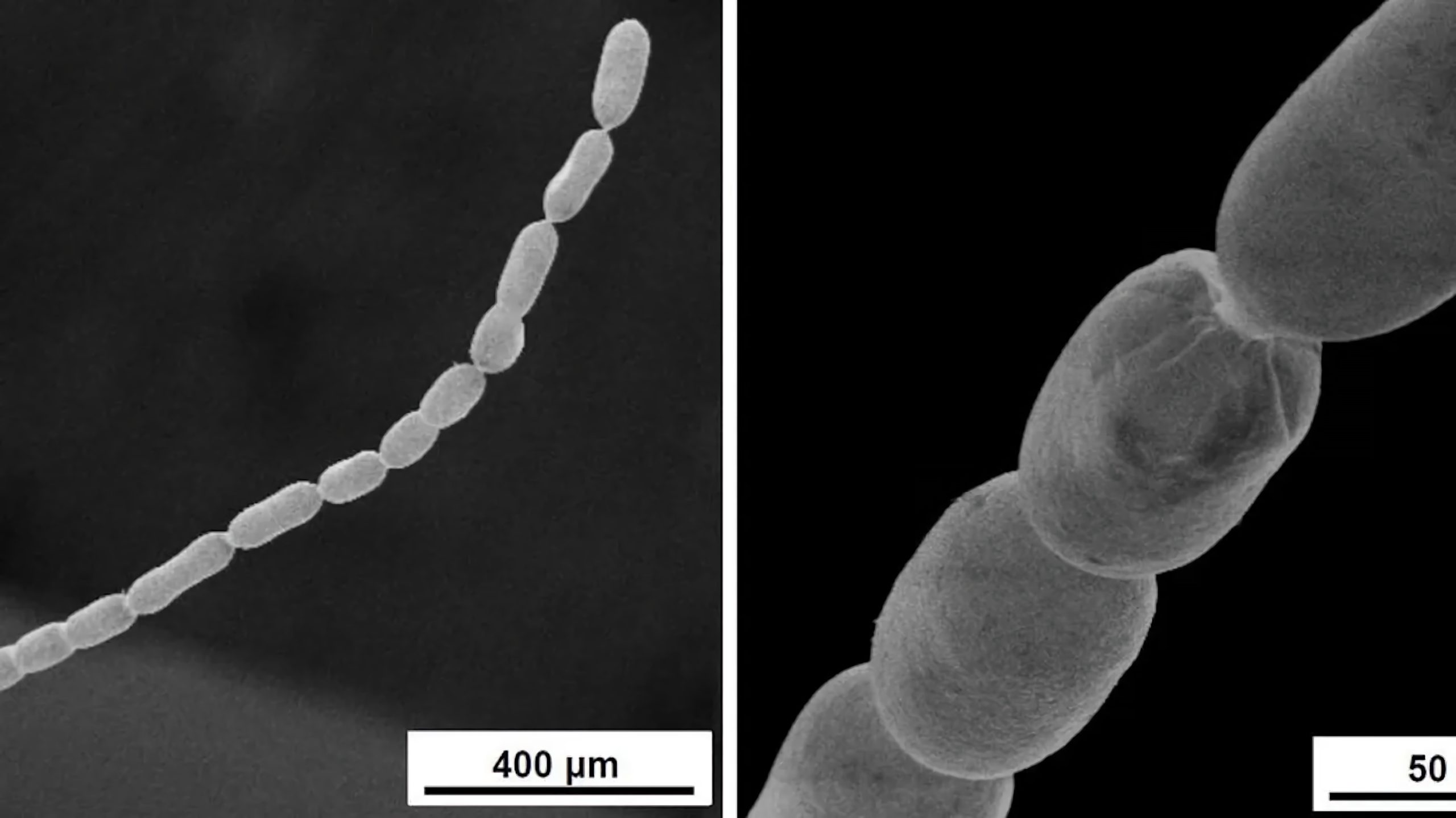 The bacteria They are usually defined as unicellular and microscopic organisms, with their genetic material free in the cytoplasm, without any compartment that encloses it. However, a team of scientists from the University of the French Antilles has discovered a new bacterium that contradicts two of those conditions. On the one hand, because their DNA is encapsulated within membranous structures. And, on the other, because it is so large that it can be seen with the naked eye.

The bacterium in question, named Magnificent Thiomargaritewas discovered five years ago in the mangroves of the Caribbean archipelago of Guadeloupe. However, it was initially thought that it was mushrooms. It took a graduate student named Jean-Marie Volland began to investigate the samples to finally discover that it was a bacterium.

Thus, the line that separates the eukaryotic cellsamong which are ours, of the prokaryotesrepresented mainly by bacteria, remained much more blurred. And it is that in biology the classifications are very useful, but they should not be considered as something definitive, since they can vary as the scientific knowledge. This is a great example of it.

This is the largest bacteria in the world

When the scientists of the University of the French Antilles found the largest bacterium in the world, it was found forming filamentous structures attached to the leaves of the mangroves.

It was found that each individual cell could reach measure a centimeter, so it looked fine to the naked eye. This, of course, led them to think that it was not a bacterium. They settled on a fungus, but really lost all interest and the samples were all but abandoned until Volland took an interest in them.

Then he discovered that it met most of the requirements to be considered a bacterium. In fact, it had quite a few points in common with what was then considered the largest bacterium in the world: Thiomargarita namibiensis. Both are sulfur oxidizing bacteriawith a filamentous structure and a much larger size than usual in this type of organism. But the one they were studying was much bigger, so he went on to unseat her from her position and, as such, took the surname of magnificent.

Another point in common between these two bacteria is precisely the reason why they are so large: a large vacuole. And it is that this membranous structure that encloses its genetic material is not its only organelle. They also have this membranous bag, which allows them to take advantage of energy much better than other prokaryotic organisms.

The secret of its size

Bacteria are thought to be generally so small by something known as diffusion restriction hypothesis. According to this, they have that size so that nutrients can diffuse through them without the need for an energy that drives it.

And it is that for said diffusion to take place without an energy that drives it, a reduced volume is needed. In an article from Big Think published when this unreviewed study was presented, they explain it in a very simple way. Imagine that we put a drop of black paint on the edge of a glass of water. It will easily reach the other side passively. However, if we put it on the edge of an Olympic size pool it won’t do it. We would need, for example, a swimmer who actively pushes that painting. Eukaryotic cells have transport chains that make this active transport very easy, but prokaryotes do not. That’s why they are so small.

However, this bacterium can afford greater work thanks to vacuole, which is located inside, occupying a large part of the volume. If we put a huge balloon in the Olympic pool that occupies almost its entire interior, the water will be confined to the edges and it will be much easier for the paint to pass from one side to the other.

The two largest bacteria in the world have such a vacuole. And the truth is that it would be almost selfish to think that they are the only ones. That the human being has not found more at the moment does not mean that they do not exist. In a statement, another of the study’s authors, Petra Anne Levin, explained that in the team they see it as likely that there are more out there. Possibly, a bacterium even larger than this is visible to the naked eye and, precisely for this reason, it has gone completely unnoticed. Isn’t nature fascinating?

Discover where Ethernet was born and why it is called that