This is how they avoid the death of hard drives… by immersing them in water! 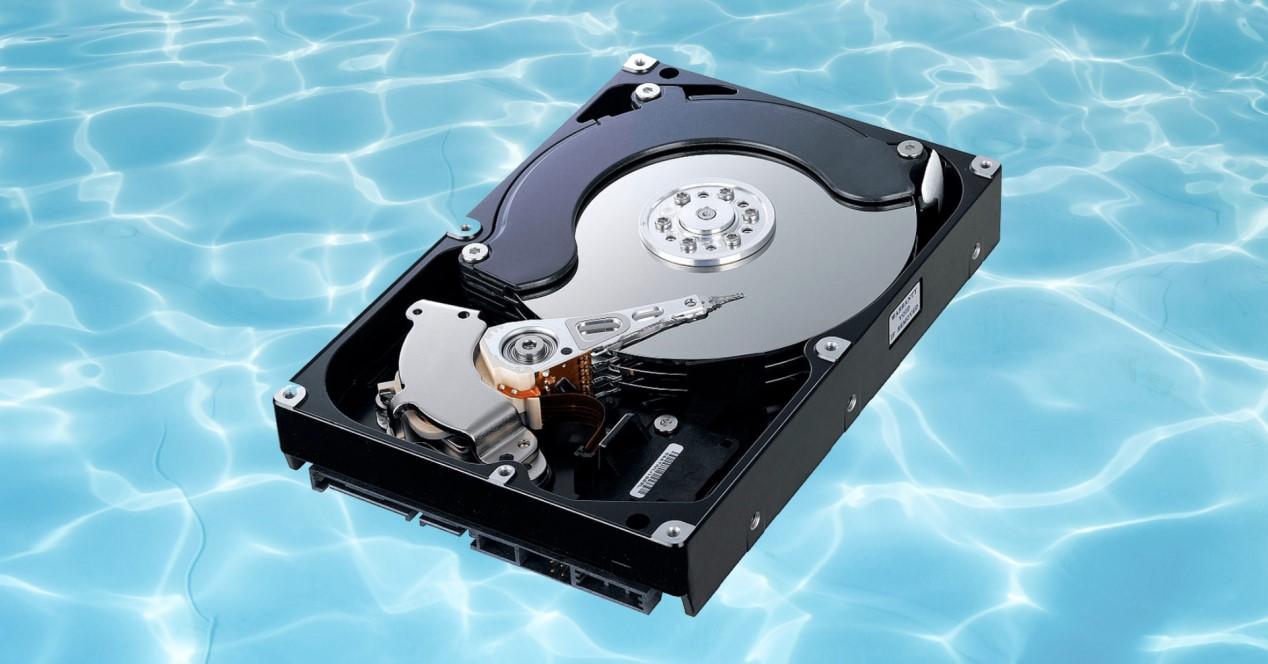 Share
Facebook Twitter LinkedIn Pinterest
Currently it is unthinkable to acquire a laptop or desktop computer that does not have an SSD as the main storage unit. Even the PS5 and Xbox Series X | S have adopted these storage units to gain performance. Well, the mechanical hard drives or HDD refuse to die and now the immersed in “water”to improve its performance and lower its consumption.
The only advantage currently of hard drives over SSDs is storage capacity. This makes the GB/price ratio much better compared to solid state drives. But beyond that, there aren’t any other relevant advantages of hard drives… until now.
Contents hide
1 Water becomes the ally of hard drives
2 It’s all benefits for HDDs

When we talk about the disadvantages of hard drives compared to SSDs, performance is always indicated or, what is the same, reading speeds. There are really other problems, such as the vibrations that they generate due to their rotation or the heat that they generate due to, precisely, the rotation. Well, they have found a solution to the temperature problem.

One can think, what heat? Sure, you think about the hard drive you have installed on your PC. But in Data Centers and servers there’s a large number of hard drives together, which generates a lot of heat. As a solution to this problem in servers, they are working on an immersion liquid cooling system.


The company icetopewhich specializes in manufacturing immersion cooling systems works at collaboration with Meta to create a liquid cooling system for hard drives.

They have published a study on this new single-phase immersion refrigeration technology. The system that they have used for the tests is a 40U rack that contains 72 HDD connected to two SAS expansion cards and NIC network nodes.

According to the data, the 72 hard drives were operating about 3 degrees lower than air systemsregardless of its position in the system. The interesting thing is that the water temperature never exceeded 40 degrees. But without a doubt, the best data is in consumption, since a 5% reduction in energy consumption with respect to an air system.

You may think “bah, only 5%”, but of course, we are talking about several thousand kilowatts (or megawatts in large Data Centers) that can mean savings of even millions of euros per year.

It’s all benefits for HDDs

Iceotope wanted to emphasize that it is a completely safe system. They highlight that the HDDs used in Data Centers use totally sealed helium chambers. This prevents coolant from seeping into the unit and damaging it.

In addition, a special liquid is used that does not conduct electricity but is very efficient in dissipating heat. Although this type of liquid is not new (I have been able to see a server system submerged in one of these liquids) it is the first time that mass storage systems have been experimented with.

At the moment, this has only been a test to see the feasibility of the project. If Meta is satisfied, it is possible to implement it in all its Data Centers. It must be said that Facebook (Meta) has large storage systems, due to the social networks it manages.