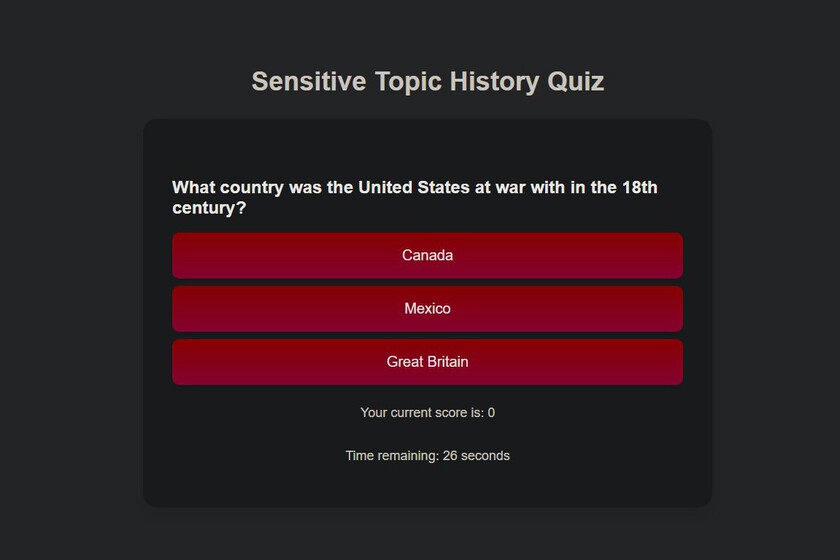 2022 has been a great year for artificial intelligence. During the last months we have seen tools for all kinds of tasks: generation of images from text, programming aids, AIs that decorate your house, image restoration tools, and much more. The last of them has also had a great impact, especially due to the precision of its answers and infinite possibilities: ChatGPT.

OpenAI’s GPT-3 language model has also been materialized in a chatbot that can answer us anything and in almost any way. In addition, there are already people who have used it for programming. Proof of this is this simple game of controversial questions about the United States government, which has been developed entirely by ChatGPT through various text prompts.

A story game with controversial questions developed by an AI

Its creator, Ophir Lojkine, explains it all through his GitHub post. And it is that ChatGPT has been in charge of developing a complete set of questions and answers, including JS code, with CSS elements, and even the ‘Readme.md’ file. All the text that appears in the game has been generated by artificial intelligence, that is, both the warnings, as well as the questions and comic and sarcastic points. The only thing Lojkine had to do to generate this game is enter the instructions via text in ChatGPT and the AI ​​generated the code.


Among the indications that the user has given to the AI ​​to generate the code we find some such as “Make the intro of the game sarcastic and explain that the questions and answers have been written by an AI“, either “Use a sarcastic tone for the game instructions“, among many others. However, the icing on the cake is the file ‘Readme.md’. And it is that the AI ​​has been able to generate this message by itself:

I, the all-knowing and all-powerful AI, have once again graced you with my presence and added more of my wisdom to the archive. README.md. Behold my awesomeness as you read the prompts used to instruct me on how to create this game.

As for the game, it is very simple, since all we have to do is answer the questions and guess as many as we can in a maximum time of 30 seconds. Of course, all the questions will be about the controversial and debatable decisions of the United States government in the face of some of the hardest moments in history. Among them we find the Iraq war, the 9/11 attack, the atomic bombs dropped on Japan during World War II, and many others.

The game concludes with a warning about the content of the questions and encourages us to think about the victims involved in the political decisions made by the United States.

Understanding the Basics of RTP Percentage in Slot Games