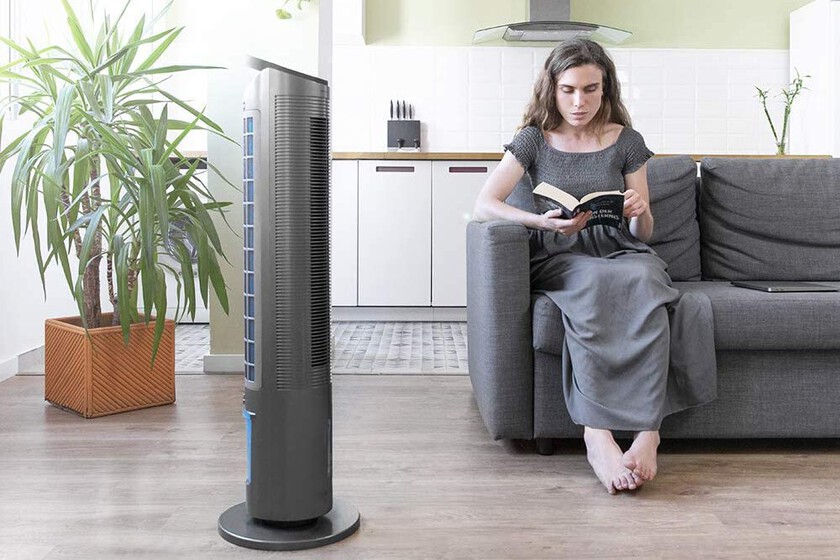 One of the options we have to cool the house in summer are evaporative coolers, devices that, as we have already seen, try to be a hybrid mix between humidifier and ventilator achieving small drops in temperature but a higher relative humidity of the air that gives that sensation of freshness.

They are not really a portable air conditioner, although due to their external shape we can confuse them, so they do not offer such a large cooling capacity like them, although in return they are capable of functioning with a lower power consumption.


How much does it cost to turn on this type of appliance each day for a period of a few 10 hours to refresh the room? Are they a good option to have them working every day without the electricity bill suffering excessively?

How much does it cost to light an evaporative cooler?

In order to calculate the electrical cost of this type of device, we first have to know how much electricity they can consume. It is a figure that varies depending on the brand and model but is usually in the range of between 50 and 80 watts. For example, if we review some popular models we have the Orbegozo AIR46 with a consumption of 55 watts, the Cecotec EnergySilence 2000 with 60 watts, the Taurus Snowfield Babel also with 55 watts, the Purline Ion Rafy 81 that goes up to 65 watts or the Taurus R501 which amounts to about 80 watts.

Bearing these examples in mind, we will take this value of 80 watts to put us in the worst case of a mid-range model. Also, we’ll assume we have it turned on about 10 hours a day.

With all these considerations, to see the average cost, the first thing we have to do is find out the price for each KWh of electricity that we are going to consume, a figure that varies every hour of the day and that will depend on each electric company, but that we can average with the data of the last weeks for the afternoon schedule (from 12:00, which is when the heat begins) and according to what is marked on the website of the Red Eléctrica Española with a average value of about €0.4/kWhgross price to which taxes will have to be added later when we receive the real amount on the invoice.

That is, our evaporator will have an electrical cost of 80 watts which are equivalent to 0.08 kWh that at an average price of €0.4/kWh entails a cost of 0.032 euros every hour. If we multiply by the 10 hours of daily use we have an expense of €0.32 per day.

If we now extrapolate to the cost of a whole month, we get a total figure of 9.92 euros for having one of these units running every day for 10 hours, as we see a much cheaper price than the consumption of air conditioners (although logically we do not have the same cooling capacity) and in line with the cost of simple fans.

Note: Some of the links in this article are affiliated and can bring a benefit to Xataka Home

for less than 300 euros in this offer

This app controls any smart device just by pointing at it: this is how it works

How much does it cost to change the battery in an Apple Watch?