Watching Spain beat Costa Rica 7-0 on TVE UHD was better than the game itself. I never thought that DTT would give this quality in the World Cup 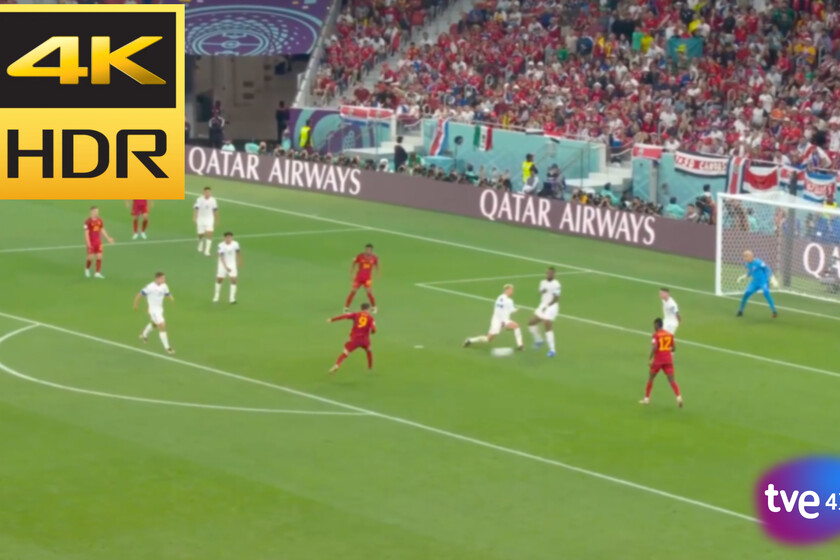 Yesterday Luis Enrique’s Spanish team beat Costa Rica 7-0 in a great match for the national team. However, it was not the goals that I enjoyed the most. He had been wanting to witness a performance by Spain like this for years in a big event like the Qatar 2022 World Cup, but I’ve been wanting to watch an open game in 4K UHD and HDR for the longest time. And yesterday was that day.

After being able to try World Goal and ending with a bittersweet feeling, watching the game on TVE UHD left me with much happier retinas. There were reasons for it, in addition to seven goals. Last year I reviewed that after about eight years of UHD, in Spain we could not see Euro 2020 in 4K neither by DTT nor by Internet, unlike what happened in countries like the United Kingdom with the BBC and its iPlayer, which has already broadcast Russia 2018 in 4K HDR.

For this year I expected the same (except for the fact that Movistar did announce that by paying we could see the World Cup in 4K), see the World Cup for free and that’s it. Until at the last minute, RTVE announced that there would be a test channel to watch the World Cup in 4K. Specifically, the matches that were broadcast on La 1 in HD. After hearing the news, I set out to tune in DTT UHD. It was a successful process, but many other people have had no luck, and the antenna is to blame.

With 4K, HDR and Dolby Atmos we have three of the greatest technological advances, but we enjoy them much less than we should in national content

Come the game, I was delighted with what I saw on the LG OLED C9. An HDR broadcast that benefited less from high dynamic range than games played in bright sun, but where the billboards and lines had a life of their own and stood out from the image thanks to the localized impact of their brightness.

A broadcast where the public, players and field had a tremendous definition, practically demo, without artifacts and where the only thing that shocked was the low quality of some cameras of the realization in, for example, repetitions. But that is a separate issue and not the responsibility of TVE UHD.

This quality of free-to-air DTT broadcasting is an international milestone, not just something to celebrate because it happened here

Compared to the 4K compression in Gol Mundial, the level of detail in TVE UHD is not the best I’ve seen (that corresponds to BBC iPlayer in football), but you don’t see strange moving halos around the players, and the pixelation is very controlled. Only in the brightness of the ball and its texture the broadcast already stands out enormouslycompared to the very poor HD versions to which we are accustomed.

Just as my eyes were not deceived with the 8 Mbps of Gol Mundial, neither were they with TVE UHD. The Digitalbitrates website analyzes the technical details of the broadcasts, and according to a sample from TVE UHD it is broadcasting with averages of 18 Mbps and peaks of 19 Mps, being 9.6 Mbps the minimum value (already surpassing Gol Mundial). With this, we are already talking about having the same amount of information live per second from Netflix, Disney +, Prime Video and others. But the thing does not end there. Gol Mundial has a “correct” sound, while TVE UHD contains in these matches a Dolby Atmos audio track at more than 500 Kbps. It is not a very high value, but similar to that of the compressed Atmos streaming from Netflix and others, but it gives you a much better immersion than a normal 5.1 or a simple stereo, especially if you have equipment that is compatible.

All this makes Whenever I can, I will watch the Qatar 2022 World Cup on TVE UHD. I would like to be able to compare with the quality offered by Movistar+ Plus with UHD, but I don’t have access to it. In any case, yesterday’s experience is just another confirmation that 4K resolution is more important in sports than in movies and series. And probably in 8K the difference between sports and other content will be even more noticeable, since in cinema it is almost imperceptible.