we know everything about the new connected watches from Samsung 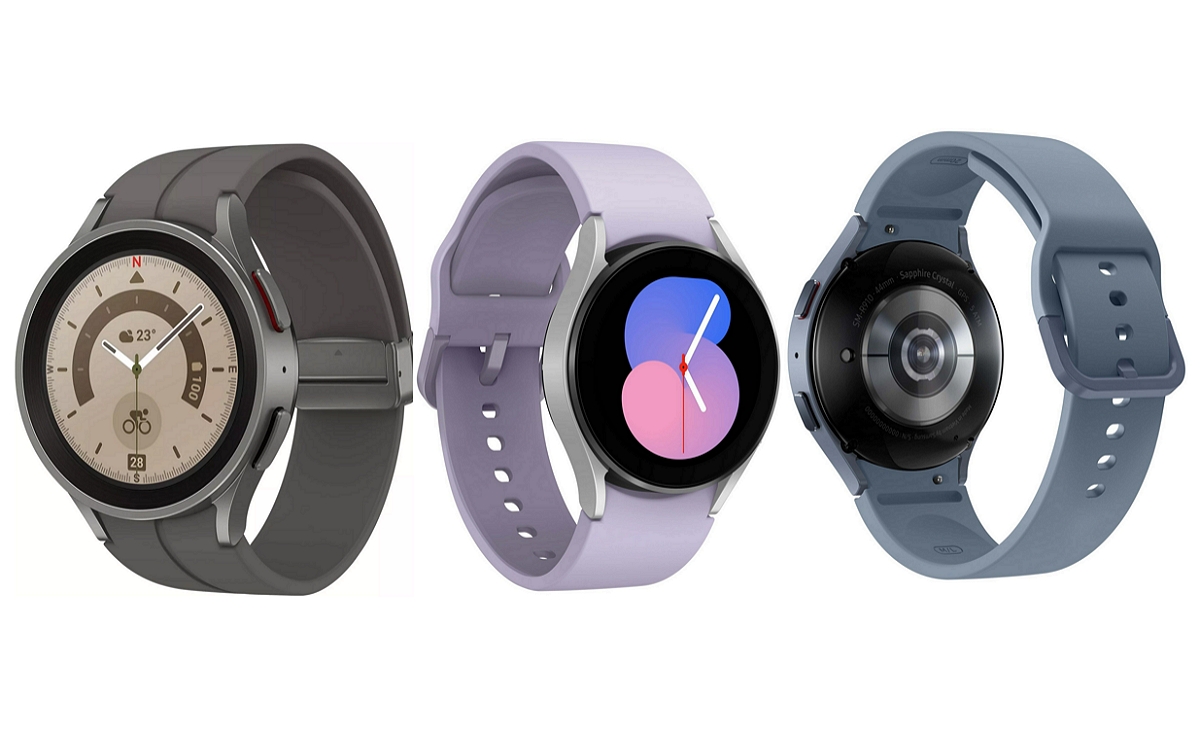 Share
Facebook Twitter LinkedIn Pinterest
Samsung is preparing to launch two new connected watches on August 10, the Galaxy Watch 5 and 5 Pro. A few days before their official launch, a report revealed all the information about them.

Just after unveiling the technical data sheet and the price of the next Galaxy Buds 2 Pro, WinFuture also lifted the veil on everything you need to know about the Galaxy Watch 5 and 5 Pro, the new connected watches that Samsung will launch at a conference scheduled for August 10. They will be accompanied by the next foldable smartphones from the Korean giant, the Galaxy Z Flip 4 and Galaxy Z Fold 4.

This year, three versions will be available. We will find two Galaxy Watch 5 in 40 mm and 44 mmand a Galaxy Watch 5 Pro in 45 mm, which replaces the Galaxy Watch 4 Classic from last year. These have already been the subject of numerous leaks, which notably revealed their design, but we now know everything you need to know about this new generation.

What technical characteristics for the Galaxy Watch 5 and 5 Pro?

According to journalist and leaker Roland Quandt, the 40mm Galaxy Watch 5 should use a 1.19-inch AMOLED round screen with a definition of 396 x 396 pixels. The Galaxy Watch 5 44mm and 5 Pro 45mm will use a larger 1.36-inch AMOLED display with 450 x 450 pixel resolution. It’s a shame to see Samsung using the same screen on two watches that don’t have the same size, since the Pro model’s screen will have much bigger borders. However, all will be protected by sapphire crystal.

The Watch 5 is expected to retain the same Exynos W920 chip than last year, as well as a capacity of storage up to 16 GB. In addition, we learn that the two models of Galaxy Watch 5 have a thickness of 9.8mmthe same as the Galaxy Watch 4, while that of the Galaxy Watch 5 Pro will reach 10.5mm. The latter will also have the advantage of offering a titanium frame much more resistant. We can also count on the presence of an NFC chip, an integrated GPS as well as an eSIM on the LTE variants.

Samsung wants to break autonomy records with its Galaxy Watch 5

For its part, the Pro version will be equipped with a much larger 590 mAh battery. This is therefore more than the 572 mAh indicated by a previous report. Thanks to this much larger battery, Samsung will increase the autonomy of its watch to 80 hours on a single chargewhich corroborates the 3 days of autonomy announced by the leaker Ice Universe, a record for a watch under Wear OS.

The two connected watches will benefit from a new charger from 10W, twice as much as the previous model. The charger will thus be able to fill your battery to 45% in just 30 minutes.

The Galaxy Watch 5 will use a new temperature sensor

The renders also show what looks like a new sensor on the back of the Galaxy Watch models, which WinFuture says was added to record your body temperature. It has now been several months since there have been many reports that Samsung has finally equipped its watch with a thermometer, which will help watch owners to quickly detect illnesses such as fever.

Finally, in terms of prices, Roland Quandt confirms all the prices that were revealed yesterday by the leaker OnLeaks. We will then find the Galaxy Watch 5 at a base price of 299 euros in its Bluetooth version in 40 mm, and 349 euros with 4G. The Galaxy Watch 5 in 44 mm will be available at 329 euros or 379 euros depending on the version chosen, and thea Galaxy Watch 5 Pro will peak at 469 euros in Bluetooth and 499 euros in 4G. The watches will normally ship with Wear OS 3.5 and a Samsung One UI Watch 4.5 overlay, but that was not confirmed in this leak.

There is more than one Arduino, and each one is intended for different uses

When choosing an Arduino board we find that there is not a single model, rather…

After the new HomePods, Mark Gurman returned to another product in his latest edition of…

In 2021, Google’s hardware division kicked into high gear by introducing the Pixel 6 and…