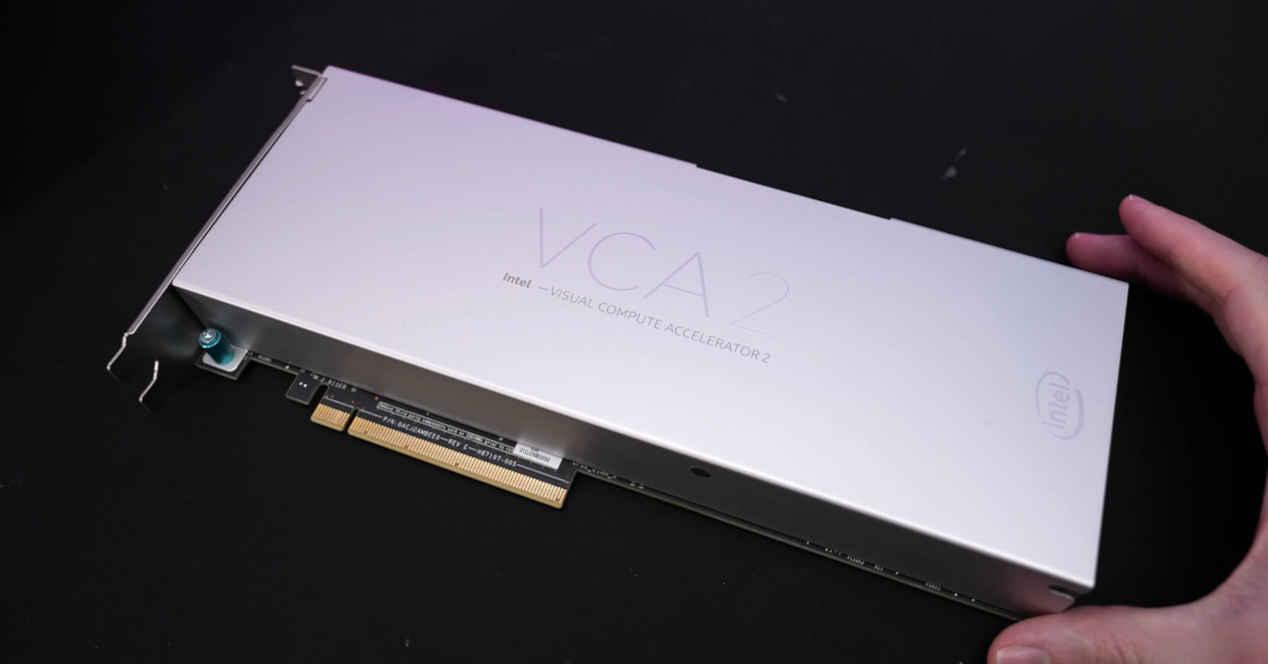 Share
Facebook Twitter LinkedIn Pinterest
It is not very normal to see a CPU inside a graphics card, although many of you will remember the Intel Xeon Phi that were on sale a few years ago. Well, a user has had access to the Intel VCA 2, a card that in principle can remember a graphics card. However, it has three Intel Xeon CPUs inside. What is this graphics card and what was it used for?

We have to clarify that we are not dealing with any new product, since the Intel VCA2 was launched in 2016. It is a piece of hardware designed to perform video encoding and decoding at high speed. To do this, they combined the speed of an Intel Core processor with the video decoder of the integrated graphics card. To this day, the company run by Pat Gelsinger uses its graphics cards under the name ARCTIC SOUND for this task. The Intel VCA 2 was not sold for the home PC market. That is why seeing images of them is rare.

Your target market is data centers. Whether to provide video access to multiple clients, in a cloud computing service. Accelerate Cloud Gaming or for real-time video transcoding. Today there are much more elegant solutions and not only in the form of dedicated graphics cards for this task. If not, we can talk, for example, of the VPUs that Google uses for its YouTube servers. In general, it is a type of hardware that has evolved in recent years. Thanks to the use of domain-specific processors, much more suitable than using a full CPU.

Intel VCA 2, the card for video transcoding with 3 Xeon

Through the der8auer channel we have been able to learn of the existence of an Intel graphics card for servers and data centers with a very particular nature. We are referring to the already discontinued Intel VCA 2. Which appears at first glance to be a graphics card with a GPU or several as the main processor. As well as its VRAM memory. However, after disassembling it can be seen that this is not the case.

At first glance it may seem like a simple graphics card from the lot because of its shape. But it is to disassemble it and find ourselves with a less curious plate. As you can see from the pictures, includes three Intel Xeon E-1585L V5 processors. This CPU of four cores and eight threads is based on the skylake Architecture, and his TDP is 45W. Which tells us that it is a processor for laptops. Which is confirmed by the dTwo SO-DIMM type slots with support for up to 64 GB DDR4 per processor. For intercommunication between the three processors, and with the PCIe 3.0 x16 interfaceuse is made of a PLX chipset.

Regarding the technical capabilities of the device, it supports up to 44 simultaneous streams in real time. Under what conditions? Resolution Full HD and H.264 codec. Instead, if the resolution is 4K, then the number of video streams is reduced to 14 under the same video encoding. At least a curious piece of hardware.