what is the future competitor of the Galaxy Z Fold 4 worth? 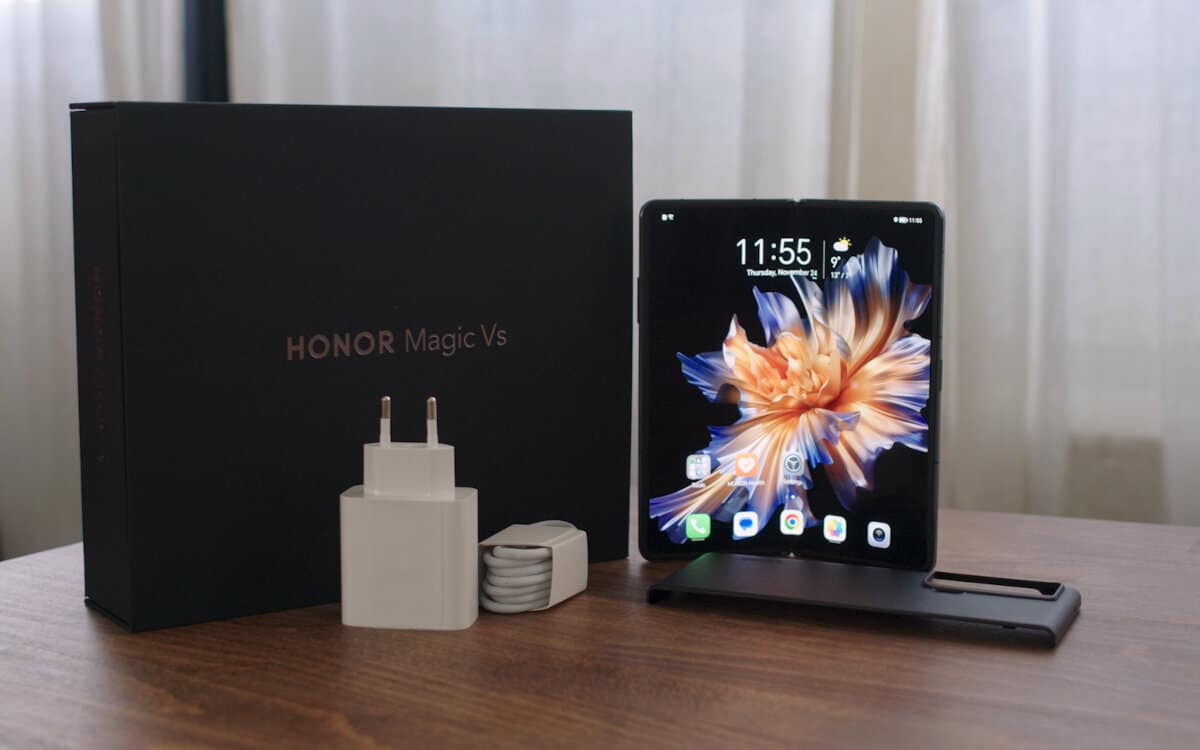 Share
Facebook Twitter LinkedIn Pinterest
Honor announces the upcoming arrival of Magic Vs in France, one day after the formalization of the folding phone in China. If the price and the release date have not been revealed, the technical sheet is not without interest. But is the product any good? Can it compete with the Galaxy Z Fold 4, whose only opponent in France is Huawei’s Mate series? We tried the Magic Vs to answer his questions.

Yesterday, Honor organized a conference to present several novelties. We introduced you to the Honor 80 and 80 Pro at the very beginning of the day. The Honor 80 very logically replaces the Honor 70 that we tested in September 2022. The Honor 80 Pro is a “premium mid-range” smartphone with a nervous technical platform. Neither of these two phones will be released in Franceinformation that we obtained from the teams of Honor France. 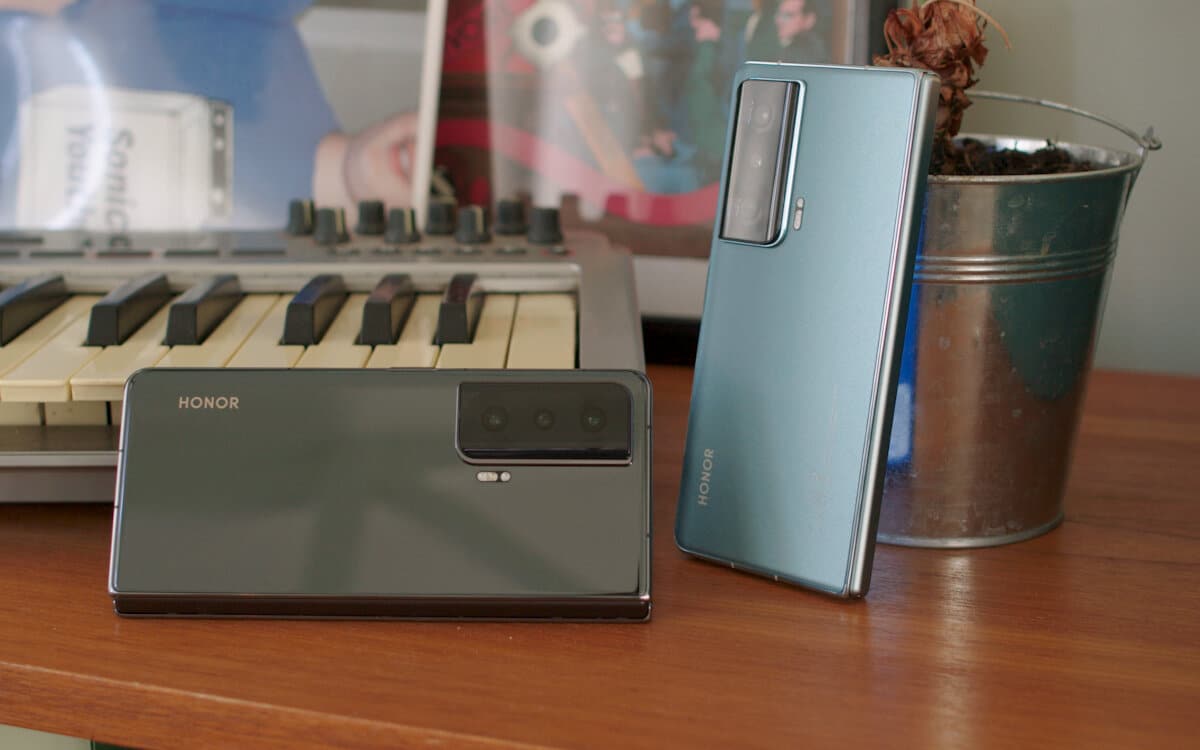 In the same conference, the brand also lifted the veil on a new folding smartphone, the Magic Vs. This is not a surprise, since its launch was announced a few days ago. The Magic Vs is the Honor’s second folding smartphone after the Magic V which was announced in China in January 2022. The Magic Vs takes up many technical elements, but above all the ergonomics based on that of the Samsung Galaxy Z Fold 4. And, little surprise, Honor France confirms the arrival of the phone in France.

Our hands-on video of the Honor Magic Vs

The commercial launch will take place in the course of first semester 2023. The exact date is not yet fixed. And the price of the smartphone should be around 1500 euros. Even a little more, without reaching the price of the Galaxy Z Fold 4. But Honor tells us that the price is not yet fixed. This will depend on the brands that will reference the product. In China, the Magic Vs is offered from 7500 yuan. Or 1100 euros. 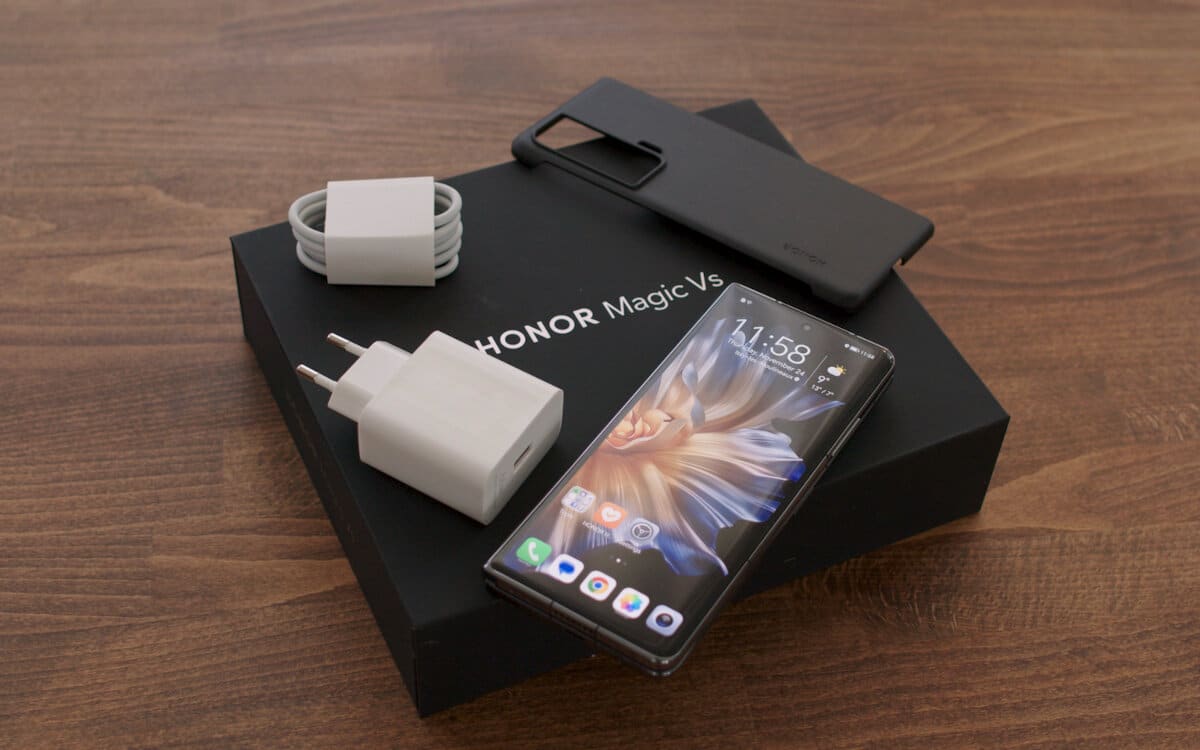 On the occasion of an event organized in Paris, we had the opportunity to try the Magic Vs. You can find all our impressions in the second part of this article, as well as in our video above (and available on our YouTube channel). But, before we start, let’s take a look at the complete technical sheet of the product, which is very similar to that of the Magic V, with some modifications. 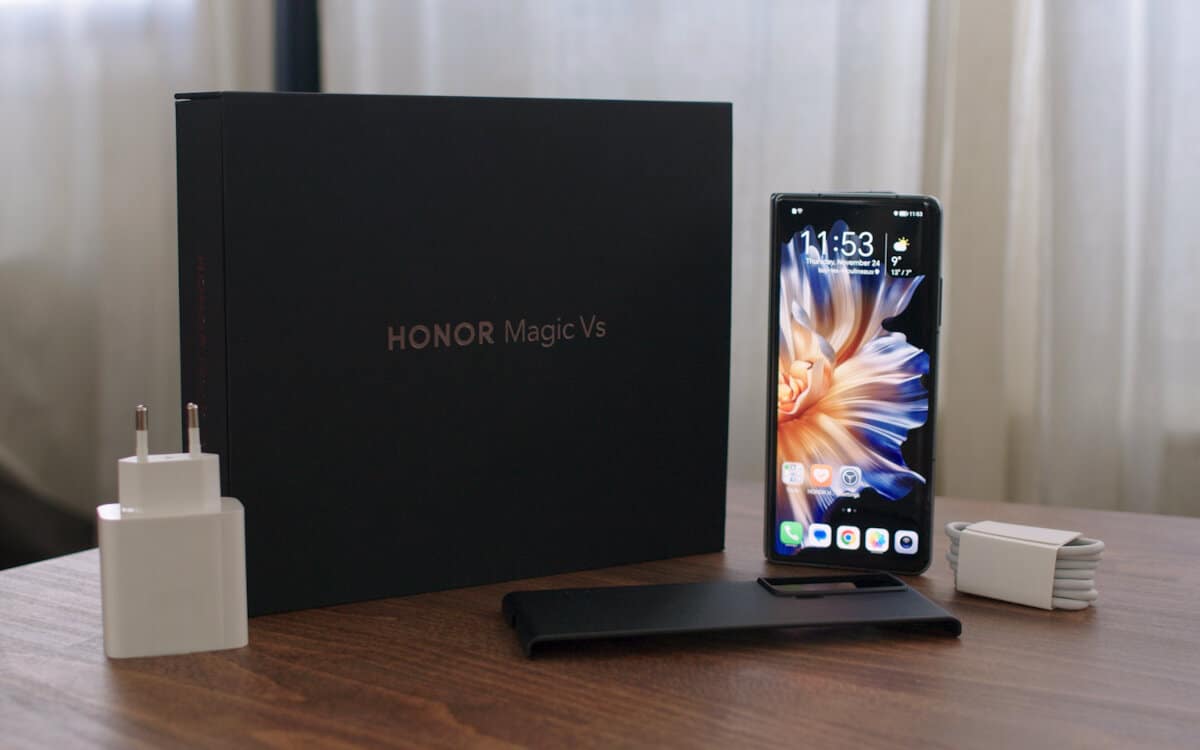 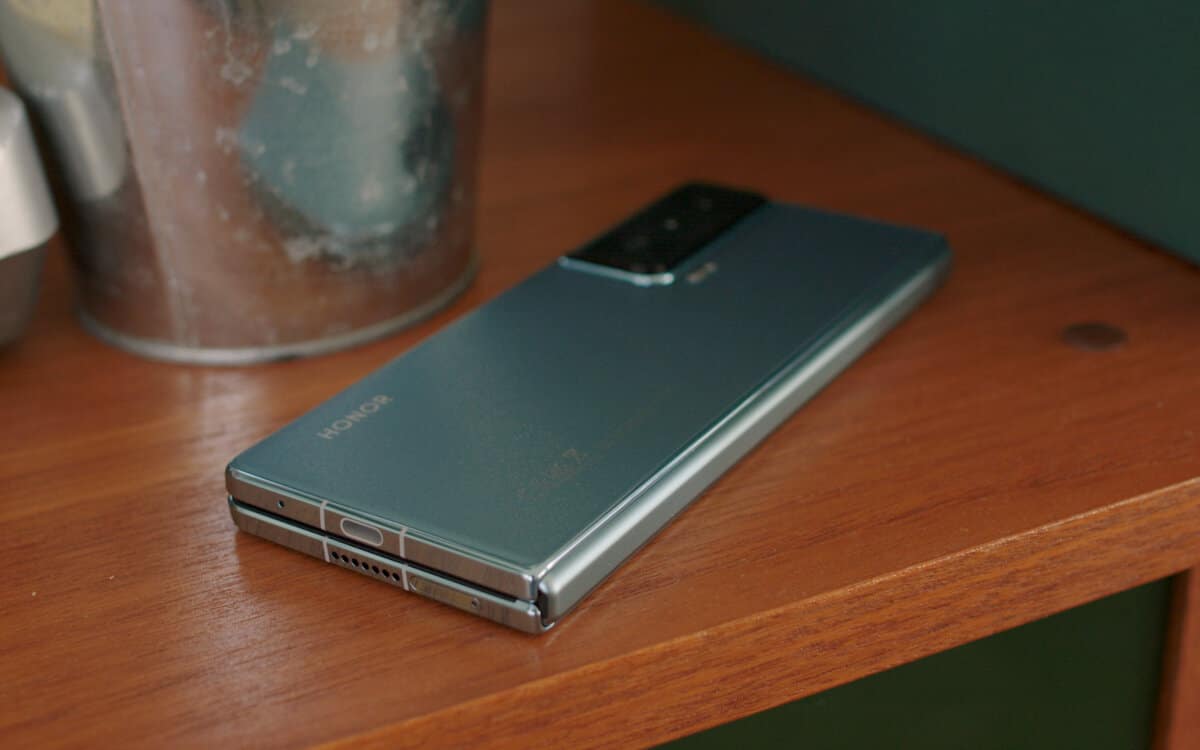 Still inside the smartphone, we find two 2500 mAh batteries, for a total capacity of 5000mAh. It is an improvement over the Magic V which has a capacity of 4750 mAh. The Magic Vs takes over the 66 watt fast charge of his predecessor. On the edges, you find the fingerprint reader, as well as two stereo speakers, which are IMAX Enhanced and DTS compatible.

The Magic Vs is equipped with 5 photo sensors

For the photo, Honor placed five sensors in its Magic Vs. This configuration is quite classic, taken almost identically to the Magic V. It is also very close to that of the Galaxy Z Fold 4, but a little behind that of the X Fold and X Fold+ of Live. Here are the technical specifications: 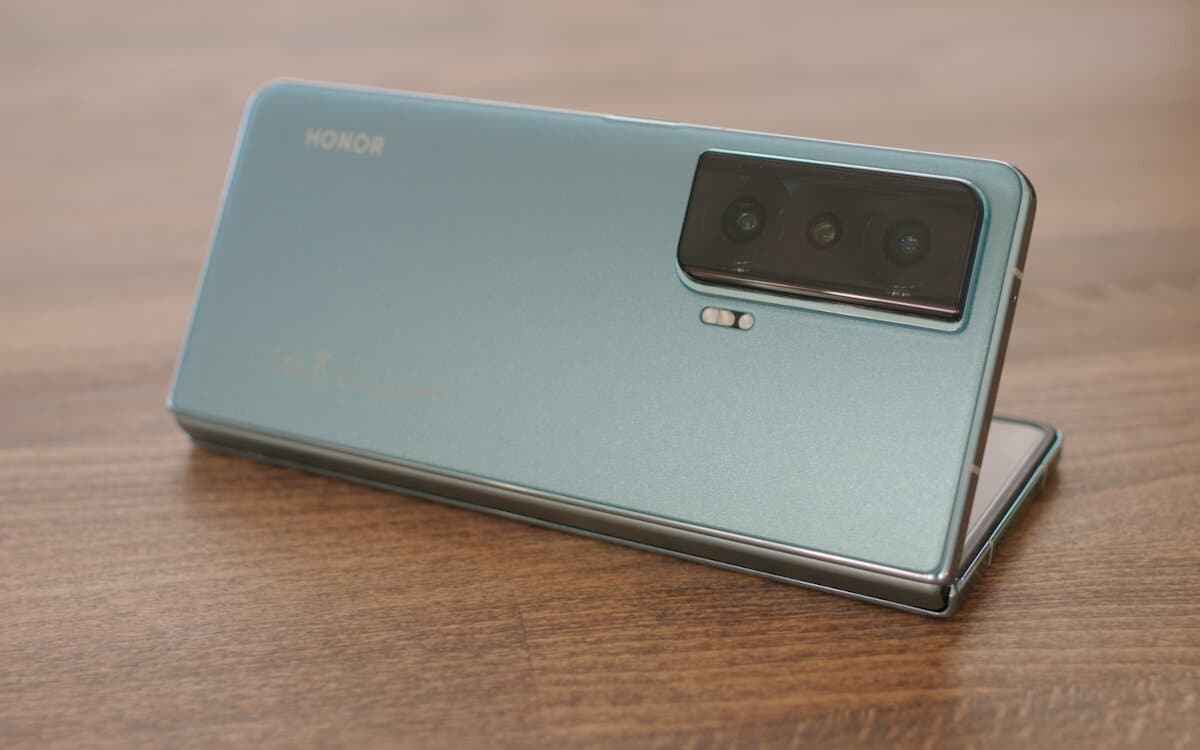 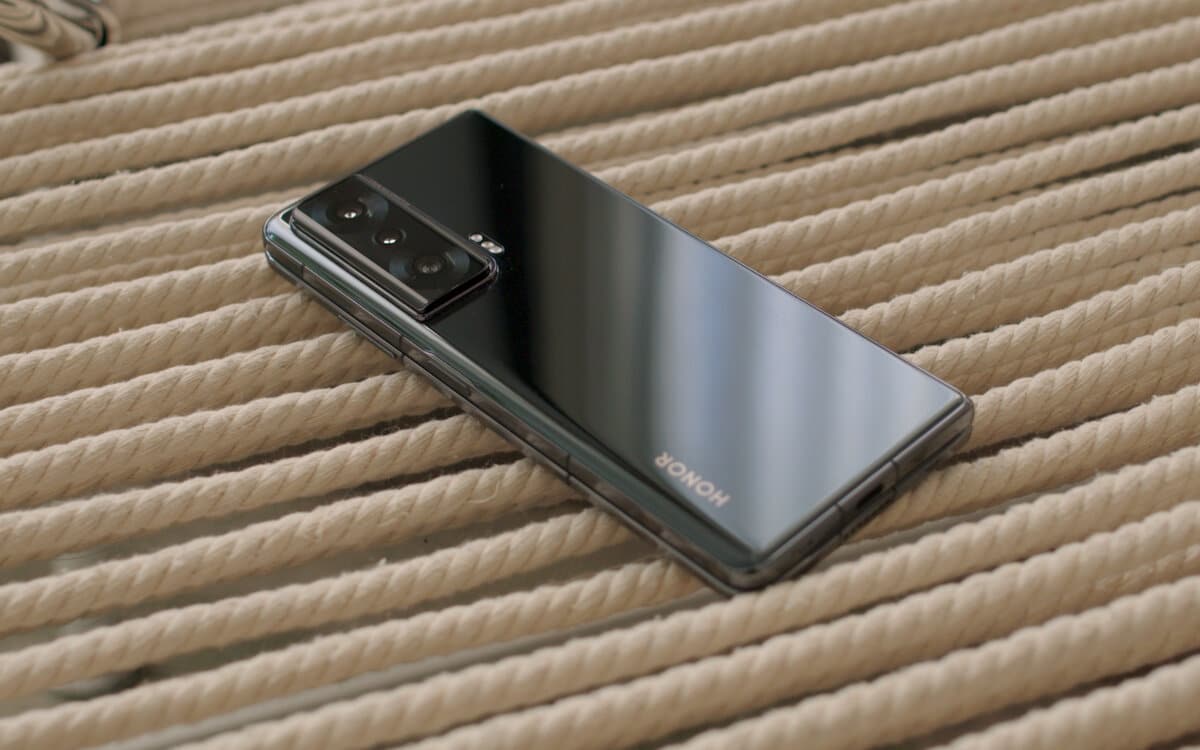 There are three configurations in China, with 8 or 12 GB of RAM and 256 or 512 GB of storage. Not all of them will land in France, Honor assures us. The same goes for the colors. There are four in China: orange, black, blue and gold. But the latter will not arrive in France. And the orange version could also be discarded. In addition, an Ultimate version with 16 GB of RAM, 512 GB of storage and a 3D shell has been unveiled. Honor France does not refuse to launch it. But it will certainly not be a priority.

The Magic Vs is very pleasant to handle

Now let’s get to the actual handling. The smartphone benefits from fairly classic ergonomics for the “book” type folding segment. And we notice quite quickly that this Magic Vs is more akin to an X Fold from Vivo, than to a Galaxy Z Fold from Samsung or a Find N from Oppo. Why ? Because the external screen adopts a standard smartphone format. It is therefore perfectly usable for all the uses that you could have with a non-folding phone. The internal screen therefore becomes a comfort accessory, rather than an obligatory passage. 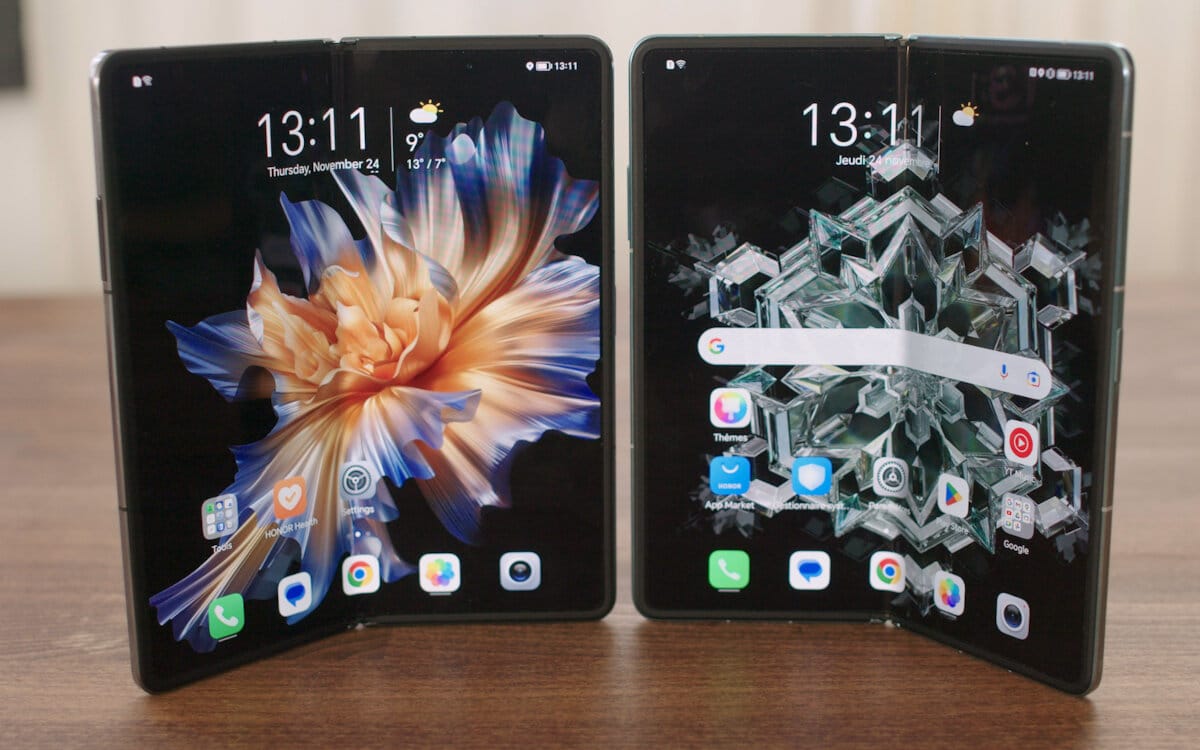 The Magic Vs is a fairly thick smartphone, like all models of this type. But it is quite light once in hand. He weighs 261 grams, a little less than the Fold 4 and much less than the X Fold (which exceeds 300 grams). This is due to the use of magnesium for the chassis. The positioning of the technical elements is very classic, but effective. The black color here has a glossy finish that retains fingerprints, while the blue version benefits from a less messy matte and iridescent coating. 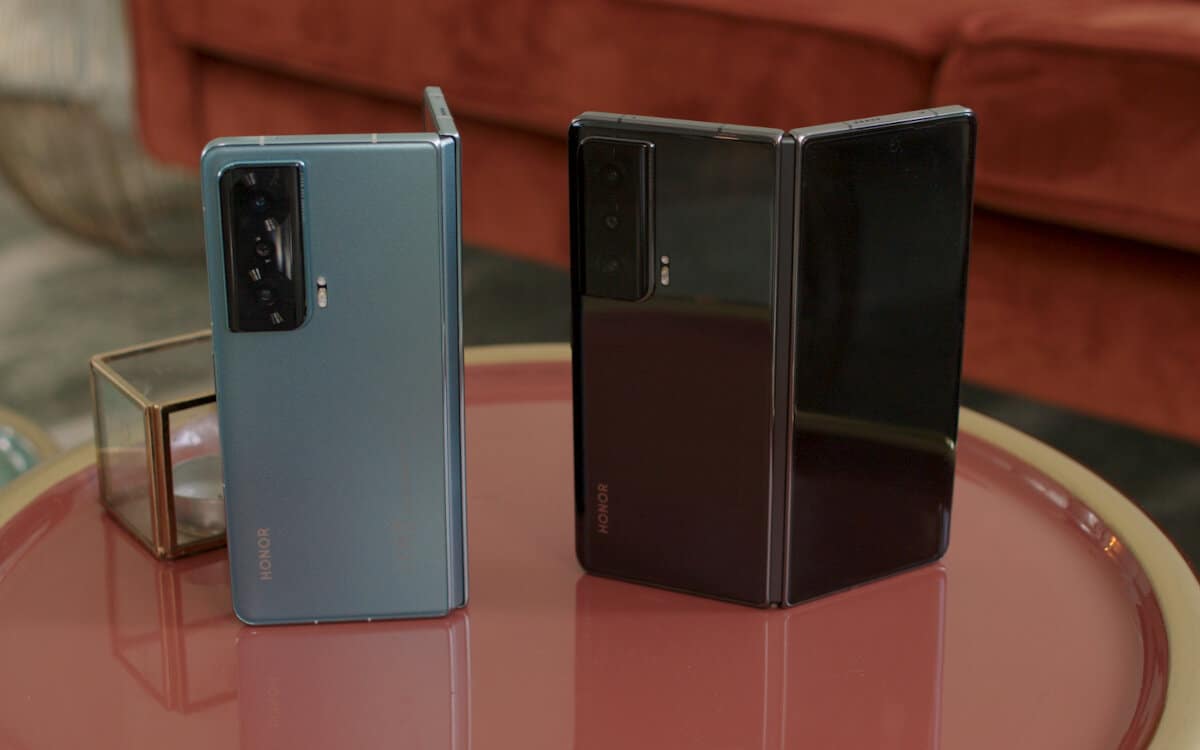 Let’s talk about the hinge, which has been largely reworked since the Magic V. This is made up of only four elements, according to Honor, and all the screws have been removed. This means that it is simpler. It opens and closes quite easily, both with two hands and even with one hand. But there is no game either: you can easily find an intermediate position, with the uses that go with it. Unlike the Fold 4, there’s no gap between the two parts of the phone when it’s closed. 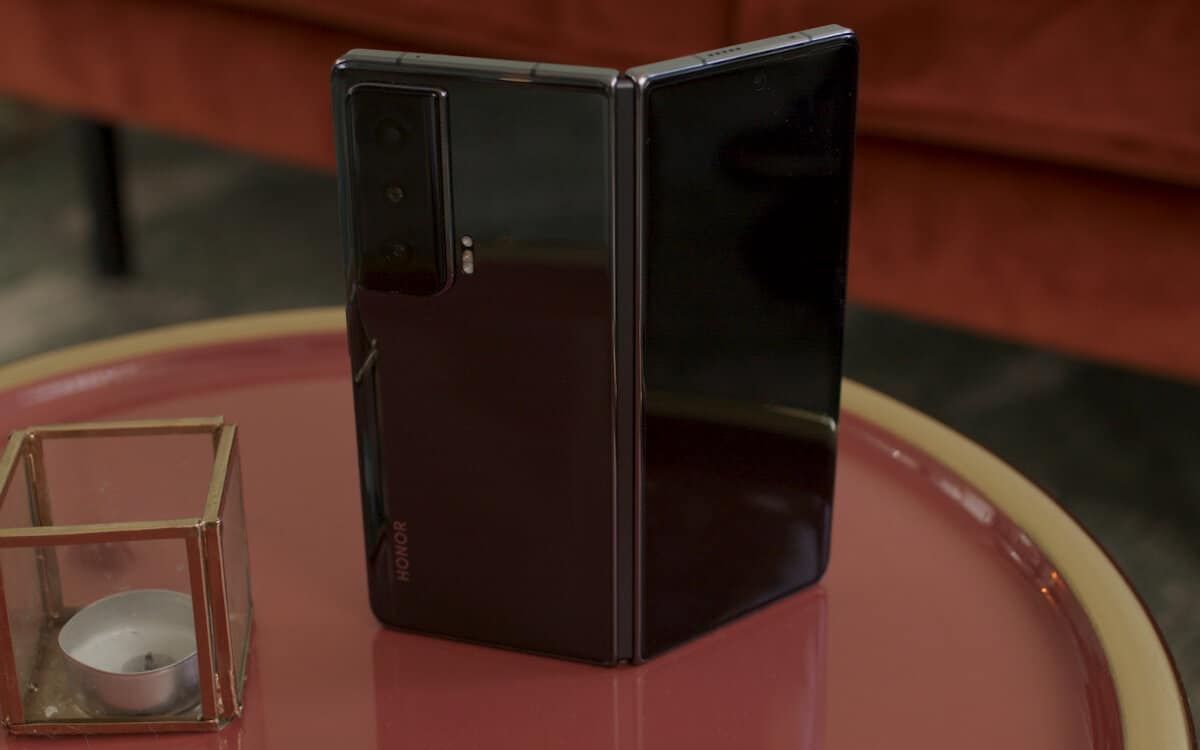 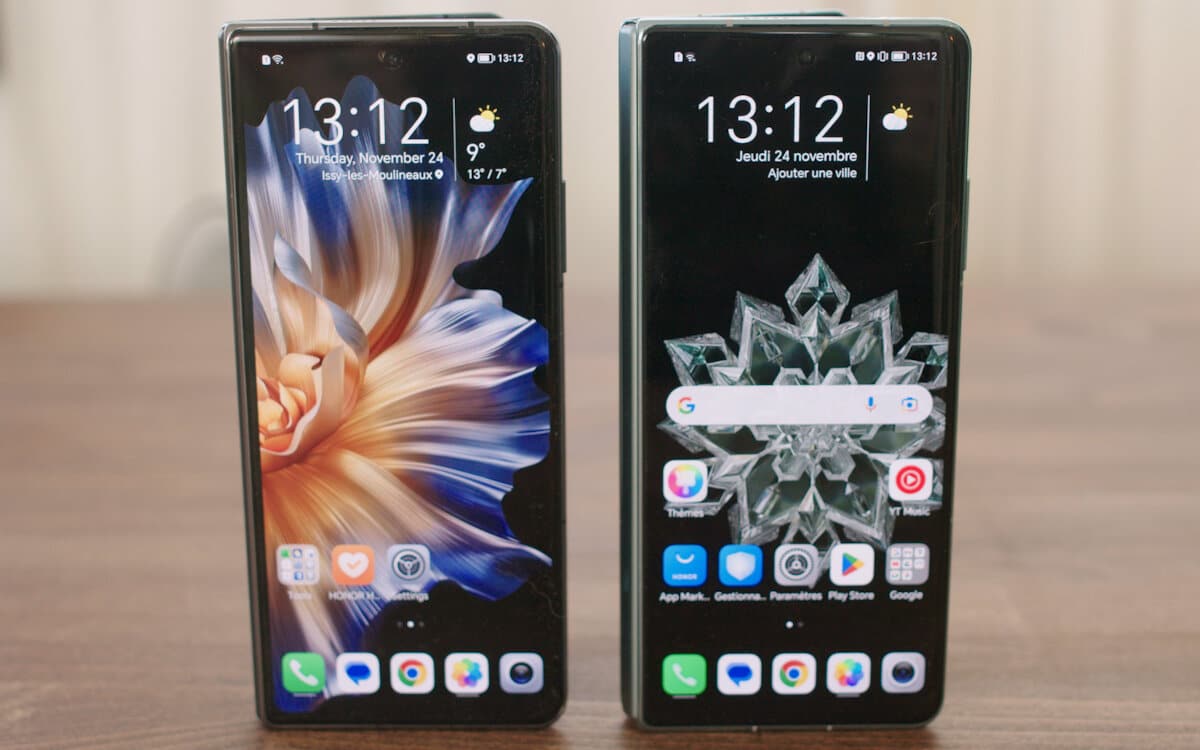 The Magic Vs is a pleasant product to use. We had a lot of fun trying it out during this grip, which reminded us a lot of the Vivo X Fold. We are now looking forward to receiving it and imposing our test procedures on it to measure its technical qualities (battery, performance, screen and photo). See you in a few months for our full test.