WhatsApp reactions finally arrive: files of up to 2 GB and groups of 512 people 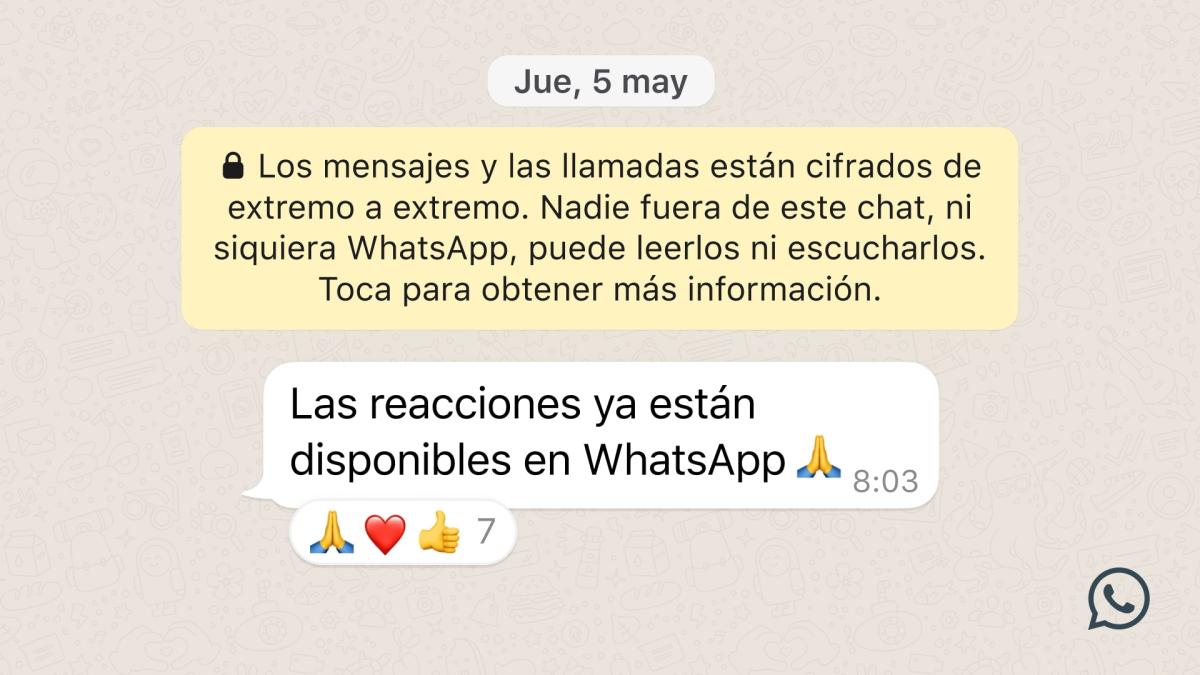 Share
Facebook Twitter LinkedIn Pinterest
After weeks of leaks and images of how reactions would work on WhatsApp, Mark Zuckerberg has announced that it is already a reality, and it will be available immediately to all users.

It’s been several weeks now where WhatsApp, messaging platform par excellence worldwide, he kept announcing that they were working on a myriad of changesand today, finally, perhaps the most anticipated of all will be available to all users.

A month ago we announced that WhatsApp I wanted to match Telegram by allowing the sending of files up to 2 GBa function that aims to be of great help for the possible transfer of the same between its users.

In the same way, it was commented that WhatsApp would be working on expand the maximum number of users in a groupgoing from the current 256, to 512 (200,000 on Telegram), double. This is also related to the possible exit of the Communities, a function in which WhatsApp works intensely, as they mention in their official blog.

And above all, the most awaited of all, The reactions. It’s been several weeks without stopping on news related to the tests of the same in the betas of the different platforms, and today, we have good news.

As announced by Mark Zuckerberg, WhatsApp reactions They are already official for all usersand what’s more, it doesn’t come alone, since starting today, sending files of up to 2 GB will be allowed, and the limit of users in a group is increased to 512 people.

It must be said that the activation of these functions it is done graduallyand that it is not necessary to receive any update for them to be activated, this simply goes through an activation on the servers, and this is done in a staggered and scheduled manner.

That is why Mark Zuckerberg has said that it is possible that a large number of users may not be able to use these new features immediatelybut should arrive over the next few days.

Once these features have been announced, we can only wait to see when the company owned by Meta decides to also introduce Communities, although honestly, it would be understandable if it took a while, it is not a function that requires little development time.

WhatsApp on two phones at the same time! This is how the most desired novelty works

But yes, it should, or at least within a month, also activate the surveys in the groups. Yes, it is true that reactions can be used in response mode, but already having such a high capacity of users in a group, surveys would be mandatory in order to get the most out of so many users.