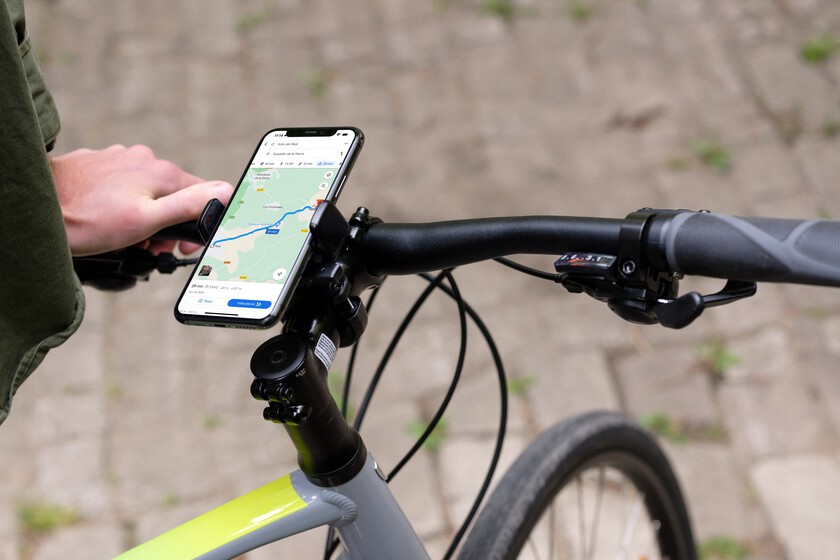 Share
Facebook Twitter LinkedIn Pinterest
Getting around by bicycle has many benefits for health, at the same time that it is good entertainment and an increasingly widespread way of getting around. Nevertheless, using the mobile as a GPS navigator to guide us can be problematicwhether by city, highway or countryside.

We have previously seen all the uses of the mobile phone in the car that carry a sanction. And by bike it doesn’t change much, so know what we can do and what not it is vital, both to avoid fines and accidents, which is ultimately what it is all about.

It should be noted at the outset that It is not forbidden to use the mobile as a GPS on a bike. In fact, we can see how there are usually apps like Google Maps that integrate news for cyclists. Now, not everything goes and if an agent stops you misusing it, you could get a good reprimand and a gift “recipe” (a fine).

As explained by the DGT, and in accordance with the Traffic Law, It is not allowed to manipulate the mobile with the bicycle in motion. As is evident, this causes us to completely divert our attention from the road and can cause a fall or collision with a vehicle or pedestrian. Therefore, it is considered a serious violation.

Although the mobile is not being used directly and just carry it in your hand, is also considered a serious violation. In this way, if a Police officer or Civil Guard observes this situation, he can sanction the cyclist with a €200 fine.

Type of sanctions of the DGT

You can use the mobile if you are stopped in an appropriate place for it. If the arrest is made in the middle of the road or sidewalk, as well as in any other inappropriate situation, there may be a sanction. Although in this case it would not be due to the use of the mobile, but because it hinders traffic and poses a danger to other vehicles and/or pedestrians. As also happens when traveling with a car, we emphasize that there are no mobile phone holders approved by the DGT. The normative does not prohibit the use of supports, but there may be problems with their placementwhich will always be at the interpretation of the agent.

There should be no problem carrying your phone on a handlebar mount (or anywhere else on the bike) if you are not interacting directly with your smartphone and if this mount does not impede the visibility or mobility of the bicycle. Now, otherwise, there could be a penalty of the same amount as those explained above (200 euros).

Again relating this regulation of bikes with that of cars, the use of headphones is also not allowed. It doesn’t matter if they are wired or wireless, used to listen to music, GPS voice directions or anything else. The simple fact of wearing them makes it difficult to pay attention while driving (even on a bike) and is also a serious offense and a sanction of 200 euros.

Bearing in mind that there are no bicycle driving licences, at least in Spain, these sanctions do not imply loss of points. And it is also clear to say that the fact that a cyclist also has a driving license is not a reason for it if the offense was committed on the bike and not in the car.