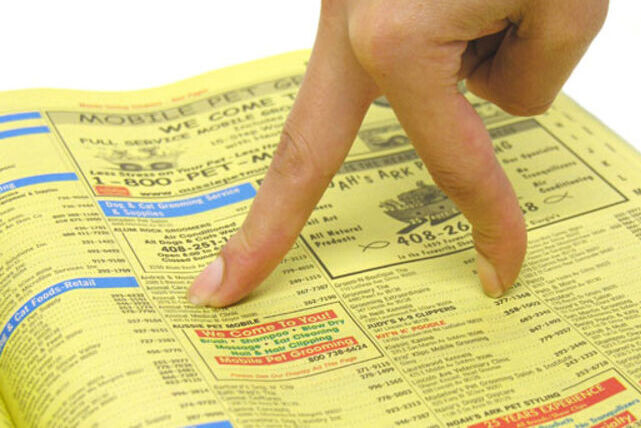 Share
Facebook Twitter LinkedIn Pinterest
Today, the zeal around the privacy of our personal data It is increasing week by week. Scandals like the one with Cambridge Analytica, which brought millions of Facebook users into the conversation, have increased our alert level on the matter. But there was a time in our history when this was not the case. A bygone era. A time of paper.

We talk, of course, about the Yellow Pages and the White Pages. Something that perhaps the newest in this world do not remember, or perhaps they were born when they were almost extinct. We are talking about two books. Fingers pounds with thousands of pages each containing all our phone numbers along with our names. But not only that. There was also our address. More than one European privacy commissioner would be blown away by this concept. Everything was public.

The companies paid, the subscribers appeared without further ado

Although its invention had happened almost 80 years before, the yellow pages would not arrive in Spain until the 1960s. Specifically, in 1967. They were introduced by Telefónica and at their peak popularity they weighed almost 2 kilos. Not bad if we take into account that its pages had a very low grammage. Each page weighed very little but there were many. many.

The yellow pages were yellow for a very specific and very little planned reason. When they were originally printed, the person in charge of the printing ran out of white paper available (more expensive and slow to produce and scarce, due to bleaching treatments) and he resorted to cheaper sheets of yellow paper. The model was successful and has since become the norm.

In its first editions, in the Yellow Pages it was only possible to find companies and businesses. The great book of telephones was a sort of business directory, from bars to multinational offices, that users used to be able to contact them. The Internet that we know today was not even in the minds of its creators, sites were asked for the address and address, businesses were called looking for the number in the Yellow Pages before.

But this changed when the Yellow Pages decided to continue growing and split. How? With the creation of the White Pages. This meant that we now had a business directory, riddled with advertisements that businesses paid for to appear better positioned and more visible and that sponsored its printing and distribution, and an individual director. And in said White Pages, each name of each subscriber to a fixed telephone service appeared along with their address and telephone number.

Yellow for companies, white for individuals

The White Pages were, therefore, the telephone directory of an entire country. Not only from Spain, of course, since they were present in all the territories where there were also Yellow Pages. One guide complemented the other and privacy was conspicuous by its absence. You could open a random page, put your finger on any position and call any phone number and ask for someone whose name was there. Okay, it was just his initial and his last name, but it worked just the same.

Throughout its long life, the Páginas Amarillas and the Páginas Blancas underwent various design changes, such as the one experienced in 1995 with the change from what was then Cetesa to ‘Telefónica Publicidad e Información’. With the arrival of the Internet, the impressions were reduced and the public was lowering, until in 2010 both guides were published in a single volume. One that had to be turned around to access one or another directory. The business on the one hand, the personal on the other.

The white pages, in fact, were the first to go out of print. It was in 2012, although the company directory would continue for 9 more years, until 2021, in which its “printed death” was certified. The yellow pages had already been in an online format for some time. They were a website with a fairly precise search engine that allowed any company to be located from anywhere. All it took was an active Internet connection.

Today we still put our hands to our heads remembering that time when anyone could know our phone number and address just by looking for us in a directory that had our information printed in alphabetical order. Today we fight against cookies, use different two-step authentication systems and exhaustively configure the privacy options of any application. Just 10 years ago, our data was in a paper book. The world has changed. We believe that for the better, but it is a matter of opinion.-