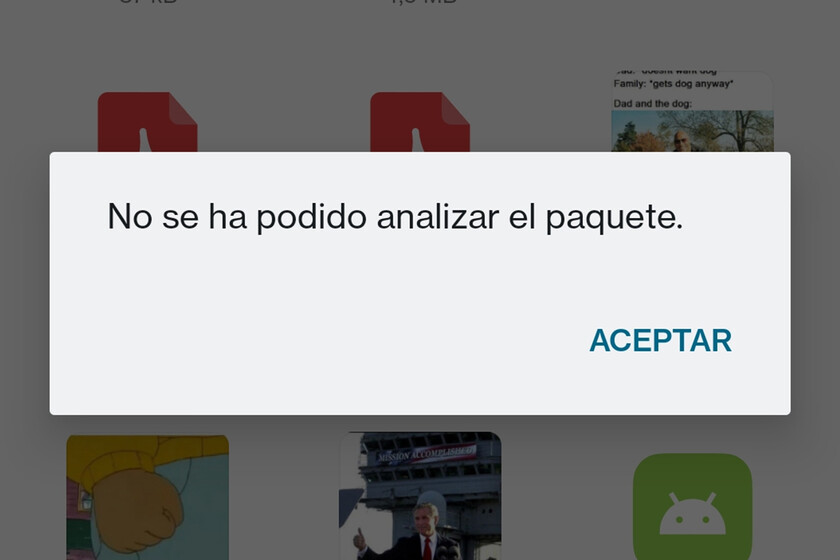 Share
Facebook Twitter LinkedIn Pinterest
Installing and updating applications can give you problems if you do it from Google Play, but even more so if you try to do it from an APK file. One of the most enigmatic errors that Android throws at us when doing so is that of “could not parse packet”. What does it mean?

Google Play automatically downloads the version of an application adapted to your mobile, but when you install an APK, this may not be the case. Android warns you that unable to proceed with installation with different error messages, and the package could not be parsed is one of them. We tell you why it appears and what you can do about it.

Why does it say “the package could not be analyzed”

An APK file is basically a ZIP file with a series of files inside with the necessary data to install the application on our mobiles. Before Android asks if we want to install or update the app, the app installer you need to read some basic data from the APKsuch as its name, icon and identifier, to know if it is going to be installed as a new application or as an update.

When this process works correctly, we are shown the message Do you want to install this application? This message is always displayed, even if the application is not really compatible with our system because it is not on the correct architecture (for example, if you are trying to install an x86 APK on an ARM64 mobile). If it fails, the message we will see then is The application has not been installed because it is not compatible with your phone.

When we try to install an app for a different architecture than our mobile, we receive another error message

The above message is pretty self explanatory, but the same cannot be said for “Could not parse packet”. What package? What does this mean exactly? In plain words, it means that Android cannot read APK filefor any circustance.

And what reasons could those be? The most common are two: that you are trying install an APK for a version of Android higher than the one you have installed, or the APK file is corrupted or fake (for example, it is a file of another type renamed to APK). In both cases, when trying to install the application you will receive the message Unable to parse packet.

How to solve it

This error means that Android does not understand the APK file

The solution for this problem will depend on the cause. If the problem is that you are trying to install an application or game that needs a higher version of Android than the one you havethere are only two possible solutions: update the Android of your mobile or install an APK for a previous version (if it exists).

By updating the Android version of the mobile (either manually official or unofficial) to match or exceed the minimum version, you can now install the APK. Another possibility is to get the APK of that app or game for an older version of Android that is equal to or less than the one you use. This is only possible when your phone meets the minimum Android version requirement, but you downloaded the APK for a later version.

If the problem is that the APK file is corrupt, the most common cause is that it has not been downloaded correctly or that the file uploaded or sent to you is corrupt for some reason. Try downloading it again, and for safety, download APKs from trusted sites that do security checks, such as APKMirror or UpToDown.