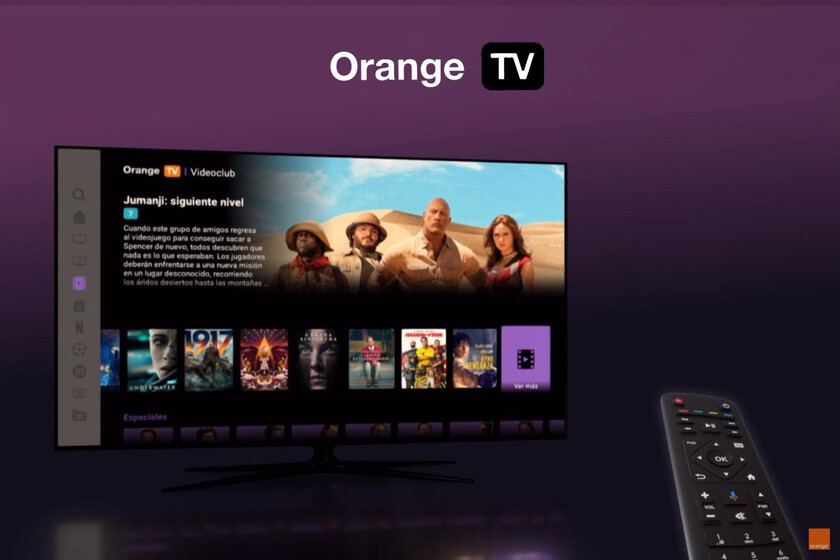 Share
Facebook Twitter LinkedIn Pinterest
This week the new rates that Orange presented days before, although in reality they are not so new, but rather offer a offer more focused on televisionwith differences not only in content, but also in compatibility with the set-top box for the television, and availability according to rates.

The new Orange TV differs basically by two channel packs, officially with 60 and 90 channels respectivelyalthough in the comparisons we will talk about 30 and 50 channels, which are the premium channels included once DTT and news/international channels have been discounted.

The most basic package of the new Orange TV includes a basic selection for the whole family, and can be contracted with the rates Love with Initial TVand with the contract rate with unlimited data Go Max TV Initial for 35 euros in total. That is incompatible with decoder for the TV.

Furthermore, in the case of rates Love, the price starts from 57 euros with 500 Mbps fiber and an unlimited mobile line for personal use, but it can also be contracted with two mobile lines without speed limitation, 1,000 Mbps fiber and Amazon Prime included for 77 euros. Orange TV +90 channels, and the arrival of Netflix, Disney+ and Amazon Prime

The most complete package of the new Orange TV reinforces the content for the whole family and allows it to be complemented with content from platforms such as Netflix, Disney + and Amazon Prime at a lower price than if they are contracted independently. The contents of other platforms are included in the Orange TV search engine, but to view them, it will be necessary to use the corresponding app, since this package would also not support decoder in the following cases:

All 90 channels are included in the mobile contract rates from 40 euros per month with Go Max Supra and Go Max Cine y Series, but only the 50 euro rate is compatible with the activation of Netflix or (Amazon Prime + Disney+).

The 90 channels will also be included in the rates Love Cinema and Series, from 67 euros with Netflix, fiber at 500 Mbps and an unlimited mobile line for personal use, while with two mobile lines without speed limitation, fiber at 1,000 Mbps and the option to choose between Netflix or (Amazon Prime + Disney+), it has a total cost of 87 euros. If you don’t want to choose, and you contract the contents of the three platforms, the price rises to 97 euros with the Love Cine and Series Total 2 rate.

The main channels and contents that are added with respect to the package with 60 channels, are: The same package with 90 channels will also be the only one compatible with a decoder for the television, but only when it is contracted together with the soccer channels, and that is only possible with fiber rates, from 70.90 euros with fiber at 1,000 Mbps.

love football, with 500 Mbps fiber and an unlimited mobile line for personal use, is priced at 100 euros, while the version with two mobile lines with no speed limit, 1 Gbps fiber and the option to choose between Netflix or (Amazon Prime + Disney +), has a total cost of 115 euros. If you do not want to choose, and you contract the contents of the three platforms, in addition to accessing all DAZN, the price amounts to 130 euros with the Love Fútbol Total 2 rate.

The complete range of channels included in Love Fútbol with decoder is as detailed in the image: Regardless of the contracted television package, with 60 or 90 channels, users will be able to complement with more specific extra channels, among which are the following optional packages: What other advantages does Orange TV provide?

In addition to the pay channels available, contracting the pay television service with Orange provides many other advantagesamong which are:

what they are, what to look for, advantages and disadvantages

What are the advantages of buying on Amazon?