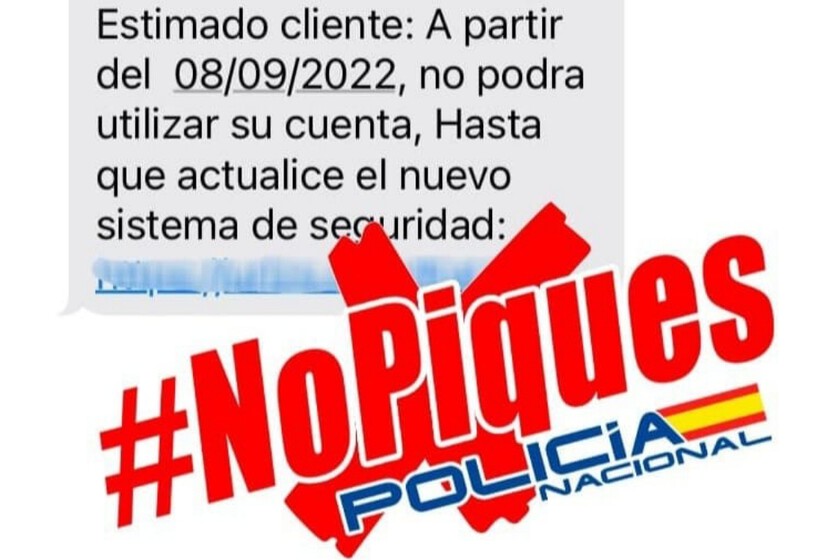 Share
Facebook Twitter LinkedIn Pinterest
Unfortunately, it is not uncommon for us to see news about scams related to phone calls or scams that arrive via SMS. However, today’s news is somewhat more pleasant in the sense that an organized gang has begun to dismantle dedicated precisely to scamming using both methods.

The National Police itself has reported this week on the arrest of eight people who were acting in different parts of Spain and whose modus operandi lay in usurp the identity of banks both by SMS and phone calls in order to seize the victim’s bank account. The negative part is that, according to the security body itself, the gang may not be completely dismantled.

Contents hide
1 First a message and then a call. This is how they tricked their victims.
2 The scam could still be alive, but you can protect yourself

First a message and then a call. This is how they tricked their victims.

The eight members of the organized gang who have been arrested by the Police acted from different cities such as Madrid, Zaragoza, Valencia and Orense. They used smishing and vishing techniques. That is usurped the identity of a bank via SMS, making it possible for even the victim’s mobile to identify them with the name of the entity.

The victim first received a text message informing that the victim’s account had received an unrecognized access. In this, they added a link that led to a supposed official page of the bank in which the cybercriminals requested key account data with which to gain full control of the victim’s bank account.

But the thing did not stop there. And it is that the band They also made phone calls to give greater veracity to the alleged problem with the victim’s accounts. In these calls they also requested that key data that would help them gain control of their accounts with the excuse that it would serve to fix it.

Thus, the victim was providing everything necessary to the cybercriminals so that they would have full access to their bank accounts and, therefore, be able to carry out any operation with which they steal their money. The fact that in the call received they could be identified as the real banking entity made the matter even more truthful for the victim.

The scam could still be alive, but you can protect yourself

The Police affirm that the operation is still open and that several arrests are still pending. Therefore, they do not rule out that they could continue to act and steal money following the same method. Fortunately, there are always ways to avoid being a victim.

As we always say in these cases, the key is to carry mistrust by flag and ignore that type of messages and calls in which problems with a bank account are alerted. The real notices in these cases would come through the bank’s official app.

However, in case of doubt, it is advisable to you are the one who contacts the bank through a trusted phone number or by going to a branch. Although the fact that a number identified as your bank calls you may seem plausible, we already see that this is not the case.

And of course, reporting it is key. Reporting it to the bank in case of having detected it so that they take the appropriate measures and before the authorities in case of having fallen into the trap. In the latter case, it is still recommended to contact the bank, especially so that they can cancel any movement in your accounts and thus prevent cybercriminals from seizing your money.

These car thieves were arrested thanks to some AirPods

On Reddit they have detected video games that continue to occupy several GB after being uninstalled, thanks to this useful app

The National Police frees us from a powerful scam: this is how they robbed us by copying the SIM