Qatar 2022 World Cup looks like never before in HDR 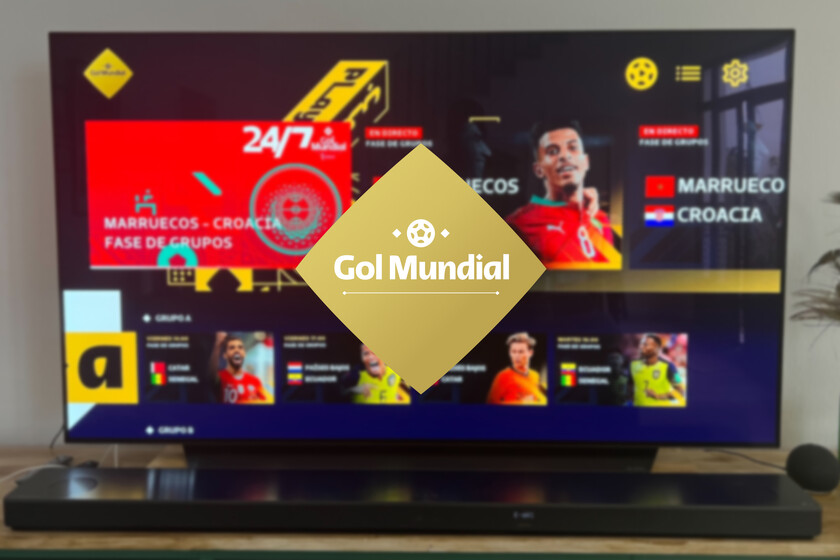 Football in 4K changes everything, and that’s no surprise. Soccer in HD has already done so, or even soccer through DTT at its premiere in Spain. The jumps in resolution in movies and series are notable, as we saw from VHS to DVD and from DVD to BluRay, or from Full HD to the current Ultra High Definition.

However, in my opinion the jumping is not comparable to what is experienced in sports. In a movie, at some distance, with high definition you already get a great level of detail of practically everything you want to show. In sports, meanwhile, there are many small elements impossible to represent with a reduced number of pixels.

The arrival of football in 4K HDR on DTT with TVE UHD and the premiere of the World Cup in 4K HDR on an OTT such as Gol Mundial is the perfect moment to review.

Watching sports in 4K is enjoying…

DTT became universal at the end of 2005 in Spain without currently contemplating the arrival of high definition, and the first televisions with a built-in DTT tuner were not compatible with high definition broadcasts. So, between one thing and another, I couldn’t watch football in high definition until Euro 2008thanks to the fact that Digital+ broadcast like this for whoever paid.

And what a jump A level of detail never seen before. A perfect definition at that time to distinguish lines, numbers, the goal net, etc. Fourteen years after that, watching sports in 4K is still a very limited paying experience, and something unprecedented in the open. It has not been a priority, despite the fact that televisions with this resolution have been the standard for many years. In addition, since 2016 almost all include a DVB-T2 tuner, which is what allows you to tune in UHD channels such as UHD Spain / TVE UHD.

If the jump to High Definition was already surprising, In sports, the jump to 4K is much more. Not only do we gain four times the level of information in the central elements of the action of the game, which is something that is greatly appreciated in shots with so much movement, but for the first time we can observe in incredible detail aspects such as the public, the wearing t-shirts, banners, etc.

In the game itself, we gained incredible sharpness on faces in close shots, on the texture of the grass, etc. For taking it to the photographic field. If with Full HD we get just over two million pixels, or two megapixels, with 4K we get an image of just over 8 million pixels, or 8 megapixels. And you just have to remember the jumps we experienced between cameras that captured one figure and another.

We went from 2 megapixels to 8. It’s very noticeable, but you have to comply technically

To this is added that in 4K We see the content on our TVs without the need to scale by software or hardware, that is, we see the native image. And with the gradual growth of panels, up to the current standard of about 65″ in new purchases, the more necessary it has become to have a more pixel-dense image. The closer you sit, the more you appreciate it.

… but World Goal does not fully meet expectations

Before the start of the 2022 World Cup in Qatar, I was flooded with the recurring disappointment of every great football event in Spain. Watching the World Cup in 4K without being a Movistar+ subscriber would be an impossible task. Gol Mundial, the MediaPro OTT that took over all the rights, did not announce that it would broadcast in said resolution on mobile or Smart TV applications. Another World Cup in low quality Full HD, I thought.

Until the surprise came. When installing World Goal on our televisions we were able to verify that it had 4K broadcasts. At last! Excited, yesterday I got ready to watch France – Australia, a real great game. And while the quality is more than decent, the excitement was short-lived.

Something was wrong. The broadcast was undoubtedly 4K, but you could see the seams. There were more compression artifacts than expected, the audience was not as defined as on other occasions, the moving scenes suffered more than necessary…

Gol Mundial’s 4K is the minimum acceptable. Or not that. But it is a great alternative to World Goal in Full HD

The quality was higher than the 1080p football I usually watch, but not much better.. There had to be an explanation, and with the developer mode of the Amazon Fire TV Stick 4K I found it. My eyes did not deceive me, and neither did Gol Mundial when saying that it was a 4K broadcast. Indeed, it is broadcast at 3840 x 2160 pixels, and at 50 fps, as it should be. The image does not deceive, the bitrate of Gol Mundial in 4K is very low for a broadcast of these characteristics.

However, the maximum bitrate is less than 9 Mbps. Although Gol Mundial broadcasts in 4K with the H.265 codec, the best there is for it, with such a low bit rate, miracles cannot be done. A good 4K broadcast stands out from around 15 Mbps, as we see on Netflix and the rest of the streaming platforms (from there upwards, with Apple TV far exceeding). In Full HD it is much more disappointing. About 4.5 Mbps and in AVC codec. Terrible image by any quality standard.

It is true that comparing live online broadcasts with streaming platforms may seem unfair, but thanks to using VPN I have been able to watch BBC iPlayer matches in 4K and the experience is very different. Without being able to measure the bitrate, what we do know is that the BBC requires 40 Mbps to watch a broadcast in Ultra High Definition. In the case of not reaching that number, iPlayer lowers the quality to 2560 x 1440 pixels. In other words, the bitrate of the World Cup on the BBC is much more (quadruple?) than the 8 Mpbs presented by Gol Mundial. And both are online, in application and live.

To give an example of very good quality in 4K, this Nadal – Federer from Wimbledon 2019 goes to 50 fps in about 20 Mbps of bitrate, and the result, despite arriving in standard dynamic range, is a real joy. You only have to look at the faces of the public:

Movistar, for its part, and through a decoder, boasts of reaching 30 Mbps in its 4K broadcasts. About four times more information delivered per second. We must congratulate Gol Mundial for this 4K that it delivers, but not because of the resolution, but because of the HDR.

HDR does make a difference

In addition to 4K, which, as we have reviewed, is insufficient for us to achieve an experience in line with what you can expect from the term, there is something in which these World Goal broadcasts do stand out, HDR. With the high dynamic range in video we gained a new much more realistic color palette for our eyes (as long as we set the TV to the correct mode and as long as the broadcast takes advantage of the BT.2020 spectrum)

But above all, we gain the ability to correctly represent the highlights (the brightest part of an image) next to shadow detail. This is key in sports, because we are used to seeing the stands burned (overexposed) when the sun hits them. The SDR (Standard Dynamic Range) image cannot correctly deliver the information contained in very bright areas while still showing players who are in shadows. In World Goal in SDR we see the goal and the stands burned, without detail. In World Goal 4K, HDR helps us to see the stands perfectly and to count the hexagons of the goal net despite the strong sun shining on it.

That, with HDR, is solved. So watching matches with sun and shade is no longer a tedious experience and with a poor image depending on which areas to get much closer to being in the stadium. The match between Croatia and Morocco, played with a lot of sun, is proof of this. On the left we see World Goal in HDR, on the right, World Goal in SDR. In addition to the white of the Croatian jerseys not being overexposed, the dark part of the field looks much better in HDR, thanks to the shadow detail that gives us the extra dynamic range.

In addition to seeing details such as the goal net, compared to not seeing them, the HDR impact is very noticeable in the Croatian kits, which shine a lot compared to not standing out especially in the SDR version. In games played at night, the same happens with the ball or the billboards. The contrast is brutal and the highlights and spotlights shine like never before.