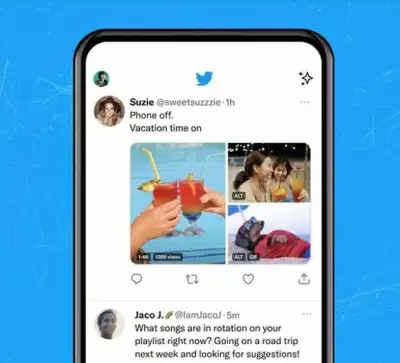 Social Media News Desk !!! Twitter is rolling out a new feature that lets users combine GIFs, photos, videos and memes into a single tweet on both Android and iOS devices. The company said it is giving everyone the ability to share multiple types of media in a single tweet. The feature will allow users to view mixed media Tweets across the web for iOS and Android globally, the company said in a blog post late Wednesday. The feature was first spotted by reverse engineer Alessandro Paluzzi in April. Previously, anyone who wanted to share different media formats had to do so in separate tweets or threads. Now, when people open Tweet Composer, they can select and upload a combination of up to four types of media—photos, memes, GIFs, and videos—and publish them all at once. They can also rearrange the layout of their media while creating the tweet, the micro-blogging platform said. Tap the photo icon in the Tweet composer to start mixing your media. The Explore tab Video currently helps people find more videos with tweets and trends that might be of interest to them. It’s currently available on iOS and Android for people in select countries using Twitter in English . The updated immersive media viewer expands video to full screen with a single click, allowing users to easily access the full, immersive viewing experience, the company said. To activate it, people who use Twitter on iOS simply need to tap or click on a video in the Twitter app, the company added.

Challenge your opponents from Hyundai! He sells the new car for 300 thousand TL, including taxes!

Elon Musk’s new plan, not only blue on Twitter, now verification badge will also be available in gold and gray color