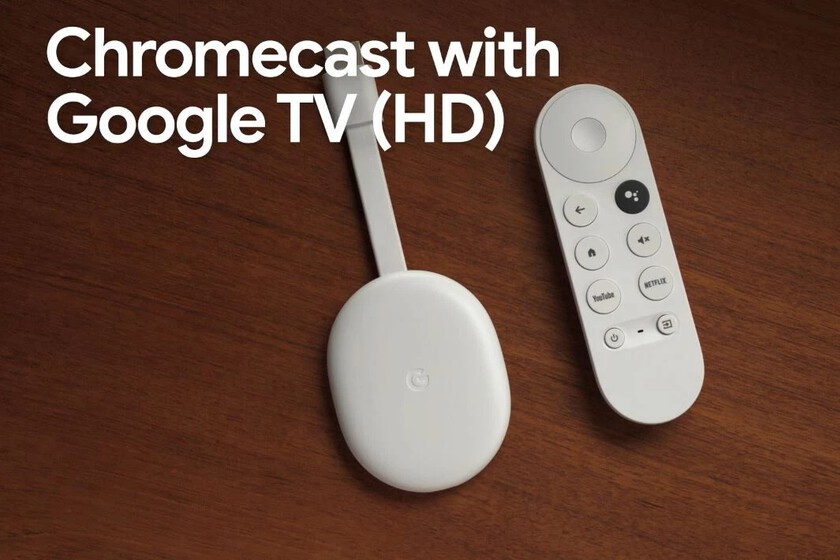 Google has finally made its Chromecast with Google TV (HD) official, allowing us to enjoy the latest version of its HDMI dongle, updated to Android 12, but limited to a maximum resolution of 1080p. The device is aimed above all at those televisions that do not have 4K resolution, designed to give a second life to an old television devoid of Smart TV functions or as a cheaper solution than its big brother.

However, even if you have a television that only outputs a signal in 1080p, you may want to reconsider purchasing the 4K model, since resolution is not the only thing you lose on this device.

Contents hide
1 Differences that are not only based on resolution
2 In some cases, the difference in price is not so much

Differences that are not only based on resolution

As we mentioned in this article, although it is a great idea to acquire an HDMI dongle or TV-Box to expand the Smart TV functions of your television, the offer is very wide and depending on your preferences and needs, you may not need the most premium device on the market if the only thing you are going to play are a few videos on YouTube and movies on Netflix.

However, in the case of Chromecast with Google TV (HD), in addition to only being able to broadcast at a maximum resolution of 1080p and not having compatibility with Dolby Vision, there are other features that may be worth reviewing before choosing him.


Despite having Android 12 as the operating system, the device only has 1.5 GB of RAM unlike the 2 GB of RAM of the Chromecast with Google TV 4K. Although a priori it is not a big difference, having a memory margin is essential when opening applications and making use of the device’s multitasking system, since the experience will be much more fluid.

Another feature that varies from its most complete version is the processor. The new Chromecast incorporates an Amlogic S805X2 CPU, with four cores and a clock speed of 1.8 GHz. On the other hand, the 2020 Chromecast with Google TV offers an improved version of this processor, an Amlogic S905D3 with a speed of 1 .9GHz and 4K compatible. In this case we are talking about a slightly lighter downgrade. In addition, considering internal storage it also has 8 GB. This decrease in specifications It is something that is noticed on certain occasions, especially if our habit is to download a good number of applications and use them. Devices that support 4K resolution usually offer higher technical specifications, so this increase in memory, processor or storage (identical in this case) can come in handy.

Another benefit of acquiring the Chromecast with Google TV 4K or any other alternative, even if we do not have a 4K TV, is that it can be useful for when in the future we decide to opt for acquiring a new television compatible with said resolution.

In some cases, the difference in price is not so much

The difference in price of Chromecast with Google TV is €39.99 vs. €69.99 What does its 4K version cost? Perhaps here we do find a somewhat more pronounced price difference to rethink this decision, although in specific offers, we have come to see the 4K version at around 35 euros. In addition, the alternatives offered by Amazon with its Fire TV Stick, or like many of the HDMI dongles with Android TV on the market, we can find options with better technical specifications at a price that is not too far from the cheapest version.

It really all depends on how you use this device. Perhaps if your goal isn’t to watch content in the highest resolution, play games at 4K 60fps via streaming, or download a stack of apps, It is not a bad decision to opt for this optionespecially if we look through our pocket.

Now, if our idea is to change our TV soon to jump to 4K, or we want a device that meets our demands in terms of technical specifications, it doesn’t make much sense to buy the cheapest version if there are better alternatives for a little more price.